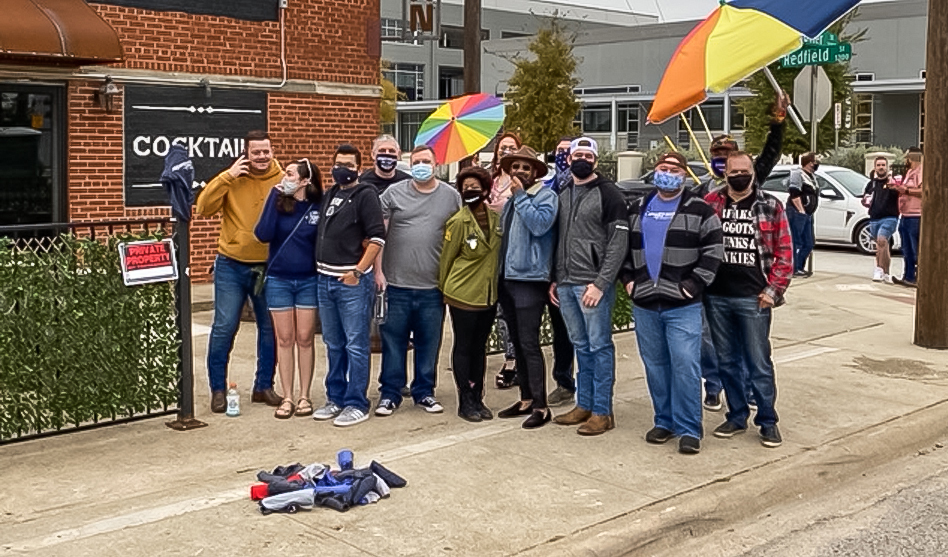 People angry over anti-gay comments made by the owners of Redfield’s Tavern last Saturday held a “funeral” outside the Medical District restaurant, which has been closed since the story first broke on Oct. 27. Redfield’s employees left their work shirts in a pile outside the restaurant on Saturday.

UPDATE: According to the website for Redfield’s Tavern, the restaurant in the Medical District has now re-opened, apparently under the same ownership.

The website’s home page starts with the statement Redfield’s owners gave Dallas Voice last week declaring that the restaurant welcomes the LGBTQ community, followed by a copy of the email sent from owner Joe Tillotson to employees, which was also published last week by Dallas Voice.

ORIGINAL POST: It appears that news of Redfield’s Tavern’s demise over the weekend was premature. Even though the name and other exterior signage on the building was painted over and the locks on the doors changed on Saturday, a message sent to employees on Monday, Oct.27, indicates the same owners are hoping to re-open, possibly as early as this weekend.

Redfield’s, located at 2213 Butler St. in the Medical District, has been closed since Wednesday night, Oct. 21, after word first broke that former manager Lindsay Schmidt had a recording of a conversation with co-owners Joe Tillotson and Scott Cecil in which they complained that she had hired too many gay men and that she needed to hire more women.

In response to a message from an employee asking about the restaurant’s status, co-owner Joe Tillotson wrote on Monday, in a message provided to Dallas Voice by someone who asked to remain anonymous: “All, we apologize for the delay in this message. Wednesday evening we were informed by the staff working that they had received threatening phone calls and so they were sent home. Since that time, operations have been temporarily suspended. We have received mixed information from our manager regarding who has quit and who has not. If you would like to continue working please respond [to the message or by email]. Regardless, if you have questions or want to discuss further then we would like to meet with you in person so please email a time you can come by the tavern.”

That source also told Dallas Voice that a local drag performer had been contacted about staging a drag show to re-open the bar this weekend for Halloween. That performer told a former Redfield’s employee she was told Redfield’s was re-opening under new — gay — owners.

Dallas Voice’s source also disputes Tillotson’s claims that Redfield’s was closed early on Oct. 21 and has been closed since because of threatening phone calls, based on what employees have said.

The source, who was not a Redfield’s employee but was present at the time, verified Schmidt’s claim in the audio that Scott Cecil’s wife made an anti-gay remark to one of the bartenders, not realizing that bartender was, himself, gay. Noting that the bartender in question is a close friend, the source said of his friend, “He’s the one the owner Scott’s wife came up to and asked, ‘When did Redfield’s turn into a damn gay bar?’ … [He] told her to get away from his bar, and her reply was, ‘Do you know who I am?’ I was sitting there when it happened. It’s a pattern of behavior from the owners.”

A separate source told Dallas Voice talks between the current owners and an unidentified prospective new owner have been suspended, at least temporarily.