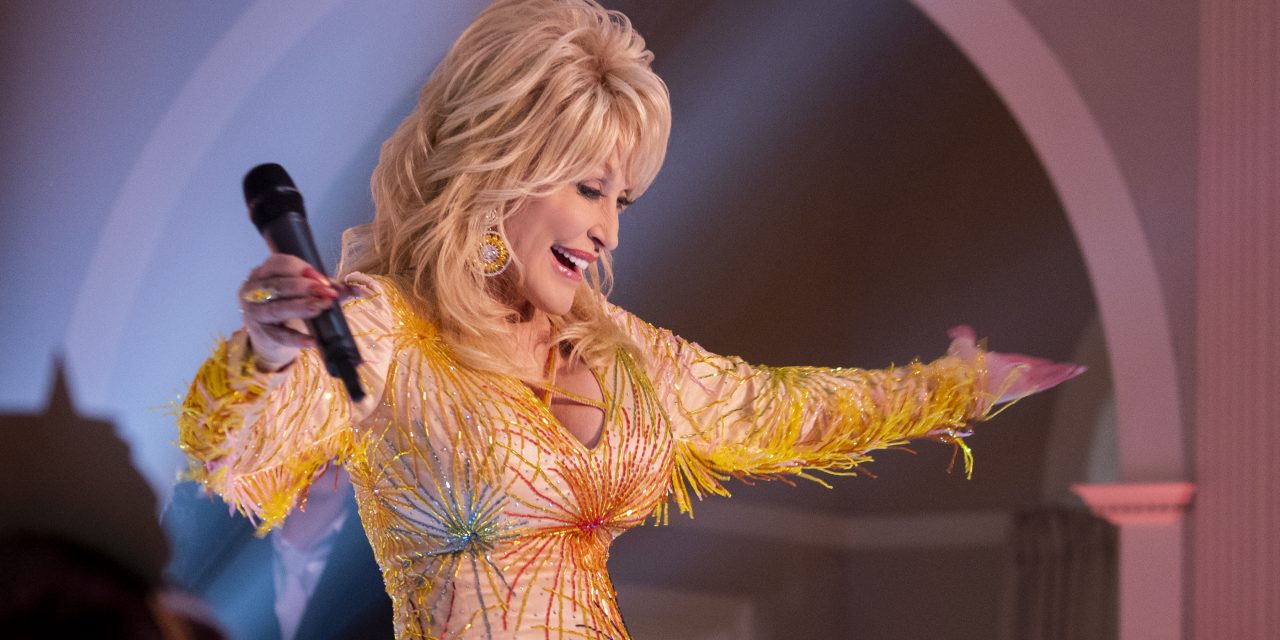 Dolly was there, almost, holding court despite her lack of humanness, as queer writers on assignment huddled giddily in front of her, awe-stricken by the realness of a fake Dolly.

I stood, out of body, piled into the country legend’s Chasing Rainbows Museum as the tech magic that is Dolly Parton’s hologram welcomed me to a Dolly shrine, perhaps the most holy site I’ve seen since my parents took me to church as a kid. A regular experience at the museum, the 3D image of our honky-tonk goddess dove-coos about holding onto special memories and keepsakes; then, she asks you to remember one thing, breaking out some a cappella lines to let you know “that I will always love you.” She blows kisses and bids farewell: “I’m outta here,” she says. And poof, there she goes, melting into the most magical cloud of blue fairy dust, falling to the floor. Dolly transforms into a soaring butterfly. Because… Dolly Parton.

When human Dolly descended upon a conference room at her DreamMore Resort in Pigeon Forge, Tenn., it was like she’d just stepped out of a Saturday-morning cartoon… or out of that holographic screen. She whooshed into our room of journalists with a hearty, “Well hello eve’ybody!” and zinged up to the front of a throng of already-seated journalists, making an astute observation on her jolly way: “Y’all like a bunch of kids: quiet, waiting for Ms. Dolly, Ms. Teacher, to come in.”

Then Ms. Dolly got down to business, talking about her new Netflix anthology Heartstrings, where lessons are carefully taught with a steady hand and her unique ability to unify America, a topic recently explored in depth by Jad Abumrad on his podcast Dolly Parton’s America (having experienced Dollywood, including some of its otherworldly cinnamon bread, I can also say he’s spot on in coining her universe the “Dollyverse”).

Expanding her ditties into full-on mini movies, the eight episodes produced for the series extend hearty lessons inspired by a mixture of both iconic and more obscure Dolly Parton songs; they gently and sneakily school the ignorant, the blissfully unaware and the downright bigoted, all told in Ms. Dolly’s preferred socio-political manner: through her stories. 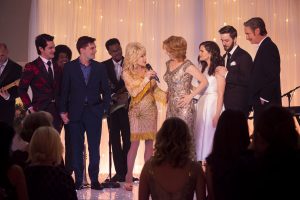 The ‘Two Doors Down’ episode, about a gay couple, debuted to controversy.

The “Jolene” episode tells the tale of the eponymous misunderstood woman that Dolly fears will take her man in the song (played by Julianne Hough), though the episode concludes that it’s the cheating men who are the real problem. Forbidden love is the crux of “Down from Dover,” centered on a young black soldier and a white reverend’s daughter during the Vietnam War. The lesson of the “Two Doors Down” episode is classic Dolly because it’s “the gay one.” If you’re a queer Dolly-head, you won’t be surprised to discover her introduction to the episode, which spotlights a same-sex love story. But your homophobic uncle might be — in fact, he might even finally learn what non-binary means and that transgender people are real people, all thanks to Ms. Dolly’s Queer 101 classroom introduction. (The episode ended up being controversial when it debuted, sparking protests from Dolly’s less enlighhtened fans.)

The “Great Unifier,” as she’s been called, introduces every episode — and it is always the best part of each installment. Here, she explains that even when she couldn’t be with her blood family on the road, she was with “a whole new family, with bands and crews that were made of all kinds of people who were different colors, gay, lesbian, transgender and all different faiths. But it didn’t matter as long as we all loved each other and got along. And we did. And we still do. Because what it all comes down to is love is love, in road families and in real families. Now life might not always be a party, but you are better off if you can just enjoy yourself, have fun and accept and love the people around you.”

What a wise teacher we have in Ms. Dolly. She reiterated a similar sentiment that day in the conference room, talking about the “golden rule” — that is, once she reached the stage. “I’m gonna need another lift,” she chirped. “These are not the kind of shoes you want to take chances in. These boots aren’t made for walkin’.” She stomped the floor, then we were off. According to Ms. Dolly, that rule is treating people right, and that if know your values, your morals, and you know what to sacrifice and what not to, “you’ll be all right.” (When asked about goddaughter Miley Cyrus, she further illustrated this point by saying: “People say you need to talk to Miley; I say, no, I don’t need to talk to Miley. Let Miley be Miley, I’ll be me and everybody needs to do their own thing.”) 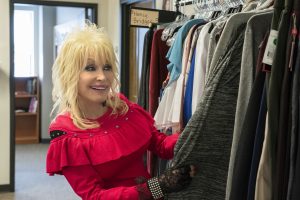 Heartstrings practices the golden rule, and like her brand emblem — the butterfly, which is everywhere at Dollywood and at the DreamMore (even the toilet paper in my hotel room was butterfly embossed) — happy endings are also ubiquitous in the Dollyverse. And so it’s no surprise that Heartstrings is an extension of that world. A world Netflix knew the streaming population needed more of, a series that Ms. Dolly said “really did tug at your heartstrings.”

In her mind, her songs are already movies anyway: “I grew up way back in the mountains, and early in my early days we didn’t even have electricity and we listened to the Grand Ole Opry on a battery radio.” She didn’t watch movies, and there was no TV, so to pass the time she would “paint pictures in my songs and tell stories,” she said. “So it was just a natural fit, I thought, to do a series based on songs that I’ve written.”

Ms. Dolly could’ve tapped into her most well-known songs for Heartstrings — you may have noticed there’s no episode centered on “I Will Always Love You” (maybe next time, she says) — but aside from featuring a few of her biggest hits, “we wanted to pick songs that are also different.” She loves Westerns and dressing up in Wild West get-ups, so since she’s Dolly Parton and she can, she did a “J.J. Sneed” episode. Also, she loves dogs and “so I had a little song I had written years ago called ‘Cracker Jack,’ so we wanted to get one of those in as well. We wanted to cover all the emotions.”

At one point during the press conference Ms. Dolly sneezed, which is a non-story except that this was Dolly Parton sneezing, so it was an event. She asked for a tissue and whooped a laugh, teaching us all another lesson: even honky-tonk goddesses are susceptible to seasonal sickness. “With this weather changin’ and all that,” she explained, before a man who was, I believe, a journalist — but looked like he could’ve easily been in one of these Heartstrings episodes — passed her a tissue. She thanked him, calling him “cowboy.”

Like she was throwing the “Cracker Jack” dog a bone, she dangled the tissue out in front of our group of journalists, joking that she was going to fling it out so someone could sell it on eBay. Non-holographic Ms. Dolly, extraordinarily human at this point, called it “star snot.”