In the shadow of omicron 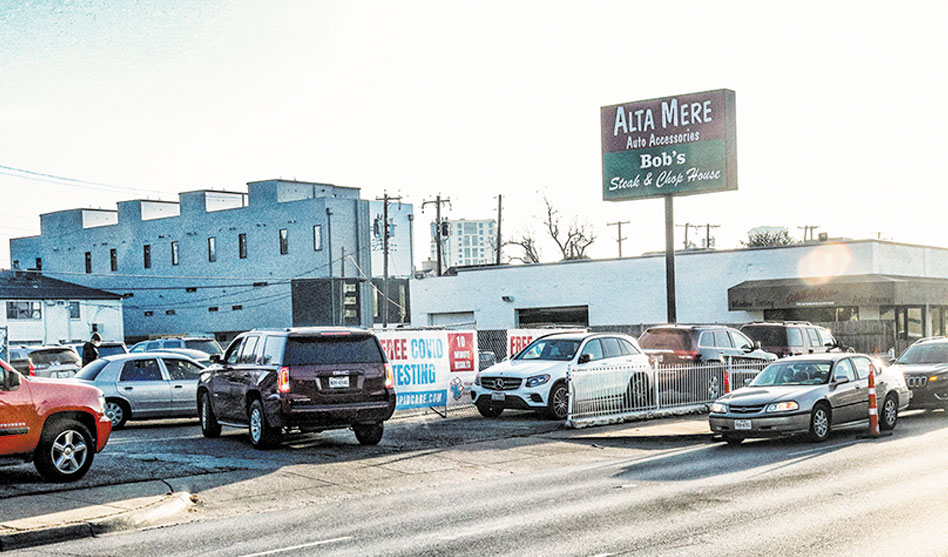 Cars line up along Lemmon at the COVID testing site. (David Taffet/DallasVoice)

Some bars are closing temporarily, but doctors believe this variant should peak sometime this month

Earlier this week, the positivity rate for the coronavirus was 33 percent in Texas. And that was expected to rise steadily over the next week.

By Monday, Jan. 3, Texas had passed the 4.75 million cases mark. By the end of the week, the number of cases is projected to pass 5 million. Nationally, 1 million new cases were reported on Tuesday.

Hospitalizations, which were going down, have doubled in the past two weeks — and tripled among children.

But there is good news: Most of that increase comes from cases of the omicron variant. Information about omicron has been changing rapidly, but most studies have found it to be less virulent than previous strains and less likely to settle in the lungs. It is, however, more transmissible — the most transmissible virus known, other than the measles virus.

And the vaccines with a recent boost protect against serious illness. Even people who are unvaccinated who contract the omicron variant, in many cases, are less sick and less likely to be hospitalized than those with previous strains.

Masks offer some protection from the omicron variant, according to the Centers for Disease Control. And a five-day quarantine should be sufficient to prevent spread of the virus.

A rapid test is recommended rather than the more invasive tests. If your rapid test is positive, you can spread the virus. If your test is negative, you may still have the virus but won’t spread it to other people. Rapid tests are available to purchase, if you can find them.

Testing is also available at several testing sites across the city, including on Lemmon Avenue in the fenced parking lot next to Bob’s Steakhouse. Look for the line of cars that usually backs up in the right lane as far as to Oak Lawn Avenue.

In New York, the omicron variant has shuttered a number of Broadway shows that just recently reopened — some closed permanently, some temporarily. Here in Dallas, it’s the bars that have been most affected, and restaurants have had to shorten their hours due to staffing shortages.

Over New Year’s weekend, Alexandre’s owner Lee Daugherty announced his bar would close until February because of an outbreak among his staff despite everyone being vaxxed and half already boosted. And Hidden Door General Manager Harvey Meissner announced that his bar, which had already closed due to an outbreak among his staff, would remain closed beyond the hoped-for New Year’s re-opening.

A handful of bars in Deep Ellum have closed as well.

Daugherty said his two employees who contracted COVID-19 are doing well. The impetus behind the decision to close for the month came from his employees, who felt they were going to get picked off by the virus one-by-one if they remained open.

“We know our decision has an impact on our guests and the community,” Daugherty said. “We felt it was necessary to take bold action. Stay safe and we’ll see you soon.”

Meissner said his employees who tested positive are now all testing negative but they’re waiting to re-open until after the current spike in cases subsides.

“I’d rather not open until the infection rate comes down,” Meissner said. He’s hoping that won’t be more than a few more weeks.

Caven spokesman Tracy Nanthavongsa said his company is keeping an eye on what Dallas County says. They’re providing rapid tests for employees who want them. Customers are taking advantage of outdoor spaces available at S4 and JR.’s, and the company is trying to keep customers safe by placing hand sanitizers around each of their bars. Nanthavongsa said their bars have higher ceilings than the bars that have decided to close and good ventilation systems.

He said the medical community is hoping it follows typical epidemic curves and will show a steep reduction once it hits its peak.

“The next couple of weeks are going to be severe,” he said, adding that he hopes we see that drop by the end of the month. Until then, he said the best protection from serious illness is the vaccine and a booster. While he said there’s no definitive evidence one booster is working better than another, it’s clear boosters are providing a good rise in antibodies.

Next, he said, wear a mask when in large groups and indoors. Surgical masks are better than cloth and double masking provides an extra layer of protection. Also, a secure fit covering both the nose and mouth add protection. Meeting outdoors is safest, but indoor locations with good ventilation are safer than places with poor ventilation.

This week, France reported a new variant, which Carlo said was “not surprising. This is what the coronavirus is going to do as long as it’s circulating among humans.”

He said there have been a number of other variants, and this new one is something to watch. But it won’t be named until it becomes a variant of concern — meaning the degree of spread, the severity and the ability to escape the vaccine.

“There are a number out there that didn’t become variants of concern,” he said.

Carlo explained the difference between a rapid test for the virus and a PCR test: The PCR test is needed for international travel. It’s a more definitive test that’s taken to a lab with results returned in 24-48 hours. A negative result is more conclusive than a rapid test.

But a positive test may mean that you have anything from a full-blown case of COVID-19 to just remaining strands of virus in the nasal cavity.

A rapid test will show if you are contagious. A positive test is more conclusive than a PCR test regarding whether you can spread the virus to others. A negative test is actually inconclusive, but at the time of the test, you are not infectious. Carlo recommends taking a second rapid test two days later to confirm the results.

Carlo said there are some potential therapies for coronavirus, but no cure. There’s limited data on Pfizer’s new anti-viral pill that’s gotten emergency authorization and, he said, we just don’t know if or how well it works on the omicron variant.

Most of the monoclonal antibody therapies that were quite effective on earlier variants are mostly ineffective on the omicron, Carlo said, although one type is showing some promise.

And for people with HIV, Carlo had some good news. He said that among Prism Health patients, those who maintain a CD-4 cell count above 200 are getting good protection with the vaccines. He said he’s seen no increase in coronavirus infection rates among those with HIV above the local averages.

Carlo said quite a bit of research is being done at UT Southwestern and Baylor. In fact, Bryan King of North Texas ID Consultants, located on the Baylor campus, will be recruiting soon for two studies directly targeting the omicron variant for subjects that have received two or three doses of the current vaccines. The studies are planned to start at the beginning of February and recruit through March. People interested in participating will be able to find more information about the studies coming soon at NTIDC.org on its Facebook page.

COVID-19 by the numbers

Newly confirmed and new probable cases of COVID-19 continued to surge in Texas as the new year began. As of 4 p.m. Wednesday, Jan. 5 — the most recent data available at press time — the Texas Department of State Health Services reported 411,489 active cases in the state. The state has seen a total of 4,018,044 confirmed cases and another 829,593 probable cases since the pandemic began.

New confirmed cases as of press time stood at 39,943, with 9,002 new probable cases. “New” means reported within the previous 24 hours. The number of new cases and probable new cases continue to trend upward.

The total number of fatalities, updated each Friday, stood at 74,888, 92 of those having happened within the previous 24 hours.

• COVID-19 Self-Testing
Self-test kits are available at many of the same pharmacies and groceries that provide pre-scheduled COVID-19 tests.
You can self-test, even if you don’t have symptoms or are fully vaccinated, in order to make decisions that will help prevent spreading COVID-19 to others.

Even if you don’t have symptoms and have not been exposed to an individual with COVID-19, using a self-test before gathering indoors with others can give you information about the risk of spreading the virus that causes COVID-19. This is especially important before gathering with unvaccinated children, older individuals, those who are immunocompromised or individuals at risk of severe disease.

A negative self-test result means that the test did not detect the virus and you may not have an infection, but it does not rule out infection. Repeating the test within a few days, with at least 24 hours between tests, will increase the confidence that you are not infected.

If you are symptomatic (feel sick), regardless of a negative test, please stay home to avoid spreading any illness to others.

For more on the CDC’s updated guidance on self-testing, visit: CDC.gov/coronavirus/2019-ncov/testing/self-testing.html.
• Dallas County Hospital Systems
Hospital emergency rooms should not be utilized for individuals needing a test only.
Parkland Hospital
Parkland Hospital has opened four community-based clinics, open 9 a.m. to 4 p.m. by appointment only, for current Parkland patients who meet the medically necessary criteria. Patients can call the COVID-19 patient line at 214-590-8060, 24 hours a day, 7 days a week or visit ParklandHospital.com/COVID19testing.
• Test Results
How long does it take to get test results? It will take 3 days to get test results back. People should follow their doctor’s instructions during that waiting time.
• COVID-19 Hotline Information
Questions about COVID-19 can be answered by calling 211 or going online to 211Texas.org.