In memory of RBG 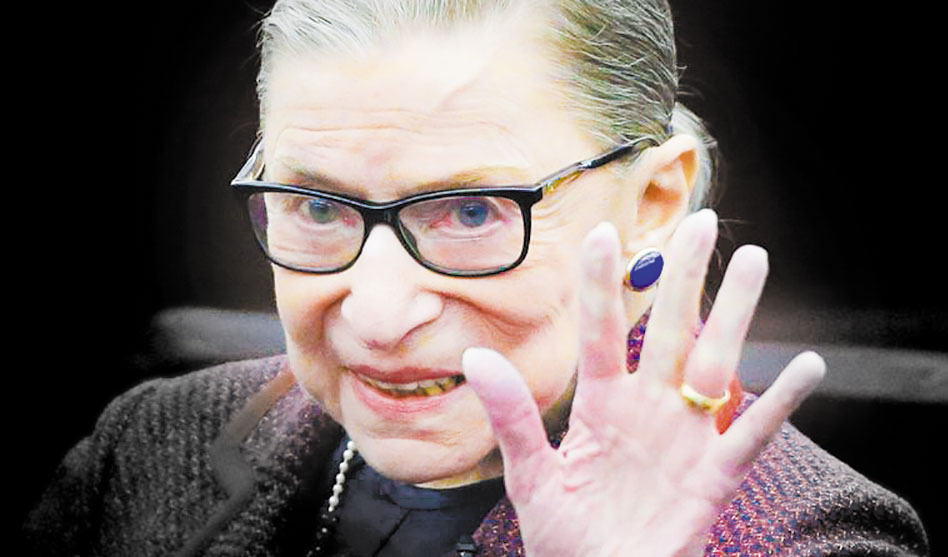 We lost a hero last week, so now we all have to step up and fight

When I learned that Ruth Bader Ginsburg had died, I was eating these little peanut butter granola bites I really like. I immediately felt like I was going to be sick. I don’t think I’ll ever want to eat them again.

The next morning, my sister sent me a photo of my four-month-old niece reaching for the image of a little woman with a bun on her head and wearing a black robe. It was a board book about RBG. That image, more than any op-eds about what her legacy meant or how Trump and Mitch McConnell would shit on it, put things in perspective for me: Every day the future seems bleaker and bleaker. But there is still a future to fight for.

Some people are feeling more hopeless than ever. Others are stepping up and getting involved in ways they never dreamed of before. If you fall into the latter category, great. Welcome. Thank you for coming.

If you fall in the former category, no judgment here. The last four years have been psychological warfare on every good and decent person. So much pain in so little time! And it’s exhausting.

But if you’re looking for something to do with your anxious energy, I highly recommend volunteering for a campaign. Find someone who is running for office who shares your values, someone who makes this current hellscape a little less shitty. And then help them win.

And here’s the thing: The top of the ticket is important, but you don’t have to choose to volunteer for Joe Biden. The truth is down-ballot races — and “down-ballot” literally means races further down the ballot underneath the presidential ticket — are just as important as the presidency. Unfortunately, down-ballot races are also the races most likely to suffer from what is called “drop-off” voting. That means someone gets a ballot, fills in the circles next to Joe Biden and Kamala Harris and then leaves the rest of the ballot blank because said voter has never heard of these other people.

Now in some states you can vote “straight-ticket,” which has nothing to do with heteronormativity and everything to do with checking one box that means, “I vote for all of the Democrats.” The Republican option also exists but, you know, gross. But, of course, not everybody does this. (Here in Texas, as of this year, straight-ticket voting is no longer an option, thanks to Republicans, who pushed through a bill to eliminate straight-ticket voting in the 2017 legislative session, and to Gov. Greg Abbott, who signed the bill into law.)

In fact, the more investment a voter feels in an election, the more likely they are to bother voting in the first place. If the only people you know on the ballot are Trump and Biden, it’s easy to think that your little vote doesn’t make much of a difference. (You would be wrong, but I understand the thinking.) But if you know that your state House candidate is a badass, and she has been knocking on doors, safely, with, say, a county commissioner candidate, you will be more invested in voting.
If you’re thinking, “I don’t have the time to volunteer, I’m trying to home-school my child while also working from home and trying not to get COVID-19,” I understand. Everybody’s busy.

But if you’re doom-scrolling through Twitter to see when Trump calls RBG a “hag” — and, really, it’s only a matter of time — then you have time to do something positive to make sure that Trump and his supporters don’t win more elections.
Another good argument for working on a state race: Should Trump manage to replace RBG with another conservative, things like abortion rights, LGBTQ protections and marriage equality are all on the line. If overturned, those will all go back to the states who can decide what is illegal and what isn’t.

Here are some of the things you can do for campaigns: Make phone calls; knock on doors — some campaigns are doing this; some aren’t. Any campaign worth volunteering with should have a strict protocol of mask-wearing and social distancing to keep you and the people you’re talking to safe. Also, write post cards, deliver yard signs, make more phone calls.

I have done all of these things and more, and I’ve lived to tell the tale. It’s not always fun — there are some people who love to call voters, for example, and those people are weird but also golden wonders any campaign would love to have — but it’s necessary work.

Nobody said defeating fascism would be easy. Let’s go.