In a spider’s web 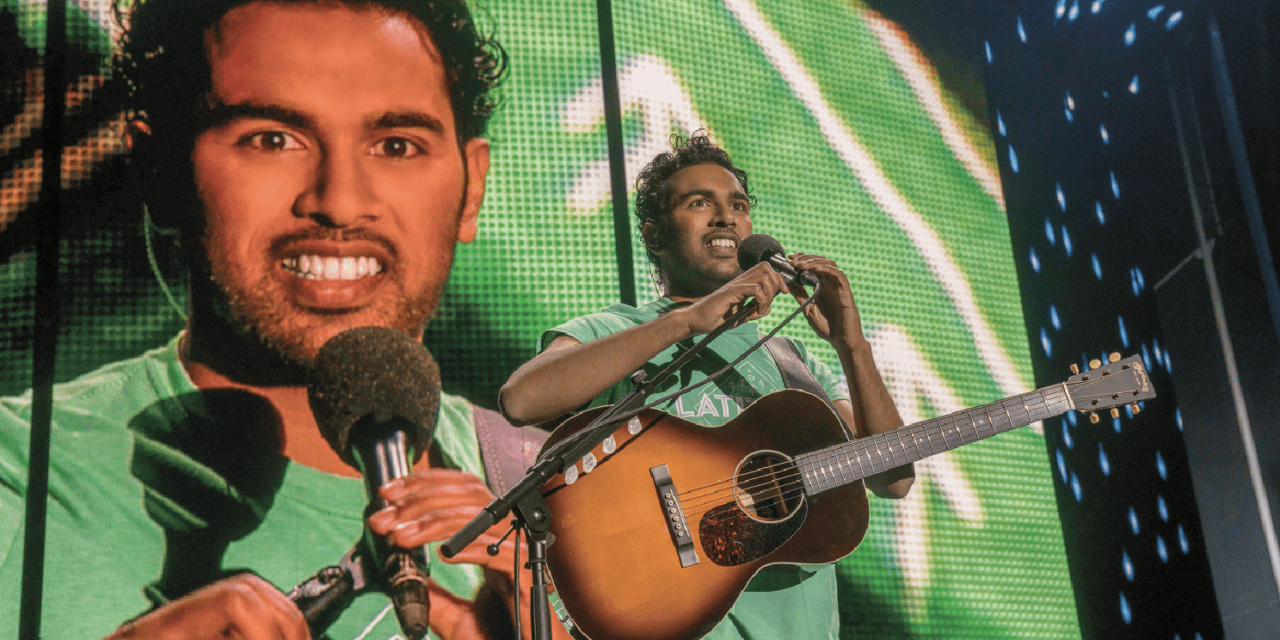 With Himesh Patel in the lead, ‘Yesterday’ could just as easily be called ‘A Star is Born.’

A winning ‘Yesterday,’ a nasty ‘Midsommar’ and Spidey ‘Far from Home’

One of the joyous dividends of Rocketman is how it reminded us of the breadth of great music Elton John produced merely by running through his catalogue (and only about half of that). Yesterday — the wonderfully joyous valentine to Britpop from director Danny Boyle and screenwriter Richard Curtis — accomplishes a similar feat with the songs of The Beatles, only without the constraints of the biopic format.

That’s because Yesterday isn’t about The Fab Four themselves, but the wonder that is their output — the best pop songs ever produced by a single band (which they did over the course of six years). The plot posits the question of whether true genius transcends an era — is a great work of art great, even if we attribute it to someone else half a century later?

That’s the dilemma faced by Jack Malik (Himesh Patel), a struggling singer-songwriter in England. His friend and manager Ellie (Lily James) is about his only fan, and he determines to quit his dream and settle into a boring life of teaching. Then something supernatural happens — a worldwide blackout, where the planet goes entirely dark for 12 seconds, during which time Jack is struck by a bus. When he awakes, he realizes he’s the only man alive who remembers the songs of John, Paul, George and Ringo: “Hard Day’s Night,” “When I’m 64,” “Let It Be” … they don’t exist on Earth 2.0 unless Jack makes them exist.

And he does. And people love them. And he begins to wonder who he really is — a great artist, or a hack plagiarist.

Yesterday is an amazingly wonderful jukebox musical that undermines the very precepts of what we think of a musical being — not about the creative process, or the use of songs as exposition, but something more meta: Can some unknown guy produce the great pop album of all time merely by recalling those who actually did it first?

The film benefits immeasurably from the presence of Patel who, despite jokes about his appearance and lack of charisma, radiates likeable charm and even a self-deprecating sex appeal. He also sings the hell out of the songs. Lily James has her best role yet as his devoted but conflicted manager who also longs to be considered a serious romantic object. Joel Fry score all the extra points as Rocky, Jack’s stoner friend and loveable loser (think Rhys Ifyans in Notting Hill… not coincidentally, also written by Curtis). The one false note in the cast is Kate McKinnon, who — despite being razor sharp — feels like a character from a different movie. She’s the lone American in the principal cast, and she projects an appalling Americaness, but the way everyone else relates to her doesn’t ring true.

The denouement also doesn’t quite work for me (happily, it doesn’t follow the it-was-all-a-dream arc), but I defy you not to choke up at key moments in the last 20 minutes. Yesterday somehow taps into our musical Zeitgeist and remind us how culture binds us together more than it tears us apart. It’s a sobering message in the Trump era.

A cult lures strangers into its fold in Ari Aster’s unpleasant ‘Midsommar.’

Writer-director Ari Aster’s feature debut last year, Hereditary, was an unexpected masterpiece of uneasy dread. Aster began his story with a family tragedy — the death of a parent — and without relying on the tropes of most horror films, he slowly, unrelentingly drew out the misery and the mystery: Was the heroine going crazy? Was her son? The Act 1 twist (another sudden death, for which the audience is completely unprepared) seemed to alter the syntax of the story we were anticipating. By the time of the resolution, the slow-burn had become a conflagration. We, like the proverbial frog in a pot of boiling water, had unwittingly allowed ourselves to be swallowed alive by the filmmaker’s emotional mind-fuck. Like a great magician, he told us what was coming, but still managed to surprise us.

It’s from that standpoint that I went into Midsommar, Aster’s follow-up, willingly denying myself any context. I wanted him to lead me down the primrose path again and pull my footing from under me. There’s a primrose path here, all right, but one lined with thorns and annoying mosquitoes. Rather than rediscover the language of horror, he seems enslaved to its tropes.

It doesn’t start out that way. The first 10 minutes represent a devastatingly smart short: Dani (Florence Pug), a high-strung college student, gets an upsetting email from her sister that sets her on edge. She calls her boyfriend Christian (Jack Reynor), who is over her family histrionics, for comfort. But his platitudes prove false — the news is bad… worse, in fact, than you can imagine.

Dani spirals into a depression as Christian — egged on by his bro-ey classmates — considers dumping her. Instead, he guiltily invites Dani to join them on their summer jaunt to Sweden, presumably to allow buddy Pelle (Vilhelm Blomgren) to visit his remote village and for studious Josh (William Jackson Harper) to research his thesis, but also to whore around Europe. But Pelle’s home, despite its bucolic, communal placidity, exudes impending evil.

The main problem is, that brooding threat kicks in about 20 minutes in, and there are more than two hours to go. Aster doesn’t dole out the terror in teaspoons, but catapults his themes from far off. You get a definite Wicker Man vibe (informed by Get Out) even before they arrive in the village, and — spoiler alert — that’s exactly what you get at the end. No real suspense, no real insight, tons and tone of needless gore. (The gruesomeness of Hereditary was shocking but minimal; here, it’s scattering like seed on a field.)

There are nods as well to Sweeney Todd, Shirley Jackson’s The Lottery, Se7en and many other (oc)cult precursors. But unlike, say, Suspiria, which burrows under your skin with artsy manipulation, Midsommar merely withholds information that any normal character would inquire about in order to startle you, and it does so with sluggish pacing. In the end, it all feels pretty anti-feminist, the manifestation of a male ego bruised by a woman. Aster’s not only experiences the notorious sophomore curse, he’s sophomoric getting there.

It follows logically that the first Marvel entry after the events of Avengers: Endgame — wherein we suffered (spoiler!) the death of Tony Stark — would focus on Tony’s lap-doggy protégé, Peter Parker aka Spider-Man (Tom Holland) coming to terms with his grief. Spidey has always been the most hormonally convoluted of Marvel’s superheroes — adenoidal, goofy, stupidly fearless but also kick-ass. But he feels emotions like a teen, as well; a sixth sense can’t replace experience and perspective. That’s already a lot to digest, but the filmmakers also took this opportunity to introduce fan-fave villain Mysterio (Jake Gyllenhaal) into the mix, potentially overloading Peter (and us) with a surfeit of expectation.

The result? Almost nothing. Spider-Man: Far from Home offers no emotional resonance (he’s more interested in banging MJ than coping with his loss), the jokes fall flat (I cracked a smile maybe twice) and the actors seem as embarrassed by it all as we do (Gyllenhaal and Samuel L. Jackson are measurably terrible). Coming on the heels of probably the best-ever superhero film (and the astonishing appeal of the animated Into the Spider-Verse), this poorly written and dull movie is the worst yet in the MCU by far.  █

THE QUEERING OF HORROR

The horror genre has been gaining in legitimacy for decades, but has really exploded in recent years, making genuine inroads into the public consciousness, often by overlaying a horror element to serious social issues. Black Lives Matter, mental illness and people with disabilities have worked their way into plots of Get Out, Hereditary and A Quiet Place. And one local production company seeks to expand that scope even further.

Producers Brock Cravy and Deiadra Armstrong have just announced the formation of a Dallas-based studio named The Contested Edge, with the commitment to producing horror, fantasy and sci-fi films that embrace queer characters and storylines.

“Being gay isn’t as taboo as it once was, except when it comes to writing gay characters,” Cravy explains when announcing the production house’s launch. The Contested Edge hopes to steer clear of the stereotypes gay characters are often relegated to in genre pictures: flamboyant queens, flirtatious friends hitting on straight men, brooding dark souls. “We want to demonstrate that you can have characters who are gay without this one trait defining their entire storyline,” he says.

Their first film, the short Momma — which Cravy describes as “a dystopian neo Western horror” — will drop in the fall, featuring a black trans hustler, followed by the development of a queer zombie picture. “What’s really exciting about Momma is the crew. We put lesbians and women of color in positions of leadership and creative spaces. I have never worked with such a diverse cast and crew.”

Learn more about them at ContestedEdge.com.