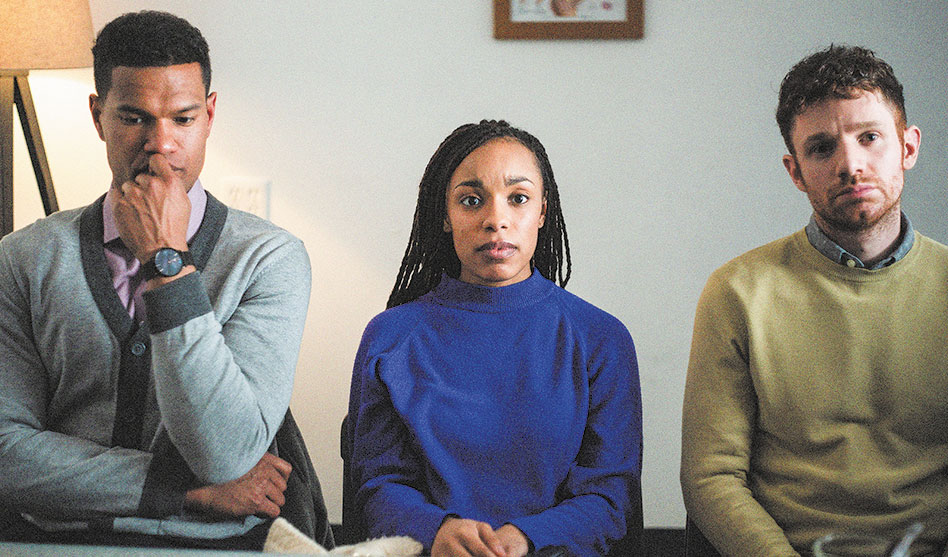 ‘The Surrogate’ intelligently confronts the dilemma of a modern family

The Surrogate begins, as most pregnancies themselves, with a sense of frantic disorientation: We start in the middle of a date, interrupted by a phone call; we jump to a bathroom and a successful pee-stick test then find out the mom is “the vessel” for a gay couple; we’re 10 weeks into the first trimester before we’re 10 weeks into the film. This is not, it seems to signal, going to be a “process story.”

Then Jess (Jasmine Batchelor), the mother-to-be, gets an amnio and learns that the fetus she is carrying for husbands Josh (Chris Perfetti) and Aaron (Sullivan Jones) has a genetic abnormality — an extra chromosome, causing Down syndrome. And things slow down a lot. Suddenly the frenzy of joy and anticipation becomes a weighty moral dilemma, one with at least three prongs, each a parent with skin in this game. We can see where this is going: How do three people make a decision about the life of their child?

Writer-director Jeremy Hersh’s debut feature is a heartwarming and heartbreaking portrait of a modern family that, despite its melodramatic bona fides, rings with authenticity. He’s best at the naturalistic dialogue, which sounds entirely improvised in its meandering detail, but makes its points and illuminates the inherent conflicts compassionately. The scenes with real Down syndrome children resonate with beauty and love, but the stakes are equally inescapable. What are the ethical implications, as well as financial and social, of ending a life because of what a test shows?

Ultimately, though, the film is called The Surrogate, not The Surrogacy — the gay couple are integral aspects, but this is really a character study of Jess, whose performance rarely hits a false note. The plot follows her journey from supportive bestie to crusader to defiant daughter. Eventually the film does track any of the tropes you expect (including a confrontation with the fathers), but that’s less a weakness than a necessary element of this kind of story. But it’s handled thoughtfully. And of course it raises specters of “normality:” What if the child had sickle cell? Or was gay? Does your opinion change if the couple made the decision based on race? (It does devolve in the final minutes, though until then it succeeds.)

The Surrogate was set to have its world premiere at SXSW earlier this year, but its debut as a streaming film does nothing to diminish its stature as a serious summer film.  █