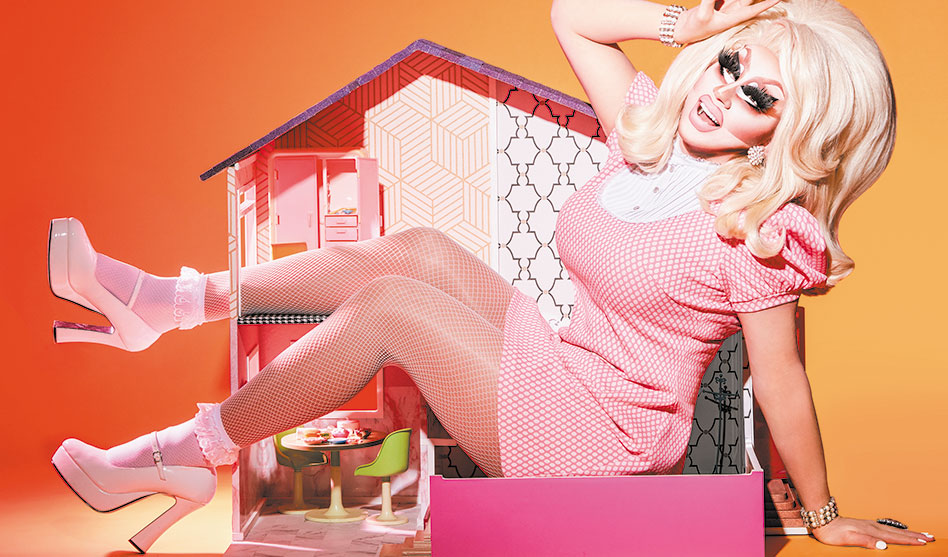 A new album, a new tour, a new book — drag queen Trixie Mattel does it all… and hopes to live long enough to enjoy it

We are chatting the day before Trixie Mattel — perhaps the most hyphenated “hyphenate” in drag outside of RuPaul herself (she does comedy, has a cosmetics line, a web series, a new music album, an upcoming book and quite possibly a presidential run or interstellar exploration still in her purse) — will set out on her national tour, so she’s spending her last day at home paying bills and, most importantly, packing for life on the road.

“When you pack for a tour, you don’t just have to get in drag once, but for months,” she sighs. “And [you have to pack] all that weird stuff you can’t find at CVS — wig glue and 99-percent alcohol and extra tights. And it’s always exciting [after you leave] to find out what key item you left behind. I’m sure it will be underwear or my phone charger or something essential. Logistically it’s a nightmare.”

It is also everything she lives for. If Trixie were to tell you she had no life outside of the limelight, you might well believe her. She soaks up the show business like sunlight.

“Being on tour gives me a reason to be,” she says. “I love having my whole reason to live being a show: I wake up, have some tea, go to the gym, think about my jokes for that night and what happened the night before. You mold [the show] as you go. You get to dig into the performance and make it perfect.”

Trixie promises her upcoming performance at the Bomb Factory will be the best yet. And it seems possible. She doesn’t leave much to chance. For the upcoming tour, she designed her own wigs and costumes, specifically to make them “travel-friendly” (most are collapsible; all the wigs merely attach to a foundation wig, “and then you can stack on an up-do or a flip,” she explains). In fact, she acknowledges her near-obsession with details — and the variety of enterprises she’s engaged in — cannot be good for her.

“I was just telling my boyfriend, I need to pick a lane,” she says. “I am so deeply fulfilled by doing records, and when I do standup, I’m alive. And I love my makeup company. But that’s three different careers. Maybe I want to die young.”

If she does die soon, she’ll still have gotten in a lifetime of work. She talks with the speed of a crack addict, interrupting and blurting out ideas as fast as she can think them. She can rattle off her own CV like she’s aiming to win a rap battle. And nothing seems to be off-limits. Even though her victory on the third iteration of RuPaul’s Drag Race All Stars was a comparative lifetime ago, she’s happy to talk about it. When I tell her, with the utmost respect, that I was rooting for Shangela, she interjects: “Were you shook? Was she robbed? I thought so. I would have voted for her! I mean, you lose to someone like Shangela, and it’s no shame. It’s so crazy. Once Shangela was in the top it was like, ‘Fuck.’ But I’m glad I won.”

You see, what we mortals call simply “Trixie Mattel” isn’t just a drag queen, but a brand — an entity in and of itself — and one her alter ego (born Brian Michael Firkus) is determined to make a success.

“I worked so hard for so long for so little money, far be it from me if I see an opportunity not to take it. I just turned 30 and still dress like a slutty little girl for a living. I’m at an age where everyone like me is either getting married or having a baby — they all have different checkpoints for what an adult looks like. Am I a grownup? I guess. But my place is filled with Barbies. You know what the paint color in my living room is called? Baby Girl.”
Right now, though, her proudest achievement is Barbara, her just-dropped new LP of original music. When I mention that it sounds “like very happy beach music, sort of like Fountains of Wayne,” Trixie all but explodes over the phone.

“Oh my god — that was my goal. I. Love. Fountains. Of. Wayne! You know why it sounds like that? Because I grew up worshipping the ground Adam Schlesinger walks on. It’s like power pop from 2000, but really references the 1960s — very sugary and light and sincere but not curing cancer. The music has meaning but a sense of humor about itself. It’s the sound of sunshine,” she says.

Although when she began doing drag, she always did lip-sync, Trixie insists she’s not faking her interesting music.
“I have been playing guitar since I was 12. Before I was a drag queen I wanted to be a songwriter like John Mayer; I wanted to be Michelle Branch, to be Sheryl Crow. But standup and guitar go so well together. I’m not a drag queen that decided later to be a musician — this is definitely in my wheelhouse.”

So much so that her performance will feature a combination of her skills.

“It’s like an hour of comedy and 30 minutes of music. But it’s integrated. My audience is so diverse — some people love me because of records, some because of Drag Race some from my YouTube show. No matter why you’re there, there is something you will like. It should run about an hour and a half… an hour and 15 if the audience is not laughing.”