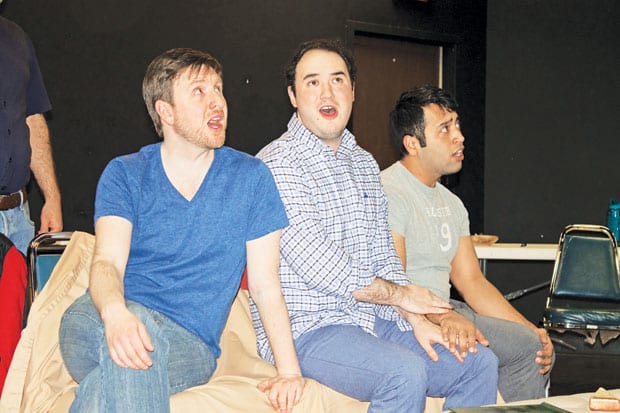 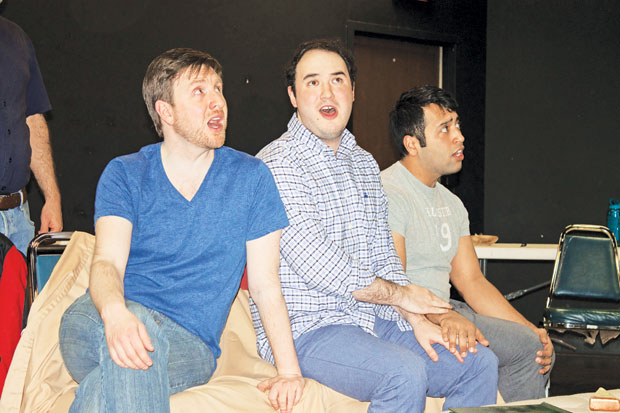 WORDS, MUSIC AND HEART | The presentation of ‘Alexander’s House’ ended up being a collaborative effort, with members of TCC’s Chamber Chorus teaming with local actors and a director, to put on the performance this weekend at the Latino Cultural Center. (Steve Ramos/Dallas Voice)

When the Turtle Creek Chorale’s artistic director, Trey Jacobs, first saw the play-with-music Alexander’s House, it hit close to home. The story — about a gay man who passes away, leaving behind his partner, friends and a son who all have questions — resonated with Jacobs, who is a father himself. He felt immediate empathy for the characters.

“I remember being so emotional because there is such tenderness in this story,” Jacobs says. “I was separated from my son when his mom and I divorced. Even though I saw him for most holidays and summers, I still missed being with him day-to-day. And so [it is] in Alexander’s House — Alex never had any relationship with his son, Sam, but I think that he wanted to have one so much that even in his death he would bring Sam into his world.”

Jacobs now has the opportunity to share his affection for the show. In a collaborative presentation with the Latino Cultural Center, the smaller chorus of the TCC is presenting it as a two-night production. And while it’s not the usual chorale show, it marks a new direction for Jacobs’ vision as artistic director. He emphasizes the mission of the chorale to create extraordinary experiences for its audience, and with Alexander’s House, this fits right in.

As a partnership, Jacobs has worked in tandem with stage director Ann Nieman, whom he handpicked to marshal the show.

“We had a wonderful conversation about the piece, its development for the Gay Men’s Chorus of Washington, D.C., and Turtle Creek Chorale and it just felt like a project that I thought should be given a voice, as it were, and felt excited to be approached by Trey to have a hand in it,” Nieman says.

As a process, Jacobs sees it only as amazing. Mixing the chorale with “some of Dallas’ finest actors,” the show features both drama and comedy with music for a profound theatrical experience.

Jacobs expresses confidence in Nieman’s work ethic, crediting her with lovingly guiding the play, while associate conductor Sean Baugh is helming the Chorale’s Chamber Chorus. It would appear this is several matches made in heaven for the parties involved.

“Sean and I have been working closely, and I’ve enjoyed every moment of it,” Nieman says. “There are a few spoken lines delivered by some of the members of the chamber, and I have given them one-on-one direction for that.”

Alexander’s House stems from the GALA Festival two summers ago.  Jacobs saw it when the Washington Gay Men’s Chorus performed it in Denver. As powerful as it was for Jacobs to see, he expects the show would have as much impact on Dallas audiences regardless of their position in life. This is ultimately a story about humanity.

“I’m a sucker for a story of acceptance and love,” he admits. “I hope that our audiences will come out of these performances with hearts that are full. I think that there are elements of the five characters in the show that every person will relate to in some way and that a story of acceptance, forgiveness, and dealing with the loss of a loved one and stages of grief is something that all of us have had to deal with at some point.”

Nieman agrees. She also sees it as a sort of historic social study and hopes that younger audiences will check it out for a unique experience.

“I think it’s important that younger people understand that there was a time — not all that long ago — when being gay was not readily accepted, and many people, gay and straight, had to make some very difficult choices in their relationships,” she says. “It’s important to shine a light on that experience, and how wrenching it could sometimes be. And also, the music and lyrics are very good.”

Chorale celebrates 34 years
Earlier this week, while rehearsing for their upcoming concert and CD recording, members of the chorale paused to blow out the candles in a cake commemorating 34 years of music. Congratulations!

This article appeared in the Dallas Voice print edition February 21, 2014.