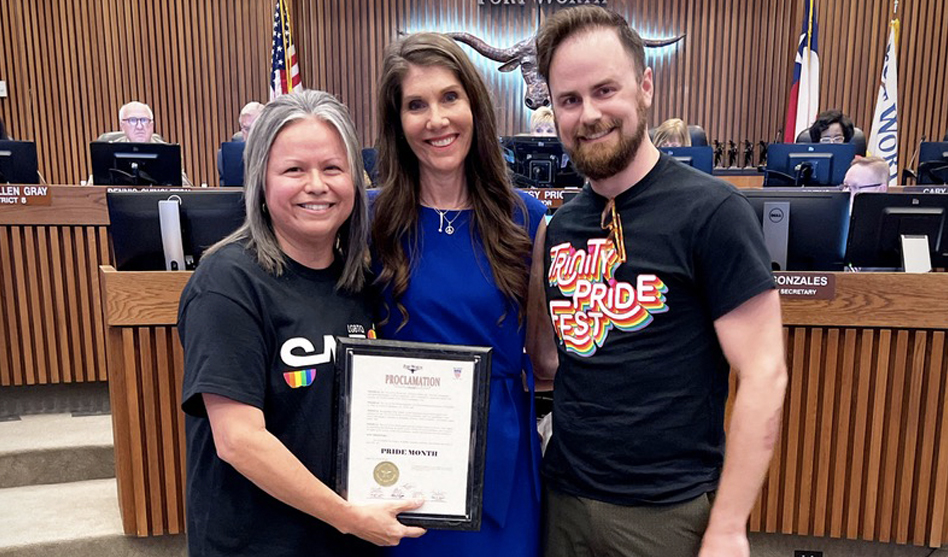 The Fort Worth City Council this week issued a proclamation honoring LGBTQ Pride Month. Sharon Herrera with LGBTQ S.A.V.E.S., pictured left, and Tyler Long with Trinity Pride, right, accepted the proclamation from Councilmember Ann Zadeh. Felipe Gutierrez, president of Tarrant County Stonewall Democrats, said, “I’m a proud and out Fort Worth resident and enjoy uplifting our local LGBTQ organizations. We celebrate Pride and promote self-affirmation, dignity, equality, and increased visibility of lesbian, gay, bisexual, transgender and queer people in Fort Worth. I’d like to wish everyone a Happy Pride Month!”

The city of Coppell this week issued a proclamation honoring Pride Month, likely it’s first-ever recognition of Pride Month, according to a Coppell resident who attended the meeting during which the proclamation was issued. A large crowd of families and youth people waving rainbow Pride flags was present for the near-unanimous vote on the proclamation. But the vote was not without a bit of controversy: The lone holdout was Councilmember John Jun, who abstained from the vote after reading a lengthy statement explaining why he was choosing to abstain.

The Rowlett City Council also issued a Pride Month proclamation, despite opposition by some who showed up at the council meeting to complain that they were offended by the proclamation. Rowlett went a step further and  marked Pride Month by lighting up the city’s water tower in rainbow-colored lights.