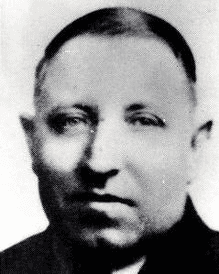 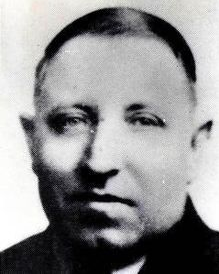 Henry Gerber was born June 29, 1892, as Henry Joseph (maybe Josef?) Dittmar in Bavaria. He changed his name to Henry Gerber when he emigrated to the U.S. in 1913, when he was 21. He and other members of his family located in Chicago because of the huge German immigrant community there.
Early in 1917, Gerber was committed for a short time to a mental institution because he was gay. But after the U.S. declared war on Germany on April 2, 1917 and entered World War I, Gerber — like other German immigrants — was given the choice of being declared an enemy alien and locked up (you know, like what happened to a lot of Japanese-Americans in World Word II), or enlisting in the Army. Surprise, surprise, Gerber chose to enlist in the Army.
Gerber was assigned to work as a printer/proofreader with the Allied occupation forces in Coblenz, and spent about three years serving in the military.
During that time in Germany, Gerber learned about Magnus Hirschfield and his Scientifc-Humanitarian Committee, and their efforts to repeal Germany’s Paragraph 175, the law that criminalized sex between men, and which was responsible for keeping many gay men imprisoned following World War II, even after other prisoners in the Nazi concentration camps were freed. Gerber also spent some time in Berlin while he was stationed in Germany, at a time when Berlin had a thriving gay subculture.
When he got out of the Army, Gerber returned to Chicago and went to work for the U.S. Post Office there. But he didn’t forget what he had seen and learned in Germany, and in 1924 Gerber founded the Society for Human Rights, the oldest documented LGBT organization in the country.
Gerber filed for and received nonprofit status for his new organization, and African-American clergyman John T. Graves signed on as president. Graves, Gerber and five other men were named as members of the organization’s board. The state of Illinois granted the Society for Human Rights its charter on Dec. 10, 1924. Gerber also started “Friendship and Freedom,” the SHR’s newsletter, which is the first known gay-interest publication. It only lasted for two issues, as most SHR members were afraid to have it mailed to their homes.
Gerber and Graves and the other board members decided to limit SHR membership to gay men, specifically excluding bisexuals. Unfortunately, SHR Vice President Al Weininger was married with two children. And Weninger’s wife reported SHR to a social worker in the summer of 1925, calling them “degenerates.”
Gerber was interrogated by police, who arrested him, Graves, Weininger and one other man. Even though Gerber was tried three times, charges against him were eventually dismissed. Still, it ruined his life: Defending himself cost him his life savings and he lost his job for “conduct unbecoming a postal worker.”
And the Society for Human Rights was destroyed in the process.
In 1927, Gerber traveled to New York, where a friend introduced him to an Army colonel who convinced Gerber to re-enlist. He served until 1945 when he received an honorable discharge. During that time, he ran a pen pal service called “Connections,” most of the members of which were heterosexual.
After leaving the military, Gerber lived in New York wrote for a number of publications, occasionally writing about the case for gay rights. Sometimes he used his own name; sometimes he wrote under the pen name Parisex.
Gerber also corresponded extensively with other gay men, discussing strategies for organizing and for addressing prejudices against gays.
Toward the end of his life, Gerber moved into the Soldiers’ and Airmen’s Home in Washington, D.C., dying there on Dec. 31, 1972, at the age of 80.

Gerber was inducted into the Chicago Gay and Lesbian Hall of Fame in 1992, and The Gerber House was designated as a Chicago Landmark on June 1, 2001. Chicago’s Gerber/Hart Library is named in honor of Gerber and another early defender of gay rights, attorney Pearl M. Hart.
Recognition of the Gerber house will acknowledge the extraordinary significance of 1710 North Crilly Court not only to LGBTQ citizens but to America’s own account of its civil rights struggles, according to a press release from Rainbow Heritage Network, a national association for those concerned about the recognition and preservation of lesbian, gay, bisexual, transgender, and queer history and heritage.
The Henry Gerber House nomination was prepared by Jonathan Farr, Amanda Hendrix-Komoto, Andrea Rottmann and April Slabosheski, graduate students at the University of Michigan, as part of the University of Michigan Public History Initiative. Their advisor was Dr. Michelle McClellan.
The nomination was presented to the Landmarks Committee by Amanda Hendrix-Komoto. The nomination was written as part of the National Park Service’s LGBTQ Heritage Initiative, which was announced at Stonewall by Secretary Jewell in May 2014. Mark Meinke, co-founder of the Rainbow Heritage Network and Megan Springate, prime consultant for the LGBTQ Heritage Initiative and co-founder of the Rainbow Heritage Network, were among those who spoke in support of the nomination.
There are only six places recognized by the National Historic Landmarks and National Register of Historic Placesprograms for their association with LGBTQ history: Stonewall Inn in New York (a National Historic Landmark), The National AIDS Memorial Grove in San Francisco (a National Monument), and Carrinton House in New York, Cherry Grove Community House and Theater in New York, the Dr. Franklin E. Kameny Residence in Washington, D.C., and the James Merrill House in Connecticut ( all on the National Register of Historic Places).
You can see the Gerber House nomination here.
The National Park Service LGBTQ Heritage Initiative is online here.