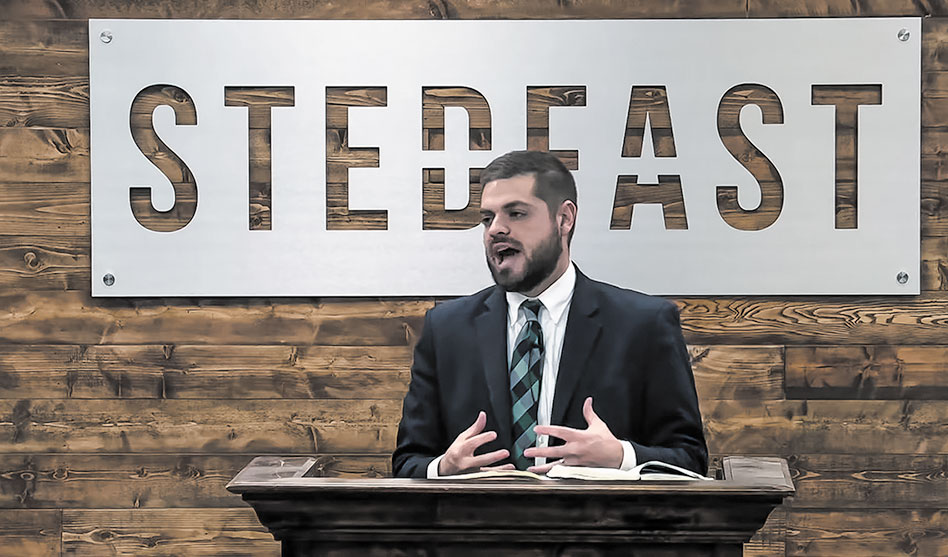 Stedfast Baptist, led by hate preacher Jonathan Shelley, is at the center of a lawsuit over who controls the church and whether its funds have been misused

Stedfast Baptist Church — now located on Denton Highway in Watauga — is a small, “independent fundamental King James only” church known around the country for the virulently and violently anti-LGBTQ video sermons its preachers post online.

Just in recent weeks, after preacher Dillon Awes posted a video declaring LGBTQ people should be lined up against a wall and shot in the back of the head, a church member was cited for shoving a protester in the parking lot of the strip center where the church is located, and church officials reported that someone had shattered the church’s glass front door and spray-painted “faggots fight back” on the sidewalk.

But it appears, based on court documents and other sources, that the chaos surrounding Stedfast isn’t just external: There is a legal battle being waged over who actually controls the church and how donations to the church are being used.

History of hate
Chaos, hate and attention aren’t new to Stedfast Baptist, of course. It all started almost immediately when pastor Donnie Romero was starting out in a small home on Fort Worth’s northwest side. In a video since removed from YouTube for violating the website’s terms of service, Romero in December 2014 declared, “I’m not going to let these dirty faggots in my church. They’re all pedophiles.”

Romero was reportedly ordained and then sent to North Texas by Arizona hate preacher Steven Anderson to found Stedfast. And in 2016, when a gunman murdered 49 LGBTQ people and allies celebrating Pride Month at the Pulse nightclub in Orlando, both preachers responded as hatefully as expected, with Romero saying in a sermon that the Pulse victims deserved to be gunned down and that he was praying for the 53 people who survived the massacre to die as well.

That prompted a group of outraged LGBTQ and allied activists to gather on the morning of Sunday, June 26, for protest across the street from the church, then located in a strip center on the Jacksboro Highway in the tiny enclave of Sansom Park. The protesters wanted, said organizer Karen McCrocklin, to make a peaceful response to a hateful protest.” When the protest plans were announced, Romero responded that his church members carried guns and would use them to protect their church.

In January 2019, though, Romero was forced to resign as pastor after he was caught gambling, having sex with prostitutes and doing drugs. But anyone who thought the church might change directions was disappointed when Jonathan Shelley took over as pastor and continued its tradition of hate. Shelley eventually moved the church to a strip center in Hurst, and in 2021, a group called No Hate in Hurst formed to stage peaceful protests on the sidewalk across the street every time the church held a service.

Eventually, Shelley’s dangerously hateful sermons and the persistent protests prompted the landlord at the site to begin eviction proceedings. The eviction was finalized in February of this year, and Stedfast moved to its current location in Watauga. When Awes posted his video sermon in late May calling for LGBTQ people to be arrested, tried and then executed by being lined up against a wall and shot in the back of the head, No Hate in Hurst was reconstituted as No Hate in Texas and the protests continued. 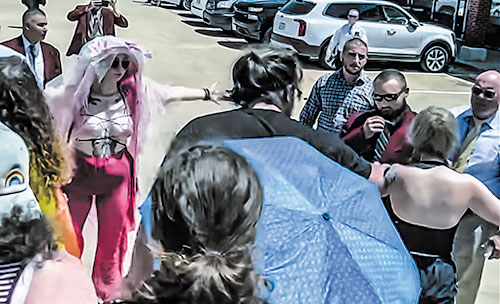 When church members confronted protesters outside Stedfast Baptist recently, one church member was cited after shoving a protester

This time, though, protesters decided it was time to be more vocal. Instead of quietly carrying signs and drawing messages on the sidewalk in chalk, they were chanting slogans, using a bullhorn to amplify their anger at the church. And on June 12, when a group of men from the church — at least one of whom was carrying a handgun visible in a holster at his waist — came out to confront them — the shouting match turned physical: One of the church members, identified to Dallas Voice as Ryan Urbanek, shoved a protester who was standing with her back to him, arms outstretched to block his view of other protesters. Urbanek has since been cited for assault.

Since then, church members and protesters have appeared at a Watauga City Council meeting to make their cases to city officials, and church officials reported the vandalism at their meeting space.

Behind the scenes
As messy and hectic as the situation has been publicly though, it appears that things have been just as messy for the church behind the scenes.

According to court documents obtained by Dallas Voice, Shelley and the church filed suit on Oct. 5, 2021, in a Tarrant County district court against three people — including Donnie Romero’s former wife Leslye — claiming that the three had fraudulently represented themselves as the church’s board of directors to take control of Stedfast’s bank accounts and try to oust Shelley as pastor. In Shelley’s petition, when he was installed as pastor in January 2019, he was appointed as a director along with Kevin Edelman and Ryan Urbanek. Edelman, he said, resigned from the board the following month and was replaced with Keri Shelley.

However the three defendants — Leslye Romero, Seth Bookout and Ryan Gallagher — have a different story. In their response, the three claim that they are the actual board of directors and that they fired Shelley as pastor nearly nine months ago after discovering that he had been using church funds to pay his personal expenses.

Shelley’s original petition claims that Donnie Romero stepped down as both pastor and as a member of the board in January 2019, and that Leslye Romero and the then-third board member Robert Starnes also resigned at the same time, and that Bookout was excommunicated from the church in June 2019 and has since that time used social media to publish “defamatory statements” about Jonathan Shelley, Stedfast Baptist and members of the church.

Jonathan Shelley also claims that Leslye Romero, Seth Bookout and Ryan Gallagher falsely presented themselves as the members of the board of directors in September 2021 to illegally take control of the church’s numerous bank accounts and denying him, Keri Shelley and Ryan Urbanek access to the funds.

The defendants, however, say that Leslye Romero and Starnes never resigned from the board, and that it wasn’t until last year that Leslye Romero, concerned over Shelley’s continuing and escalating hate rhetoric and the lawsuit the church faced from the landlord at its property in Hurst, decided to take action.

At that point, the defendants say, Leslye Romero asked Starnes to attend a board meeting. When he refused, Leslye Romero — as the only remaining board member — voted Starnes off the board and voted Bookout onto the board. They then asked Gallagher, who has never been a member of Stedfast but has been a member of other churches affiliated as Stedfast is, with the New Independent Fundamentalist Baptist Movement and had helped Stedfast in the past with certain issues, to join them as the third board member.

The defendants claim that after finally gaining access to the church’s bank account records, they discovered that Shelley was misusing church funds. The three board members then voted to fire Shelley as pastor, effective Sept. 23, 2021.

The defendants wrote in their answer to the lawsuit, “It is believed that Jonathan Shelley has diverted funds, and used church funds to pay personal expenses, household expenses and other items unrelated to the church in an amount in excess of $180,000. Repeated attempts to obtain an accounting of church funds have always been met with delays, excuses, threats and in some cases pronouncements of excommunication from the church by Shelley. To this date, no adequate financial accounting has been made to the congregation or to the board of directors of Stedfast Baptist Church.”

They say that even though he was fired by the board last September, Shelley has continued to represent himself as pastor of Stedfast Baptist, and that he filed “fraudulent documents with the Texas Secretary of State alleging to replace the current members and board of directors of Stedfast Baptist Church. This is in spite of the fact that he has never held a position with the church other than pastor and as agent for service of process with the church.”

They also charge that Shelley has “been conducting sermons to the congregation, on YouTube and to the general public that Seth Bookout, Ryan Gallagher and Leslye Romero are felons, criminals, have misused funds and are engaged in other illegal conduct. Additionally, he has suggested that members of the congregation take them out, that no one would suffer a loss were they to be killed or that no one would shed tears were they to be shot. He has additionally said that the defendants should kill themselves.”

Shelley has denied those allegations.

The defendants, who say they are concerned about the possible ramifications of the ongoing hate rhetoric coming from Shelley and Awes and others affiliated with the church, told the court they want to “wind up the corporation, resolve issues of access to funds, resolve and pay all outstanding debts and disburse the remainder of funds as appropriate under the law and at equity.”

In other words, they want to shut down the church.

Defendants have asked that the court dismiss Shelley’s lawsuit, a request the judge has so far denied.

Defendants have appealed that decision.

While the dispute continues to make its way through the courts, funds in the church’s accounts are under control of the courts, a source told Dallas Voice, with only a set amount available each month to Shelley and other church officials to pay Stedfast’s monthly bills.