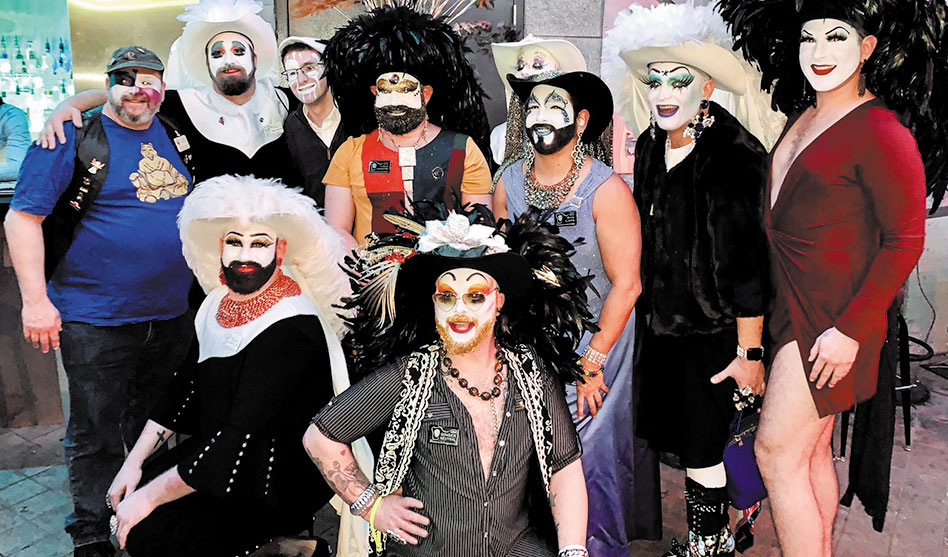 The DFW Sisters are on a mission. (Photo courtesy Sister Alley Gations)

Always on the lookout for new ways to serve their community, the DFW Sisters of Perpetual Indulgence will take to the streets of Oak Lawn, Deep Ellum and the area around the Farmers Market on Saturday, Feb. 8, handing out Blessing Bags to the homeless. And the Sisters are inviting others to participate with them in this mission and others as they gear up for their 10-year anniversary.

Sister Alley Gations, Mistress of Events for the Abby of the Lone Star, said the sisters will be out in full force and in full face for the event. They will be distributing the Blessing Bags — containing things like protein bars and other snacks, toiletries, socks, beanie hats — from about 3-7 p.m. that day. 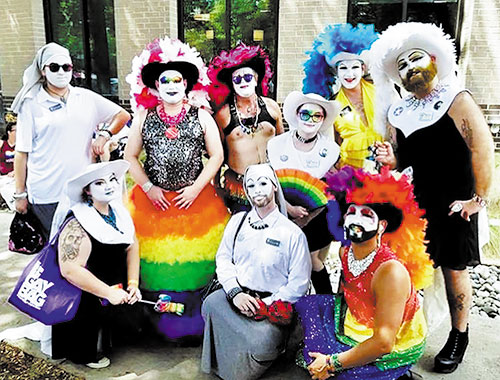 The bags will also include the Sisters’ well-known “Bliss Kits,” which include condoms, lube, a peppermint and a whole lot of information on topics regarding everything from where to get tested for HIV and where to get treatment to where to find food, shelter and clothing.

Sister Alley said “we came up with the idea” of the Blessing Bags “as a house,” and then one of the novice nuns took it on as their “the senior project.” Alley said the sisters will be handing out “about 100 bags” over the course of the afternoon and early evening next weekend.

While many of the Sisters’ projects and events are specifically aimed at the LGBTQ and/or HIV/AIDS communities, Sister Alley said they are always looking for new communities to help and new ways to help.

“A lot of the time we [in the LGBTQ] community don’t really acknowledge homeless people that we see. A lot of people don’t want to associate with homeless people or be around them or interact with them. There’s such a stigma behind being homeless, and too often we just ignore them,” she said.

“And most of the Sisters’ events happen in bars and at other places where homeless people usually aren’t welcome,” she continued. “So they don’t ever really get to enjoy the things we do for the community. Besides the fact that we wanted to help get them things and information we need, we wanted to also give them a chance to kind of ‘bask in the glory’ of a Sisters event. We want them to have the same opportunities we have to have fun.”
DFW Sisters donate regularly to well-known organizations in the LGBTQ community. Last year, Sister Alley said, they gave about $3,000 to Resource Center, and a recent event in Fort Worth raised money for the Office of Veterans Affairs.

“All our events are focused on helping people, raising money for the community, but we try to branch out. One of the things we think about is, who have we not helped? Women’s shelters? Veterans Affairs? Trans men? Trans kids? The deaf community?” Sister Alley said. “There are times when we want to make sure that the money we raise is going to a demographic or to an organization we’ve not worked with before. We want to give everybody a chance to get a piece of the pie.”

It’s a pie that has been baking around the world for about 40 years, and here in Dallas for 10 years. Sisters of Perpetual Indulgence was founded in San Francisco in 1979 as a charitable and activist organization using drag and religious imagery to make its point. According to the organization’s website, “The Sisters of Perpetual Indulgence are a leading-edge Order of queer and trans nuns. We believe all people have a right to express their unique joy and beauty. Since our first appearance in San Francisco on Easter Sunday 1979, the Sisters have devoted ourselves to community service, ministry and outreach to those on the edges, and to promoting human rights, respect for diversity and spiritual enlightenment. We use humor and irreverent wit to expose the forces of bigotry, complacency and guilt that chain the human spirit.” The mission of the Sisters, the website says, is to “promulgate universal joy, expiate stigmatic guilt and serve the community.”

There is no single, central authority or seat of power; each House is autonomous, with its own habits, culture and rules. There are 45 houses in 26 U.S. states (and one multi-state order); seven United States Missions, and 22 Houses and/or Missions outside the U.S.

Three of the Houses are here in Texas; in addition to the DFW Sisters, there are the Weird City Sisters in Austin and The San Antonio Sisters, Abbey of the Alamo. There is also one Mission in Texas — The Space City Sisters in Houston. Sister Alley said there is also a House starting in El Paso.

The DFW Sisters — the largest House in Texas with 25 fully professed members, 15 sisters emeritus, eight novices and two postulants, according to their website — celebrate their 10 anniversary on Easter Sunday this coming April, and Sister Alley said the nuns have a ton of big events planned to mark celebrate their first decade. And while the application process to become an actual Sister takes time, Sister Alley wants people to know that she and the other nuns are always looking for volunteers to help out at all their events. “All you have to do to get involved as a volunteer is go to the website and fill out a form,” she said.

For more information on volunteering with the Sisters or becoming a Sister, and for a full schedule of upcoming events, visit DFWSisters.org. DFW Sisters membership is open to people of all genders and all orientations.