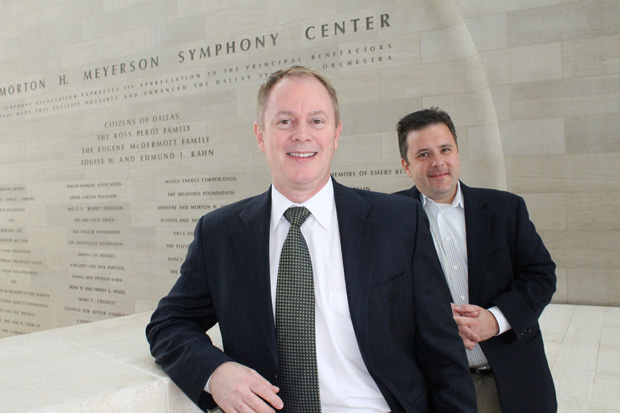 SYNERGY OF NECESSITY | Trey Jacobs, front, was chosen as the interim conductor of the Turtle Creek Chorale only weeks after David Fisher, rear, assumed his position as its new executive director. On Sunday, they will oversee the inaugural concert for both, launching the chorale’s 32nd season. (Arnold Wayne Jones/Dallas Voice)

David Fisher hadn’t even started his first day on the job as the new executive director of the Turtle Creek Chorale last summer when the word came down: The then-current artistic director, Jonathan Palant, was leaving his post, effective immediately. Forget about setting up pictures of his husband and son on his desk; there would be time for housekeeping later. Right now, they had a bigger priority: Finding someone to lead the 180-member gay men’s chorus.

If ever there was a definition of hitting the ground running, this was surely it.

Arts administration is nothing new Fisher, who for years has worked with Dallas’ Office of Cultural Affairs and founded the Festival ofIndependent Theatres. But managing the chorale was uncharted territory for him. Before he’d even learned the names of all his co-workers, he and the chorale needed to find an interim conductor.

Jacobs had worked in choral music since 1980, although his closest connection to Texas before now was living in Fort Worth for a time in the mid-1980s. Then, while attending a choral convention in San Antonio in 1993, he heard, for the first time, the TCC sing live.

“I was so moved by the beauty of these men’s voices,” he says. “I became a huge fan and started collecting their CDs.”

For the last four years, Jacobs has worked at Eastern Michigan University, but two-plus years of that has mandated a long-distance relationship — his partner had taken a job in Mobile, Ala. — grew too much. In July, “I took a huge leap of faith and resigned” from the university without having a new job in place. Two weeks later, the chorale called. He jumped at the opportunity.

Together, Jacobs and Fisher, along with interim assistant conductor Sean Baugh, formed a quick partnership. Both newcomers in their own way, they have leveraged their skills to manage a smooth transition.

“Trey has such a long history with chorale music, and the chorale fits all of his artistic sensibilities,” Fisher explains, while “I know the

Dallas scene and the community, but little about choral music.” Such symbiosis has helped them go from greenhorns to concert in barely nine weeks. The proof will be the performance this  Sunday of Messiah, the inaugural concert for both at the TCC and the season premiere for the 32-year old chorus.

Although the chorale’s season had already been planned by Palant before his departure, Jacobs says the specific programs had not been laid out. That has allowed him the flexibility to add his own artistic elements and opportunities to express his own ideas.

The cornerstone of the performance, of course, will be selections from Handel’s Messiah, sung in conjunction with other local choruses, but the first act will be a set highlighting favorite numbers from the chorale’s storied repertoire, including “We’re Not Lost, We’re Here” — the first song the chorale ever performed in concert.

The process has been complicated. Jacobs quit his job in Michigan to spend more time with his partner in Alabama. Presently, Jacobs is still living in Mobile, commuting in to Dallas about once a week for rehearsals, while working remotely with Baugh to get the singers prepared. He’s in town more this week leading up to Sunday, and expects he’ll be here almost constantly in December as the holiday concerts approach.

“The [singers] have been incredibly receptive,” Jacobs says, saying his partner has also been unendingly supportive. “I see it in their eyes — they are so excited.”

But while the chorale has an eye toward the future, including a nationwide search for a new permanent artistic director, Fisher and Jacobs stress that for now, Jacobs’ focus is solely on the task.

“One of the stipulations of the contract is not to focus on next season,” Fisher says.

“The interim position was an 11-month contract or until a new artistic director is hired,” Jacobs adds, noting that he has not applied for the permanent post. Instead, he’s concentrating on Sunday’s concert.

“First and foremost I want, from the first night, the audience to be struck thinking, ‘BAM! That’s the Turtle Creek Chorale.’ That sound that is so specific to them, I want recognized from all who attend.”

But there’s another factor everyone who knows the chorale is familiar with, and it’s not about the music per se; it’s about showmanship.

“It’s absolutely crucial,” Jacobs agrees. “I’m stealing this from [former TCC artistic director] Tim Seelig, but what I heard from him is: Every concert should have a gasp, a tear and a chill bump, in whatever capacity. That’s something I’ve always believed in, too.”

When the concert’s over, maybe Fisher will finally take a deep breath and find time to put up those pictures.

This article appeared in the Dallas Voice print edition October 21, 2011.