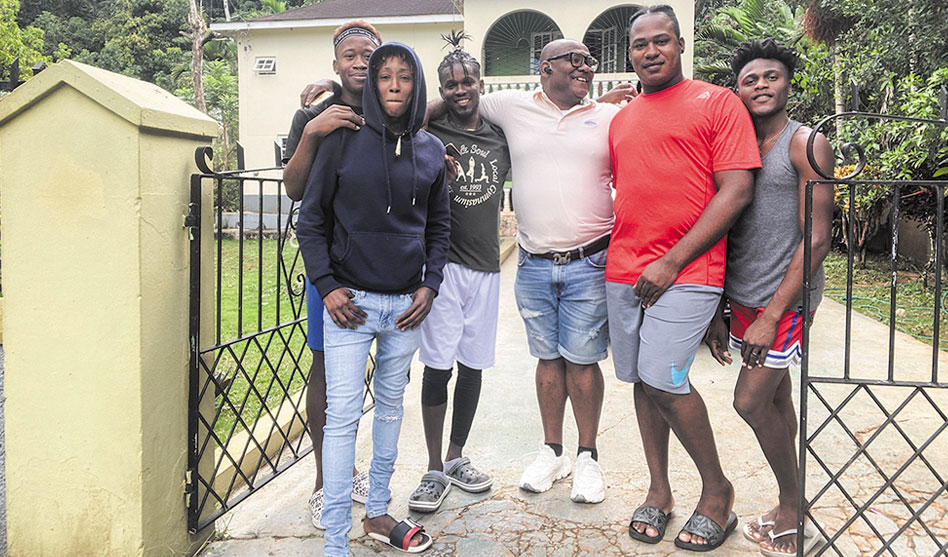 Nevin Powell, center, meets with some residents at a previous safe house location in Jamaica in February.
(Photo courtesy of Jasmyne Cannick)

As a Black lesbian, let me tell you why I travel purposefully to one of the most homophobic countries in the world

Like millions of other Americans, Jamaica is my top destination in the Caribbean. But unlike millions of other Americans, I don’t just come to Jamaica to vacation and soak up the sun. As a Black lesbian, for the past year, I have traveled throughout Jamaica, bearing witness to a modern-day underground railroad while speaking to LGBTQ people about what it’s like living in a country that seemingly encourages their murder.

Beyond Jamaica’s carefully designed and monitored tourism corridor lies a much different Jamaica that is seldom talked about in America: a country filled with people who advocate for and then ignore the murders of lesbian, gay, bisexual and transgender people.

I believe that Americans and our government choose to overlook Jamaica’s state-enabled violence against LGBTQ people because, unlike in Russia and Iran, in Jamaica the only people being harmed are Black, and to acknowledge what’s happening could mean having to vacation in one of the other 12, less popular, countries that make up the Caribbean.

Guess who’s coming to dinner
I am always asked if, as a Black lesbian, I am scared to go to Jamaica. Yes, I am. But not for the reasons most would think.

Away from the beach, outside of the tourist zone, catcalling by men is seemingly expected and accepted as a way of life by women in Jamaica. No one knows that I am a lesbian unless I disclose that information, and I usually don’t. In Jamaica, like in the U.S., people first notice that I am Black and female and — if I open up my mouth and speak — American. 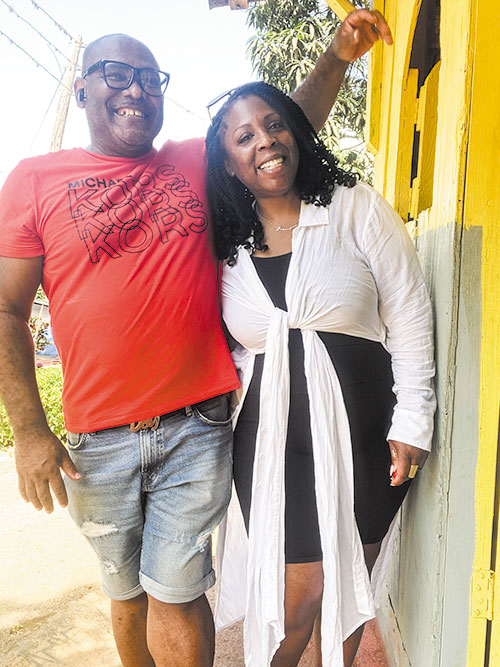 It doesn’t escape me either that I am somewhat more protected being a queer cisgender Black woman. As long as I keep my sexual orientation to myself, no one is the wiser.

What scares me the most are the stories I have been told by women who I have interviewed in Jamaica about being raped and becoming a victim of gender-based violence. A violence that is oftentimes accompanied by gaslighting from the perpetrator, police and even the victim’s own family and community.

So the American in you is probably asking yourself, if it’s that bad, why does she risk her life traveling back and forth to Jamaica?

Murder she wrote
The 2013 murder of Dwayne Jones, a 16-year-old Jamaican boy killed by a violent mob in Montego Bay after he attended a dance party dressed in women’s clothing, changed everything for a friend of mine living in the U.S. but from Jamaica. As a Black gay man, Dwayne Jones’ murder inspired Nevin Powell to leave Los Angeles and move to Florida to be closer to Jamaica.

I watched Nevin start off by feeding homeless queer youth living in the gutters of Kingston, referred to as The Gully Queens, out of his own pocket.

He then rented a house in Jamaica to help hide and shelter queer Jamaicans who had been the victims of physical violence and faced persecution based on their sexual orientation, gender identity and sex characteristics. The safe house has helped over a dozen LGBTQ individuals find safety through emergency relocation and other forms of assistance. Nevin did all of this with the help of a small but dedicated team of folks in the U.S. and Jamaica and mostly out of his own pocket.

I can tell you that Nevin is never more passionate than when he is talking about what is happening to LGBTQ people in Jamaica. He inspired me to go and see for myself. While there, I met with the safe house residents as well as other queer Jamaicans. Hearing their stories and seeing the physical scars of what they survived really put my struggles in America into perspective.

After my first visit, the journalist in me came back to the U.S. resolved to share the work that Nevin was doing and help find more support. I decided to produce a special podcast entitled Ring the Alarm featuring the stories and voices of the men and women I met in Jamaica.

On each subsequent trip to Jamaica, I was introduced to more and more people. Eventually, I had men and women in Jamaica reaching out to me to tell me their stories. Many of those I interviewed have been able to escape Jamaica to seek asylum elsewhere, but most have not. Those waiting on emergency relocation or on their country to change their laws and views on LGBTQ people are subjected to being taunted, threatened, fired from their jobs, thrown out of their homes, beaten, stoned, raped and even killed. 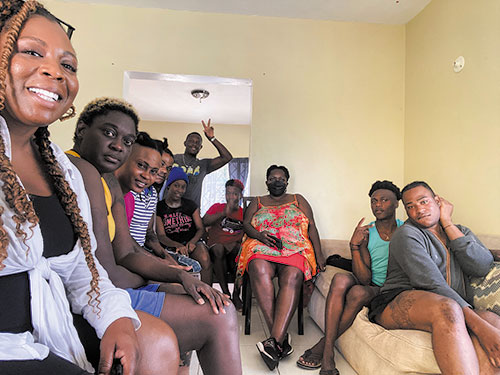 Jasmyne Cannick, left, visits with some residents of a safe house during her August trip to Jamaica. Her best friend, Nana Gyamfi, center wearing mask, is the executive director of the Black Alliance for Just Immigration in the U.S.

So much trouble in the world
Fact: If Jamaica treated the U.S. the way we treat Jamaicans who want to visit here, we’d never be able to vacation in Jamaica. I have watched this modern-day underground railroad up close and personal for the past year.

And while America has rolled out the red carpet to welcome people from some countries, Jamaica isn’t one of them. With its own Wikipedia page dedicated to discussing LGBTQ rights in Jamaica, one could argue that queer Jamaicans seeking asylum in the U.S. could easily prove both credible and reasonable fear for their lives.

Let’s be clear: WNBA player Brittney Griner was not detained in Russia for being a Black lesbian. She was detained for being an American, and she is being used as a pawn. But Griner, unlike queer Jamaicans, at least has the attention of the American government and media, and there are people actively fighting to bring her back home to America.

Sadly, celebrity vacation photos in Jamaica are more likely to trend on social media than the murders of LGBTQ people there.

You may be wondering why I am so focused on Jamaica. Of course, there are human rights abuses against queer people taking place in other countries around the world, but not where over 4 million Americans come to vacay each year. That’s only happening in Jamaica. It’s hypocritical of people from the “land of the free and the home of the brave” to turn a blind eye to what’s happening to LGBTQ people in Jamaica and have the audacity to call out other countries for similar atrocities.

As one of the founders of the National Black Justice Coalition, America’s first Black LGBTQ civil rights organization, and, more recently, someone who helped escort Democratic donor Ed Buck into a prison cell for his role in the deaths of two Black gay men, I have put in work locally and nationally on behalf of Black queer folks.

Last October, I committed myself to spend one year working with LGBTQ people in Jamaica and using my platform to help call attention in the U.S. to what is happening to queer folks there. From my podcast to my support of the safe house, I’m proud to say that I made good on that promise. It was very important to me that, as an American, I didn’t come to Jamaica with the sense of entitlement that Americans are known to bring with them wherever they go.

I came; I listened, and I followed the lead of queer Jamaicans.

When I post on social media about my trips to Jamaica, I get a lot of comments decrying my visits. My favorite comments are the ones from people telling me all about Jamaica’s LGBTQ rights abuses — because, clearly, I don’t know about them. And even though I don’t usually respond to comments, the ones where someone is telling me about how they’re never visiting Jamaica are my favorite. I expect that attitude from white LGBTQ men and women. But when it’s my own people, members of the Black LGBTQ community, I push back on them and challenge them to come to Jamaica and step outside of the tourist zone and meet with their Jamaican counterparts instead of writing the country off as a whole.

Welcome to Jamrock
It is very easy to look at the situation and blame Jamaicans for the discrimination faced by LGBTQ people.
Fact: Jamaica holds the record for the most churches per square mile than any other place in the world.

Jamaica is a former British colony, and, like most of Black Africa, it was heavily influenced by established white conservative Christian churches, particularly the Pentecostalists and Seventh Day Adventists. Where their anti-LGBTQ rhetoric and policies have failed in America, these same churches have succeeded in under-developed Black countries. The country still punishes the “abominable crime of buggery” and acts of “gross indecency” between males with up to 10 years in prison with hard labor.

Similarly, Rastafarism — a religion as homophobic as fundamentalist Christianity that is followed by a large number of Jamaicans, including many reggae artists — believes in a strict interpretation of the Old Testament, at least when it comes to anything queer.

None of this pardons Jamaica today for its egregious human rights abuses and state-enabled murders of LGBTQ people. What it does is put things into perspective and provide context — a context that many white-led queer civil rights groups failed to comprehend when blanketly villainizing Black countries’ treatment of LGBTQ people, which, by the way, usually causes more harm to the queer people living in those countries than actually helping them.

I look at it as the Jamaican version of Post Traumatic Slave Syndrome, and the continuation of the mental slavery of Christianity brought to Jamaica by the British colonizers and continued by white American Christian evangelicals.

Weaponizing religion is not a new concept. So knowing and understanding this, the answer for me was not to boycott or villainize Jamaica but the opposite. I chose to visit Jamaica as much as I could. Doing so has made this past year one of the most fulfilling years of my life. The friendships I’ve made, the stories I’ve shared, the people who have been helped and the support I’ve been able to give to my friend Nevin have made it worth it.

Get up, stand up
My trips to Jamaica are by no means all play. It’s never easy for me to listen to stories of rape, abuse, discrimination and physical violence. I have developed my own self-care routine to help me cope with the triggering effects these interviews have on me.

That said, I look forward to continuing my work in Jamaica and supporting Nevin. Thanks to my podcast, I’ve even heard from queer people in several African countries interested in having me come and amplify their struggle.

So for now, it’s work, save, travel, repeat. My passport will have to be pried from my cold dead hands to get this Black lesbian to stop visiting homophobic Black countries.

Jasmyne Cannick is an award-winning journalist based in Los Angeles. Her Ring the Alarm podcast is available on Apple, Spotify, and Amazon Music. For more information on the podcast and the LGBTQ safe house in Jamaica, please visit iamjasmyne.com/ringthealarm. Follow her travels on Instagram @hellojasmyne and Twitter @jasmyne.