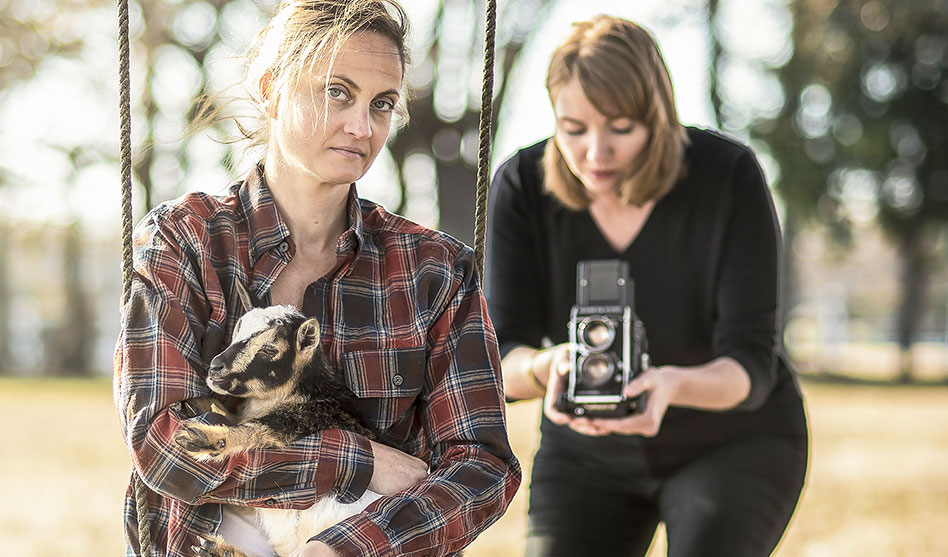 Strange but winning, ‘Alabaster’ wears its heart on its sleeve

June (Kristi Funk Dana) lives in her family’s moldering farmhouse outside Birmingham, Ala., her only companionship from two old goats — one of whom, Weezy (Tina Parker), she can talk to. Into her sheltered world appears Alice (Chase Crossno), a famous celebrity photographer from New York doing a series of “serious” portraits for a planned project: All of her subjects are women covered in scars, including June. Alice, who makes ponderous pronouncements about her artistry being the ability to “capture” the reality of these women past their physical deformities, is unprepared to have her own life similarity examined. June asks her equally invasive questions, but both are masking their own damage — mostly emotional.

Alabaster, a rolling world premiere play by Audrey Cefaly and presented in Dallas by Kitchen Dog Theater, is a strange, romantic and humorous play about serious issues told with a hint of absurdity… or is it magical realism? A talking goat, who offers Yoda-like advice? Meta-foreshadowing that indicates a comprehension of the play as a play… but doesn’t really comment on that? Direct comparisons to The Bridges of Madison County presented unironically? Clear parallels to the play Proof? The secret to understanding Alabaster — and enjoying it as I did — is realizing Cefaly isn’t interested in subtext. Her metaphors are all played at surface-level: If you ever wonder, “Are wounds to the body stand-ins for wounds to the soul?” or “is a talking goat meant to be a pun about Alice acting sheepishly?” or similar academic quandaries, the answer will always be “yes.”

But just because the play is light on literary complexity doesn’t make it any less affecting. June is fully a part of the tradition of angry rural women, perpetually underestimated and pigeonholed but also too afraid to dig themselves out of the hole society has put them in. June’s attacks on Alice are clearly defensive, as is Alice’s big-city cynicism. We can see through them even if they can’t (though Weezy, in homespun pronouncements, clearly can). In some ways, the play reminds me of the terrific podcast Shit Town: a droll gay Southerner’s prickly relationship with a Northeastern intellectual.

Dana’s performance is the cyclone of energy that propels the audience’s interest. Even when she’s unlikeable, she’s fascinating. Parker’s billy-goat-gruffness provides both comic relief, useful exposition and unexpected pathos. The director, Clare Shaffer, paces the dialogue in overlapping layers that demand our ability to cut through the clutter of noise in our lives, and in Alice and June’s. If there aren’t that many surprises, at least they we can hear it all clearly.