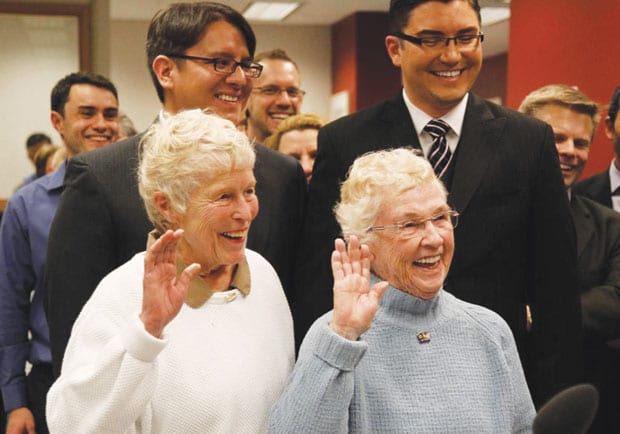 Marriage equality also coming to Maine on Dec. 29 and Maryland on Jan. 1 as LGBT community celebrates fruits of 2012 election 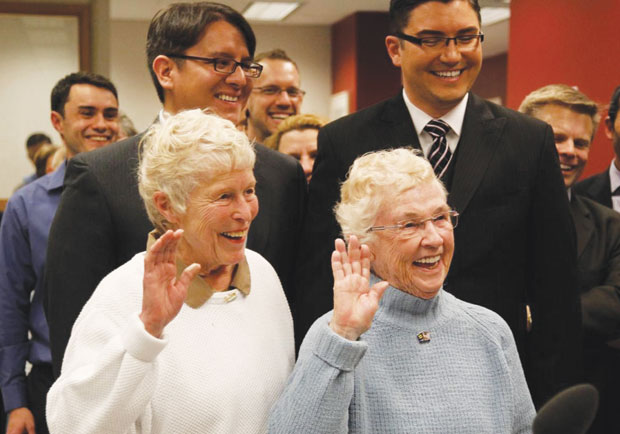 FINALLY FIRST | Jane Abbott Lighty, left, and her partner of 35 years, Pete-e Petersen, raise their right hands as they take an oath while receiving the first marriage license for a same-sex couple in King County Thursday, Dec. 6, in Seattle. (Associated Press)

King County, the state’s biggest county, opened the doors to its auditor’s office in Seattle just after midnight PST to start distributing marriage licenses. But hundreds of people had lined up hours earlier, snaking around the downtown Seattle building on a chilly December night. By 6 a.m., 279 licenses had been issued and the line was gone.

“We knew it was going to happen, but it’s still surreal,” said Amanda Dollente, who along with her partner, Kelly Middleton, began standing in line at 4 p.m. Wednesday.

Washington state now joins several other states that allow gay and lesbian couples to wed. Gregoire and Secretary of State Sam Reed certified the election on Wednesday afternoon, as they were joined by couples who plan to wed and community activists who worked on the campaign supporting gay marriage.

Because the state has a three-day waiting period, the earliest that weddings can take place is Sunday. Same-sex couples who previously were married in another state that allows gay marriage, like Massachusetts, will not have to get remarried in Washington state. Their marriages will be valid here as soon as the law takes effect. 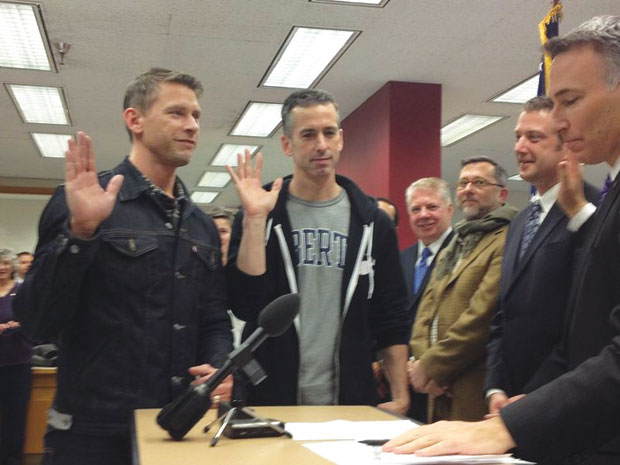 GETTING BETTER  | Among those getting marriage licenses Thursday was activist Dan Savage. ‘It’s been a long fight but it ain’t over,’ he said. ‘We still have to fight [the Defense of Marriage Act] and there’s 41 other states where same-sex couples aren’t allowed to marry.’

Referendum 74 in Washington state had asked voters to either approve or reject the state law legalizing same-sex marriage that legislators passed earlier this year. That law was signed by Gregoire in February but was put on hold pending the outcome of the election. Nearly 54 percent of voters approved the measure.

The law doesn’t require religious organizations or churches to perform marriages, and it doesn’t subject churches to penalties if they don’t marry gay or lesbian couples.

King County, the state’s largest and home to Seattle, and Thurston County, home to the state capital of Olympia, opened at 12:01 a.m. Thursday to start issuing marriage licenses.

Asked whether the middle-of-the-night marriage license roll-out was necessary, King County Executive Dow Constantine said, “People who have been waiting all these years to have their rights recognized should not have to wait one minute longer.”

In Seattle, the mood was festive. Volunteers distributed roses, coffee and fruit. Couples canoodled to keep warm. Champagne was poured. Different groups of men and women serenaded the waiting line, one to the tune of “Going to the Chapel.”

“We waited a long time. We’ve been together 35 years, never thinking we’d get a legal marriage. Now I feel so joyous I can’t hardly stand it,” said 85-year-old Pete-e Petersen, who with her partner, 77-year-old Jane Abbott Lighty, were the first to get a license.

After meeting 35 years ago on a blind date in Sacramento, Lighty and Petersen will get married on Sunday. The couple has been out buying shoes and clothes for their wedding.

Maryland’s law officially takes effect Jan. 1, but couples could start picking up marriage licenses on Dec. 6, as long as the licenses have an effective date of Jan. 1. Whether clerks of court issue a postdated license is up to them, however. They are not required to do so. Maine’s law takes effect on Dec. 29. There’s no waiting period in Maine, and people can start marrying just after midnight.

In addition to private ceremonies that will start taking place across Washington state this weekend, Seattle City Hall will open for several hours on Sunday, and several local judges are donating their time to marry couples. Aaron Pickus, a spokesman for Mayor Mike McGinn, said that more than 140 couples have registered to get married at City Hall, and weddings will begin at 10 a.m.

Washington state has had a domestic partnership law in place since 2007. The initial law granted couples about two dozen rights, including hospital visitation and inheritance rights when there is no will. It was expanded a year later, and then again in 2009, when lawmakers completed the package with the so-called “everything but marriage” law that was ultimately upheld by voters later that year.

This year, lawmakers passed the law allowing gay marriage, and Gregoire signed it in February. Opponents gathered enough signatures for a referendum, putting the law on hold before it could take effect.

There are nearly 10,000 domestic partnership registrations with the secretary of state’s office. Most same-sex domestic partnerships that aren’t ended prior to June 30, 2014, automatically become marriages, unless one of the partners is 62 or older.

That provision was included in the state’s first domestic partnership law of 2007 to help heterosexual seniors who don’t remarry out of fear they could lose certain pension or Social Security benefits.

Among those getting marriage licenses Thursday was gay rights activist Dan Savage, who will marry his partner on Sunday with other couples at Seattle City Hall.

“It’s been a long fight but it ain’t over,” he said. “We still have to fight (the Defense of Marriage Act) and there’s 41 other states where same-sex couples aren’t allowed to marry.”

This article appeared in the Dallas Voice print edition December 7, 2012.