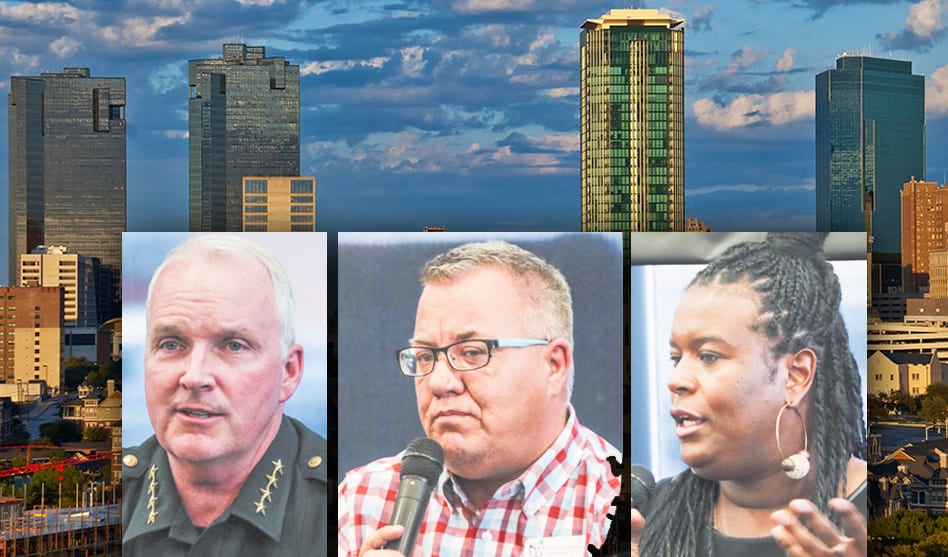 A panel of LGBTQ community members met with Fort Worth Police Chief Edwin Kraus on Monday evening, June 17, for a discussion on how the Fort Worth PD can improve its relationship with transgender residents of the city, and to help allay some of the community’s concerns following the recent spate of murders of black trans women in Dallas. Felipe Gutierrez, director of development and engagement at One Safe Place, coordinated the event at the request of Chief Kraus. One Safe Place is a comprehensive crime prevention agency devoted to preventing crime and violence in Tarrant County’s neighborhoods, schools and homes.

Chief Kraus said he had suggested the meeting because even though there had been no murders of trans women in Fort Worth, given the situation in Dallas, “I figured there were people over here [in Fort Worth] who were scared and hurting.” The response, he said, showed he was right.

Finnigan Jones, executive director of Trans-Cendence, noted that his organization meets on the first and third Tuesday of each month in Fort Worth. On the Tuesday after Dallas police announced that they believed the recent murders there might be connected, Jones said, “about 60 scared people” showed up for the meeting. “We have senior trans women who are afraid to walk their dogs, who are afraid to go to the corner store for some toilet paper.” Those people had questions, he continued; they wanted to know what they have to do to legally carry a gun and where they can learn self defense.

Jones said that trans people, especially transgender women, also have more universal concerns, such as if they are pulled over for a traffic violation, will they be arrested because their presentation doesn’t match their ID cards.

Kraus told Jones that FWPD would gladly work with Trans-Cendence to help people find self-defense classes and classes to become licensed to carry a gun. And he stressed that his department cares about its relationship with the LGBTQ community, noting the large number of officers in the FWPD command that attended the meeting.

Naomi Green, transgender intervention specialist for Abounding Prosperity Inc., said that the transgender community wants to see “action not words” from police. Noting that discrimination often forces trans women “to turn to whatever means they have” to support themselves and their families, she encouraged Chief Kraus and his department to “shift our focus to finding ways” to end discrimination and help transgender women find safer ways to support themselves.

Rafael McDonnell, a Fort Worth resident who works as communications and advocacy manager for Resource Center in Dallas, said that the murders in Dallas have “shown there are some gaps in the way the Dallas Police Department does things, in the way they communicate with the community.” Fort Worth, he commended, “is doing it right. Dallas needs to catch up.”