From the Sisters to Sir 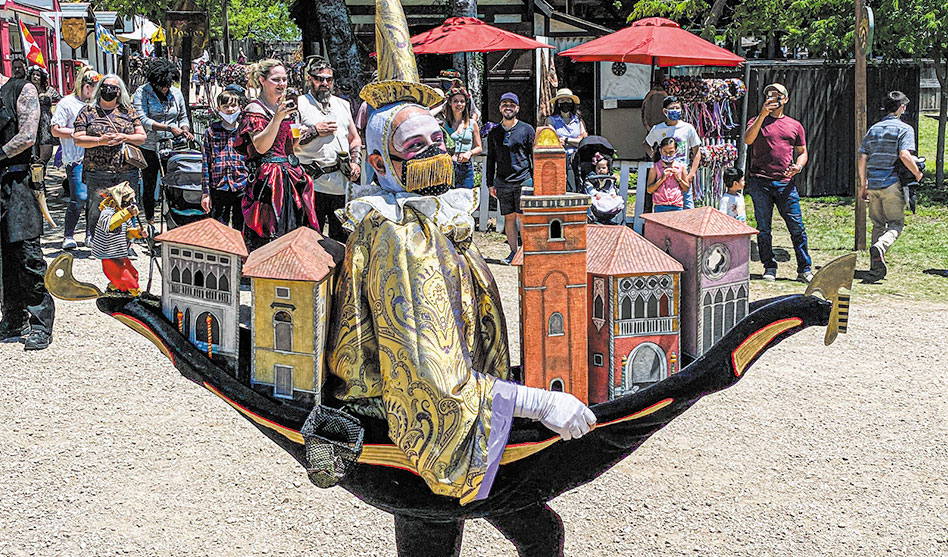 Puppeteer Gabriel Quirk, back on the renaissance festival circuit after a year of plague, talks about his life in the performing arts

For Gabriel Quirk performance art has always been a way of life, from working at a renaissance festival in upstate New York as a teenager, to his days on the streets of San Francisco with the Sisters of Perpetual Indulgence to now, when he is back on the renfaire circuit as Sir Real the Puppet Man. Through the end of May, Quirk will be strolling the lanes of Scarborough Renaissance Festival in Waxahachie, delighting visitors with his imaginative and intricately-detailed puppets — from the “humanette” Baby to his Venetian gondola. This week, he took time to answer a few questions about his life and his art for Dallas Voice.

Dallas Voice: You said you live in Vermont, right? What do you do back in Vermont when you aren’t on the road? Do you have a partner or other family there? Gabriel “Sir Real” Quirk: When the world is not in a pandemic I’m on the road nearly 10 months of the year. I work as an entertainer in renaissance festivals In Florida, Texas, Wisconsin (near Chicago), New York and Maryland. Home is in White River Junction, Vermont, and it’s just as cute as it sounds. There my partner of 20 years waits patiently or comes and visits where I am. I also have a studio there where I build new costumes and puppets and maintain the collection. I’m also the proud donor dad to three wonderful sons who are raised by their moms, one in Vermont and the twins in Boston.

What did you do before Sir Real? And how did Sir Real come to be? Was he birthed from what you did for a living before, or was he birthed from your hobbies and interests? I’ve been performing since I was a child, including at a renaissance faire that started near me when I was a teenager in upstate New York. After high school, I wasted no time and jumped on a Greyhound bus for San Francisco.

My training in theater and puppetry was through a series of individual artists who took me under their wings and also doing Street Theater with the Sisters of Perpetual Indulgence and the Radical Faeries. This was San Francisco in the early ‘80s. 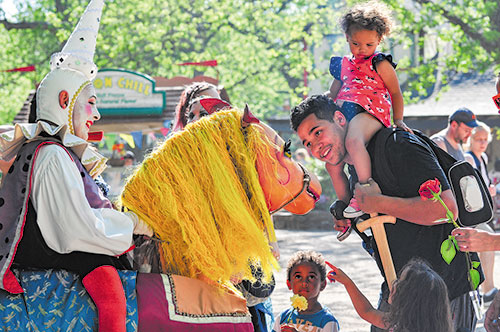 Before Sir Real the Puppet Man, I had another act with my then-drag mother — although that term didn’t exist yet — called The Puppetears of Ecstasy. We were primarily dancers in a form popular then called Contact Improvisation, to which we added insane costume transformations and marionettes. We started performing at some renaissance festivals, and that led us to move to New York, where we performed in East Village clubs and some big AIDS benefits.
We moved to Vermont in 1990 to start an intentional community for radical faeries, and as time marched on, we parted ways, and I re-invented myself as Sir Real, the Puppet man, a solo act. My partner Matt is happy to stay in the back of the house, lol.

How did you learn the art of puppetry? I’ve had a number of teachers over the years, but the thread of my education has always been self-directed. Sesame Street came on the air when I was in kindergarten and I knew right then what I wanted to do.

You make your puppets yourself, right? Where do you get your inspiration? I do make them myself, and I also make puppets and props for other performers sometimes. Inspiration is a mysterious thing. Certainly, experiencing all kinds of art and culture builds a fertile ground in my mind for new ideas to emerge, and there have been so many projects over the years that one idea can lead to the next.

That said, I’ve always been drawn to camp and the absurd. Fellini, John Waters, Commedia dell’Arte and Mardi Gras. Until this last year, I had only missed two Mardi Gras in 40 years.

How long does it take to create/put together one of your larger creations — like the caterpillar or the gondola or the horse? What about the smaller, more “traditional” puppets? Usually, a big costume can come together over a few weeks. But before the actual build happens, it’s rattling around in my head, sometimes for years. A lot of resources and engineering go into a costume.

Also, it’s only practical to bring so many with me on the road. My whole act squeezes into a van and utility trailer. So, a new character has to be really vetted in my mind to replace an older, successful one. Still, it does happen, and I’m excited to bring out new things to share with our audiences that return each year. The Gondola is the most recent costume, and it was actually a test for a bigger project I’m building at another festival, a walk-through attraction called Journey to Venice. It’s an immersive art installation in the form of a carnival sideshow, with peep shows along the Grand Canal and mirror illusions. [EDITOR’S NOTE: Sir Real’s gondola holds a number of Venetian buildings, each with windows that allow the spectator to look inside and scenes set inside.]

Each puppet has its own unique character and special touches, sometimes things that people might not notice at first glance — like the little scenes you see when you look in the buildings of Venice inside the gondola. Why is it worth it to you to take that extra time and effort on those little details? When an artist captures someone’s attention, that’s the beginning of a journey. There has to be somewhere for that journey to go, and further details can offer that path. It’s why characters in a novel or movie have backstories. That’s what makes them interesting and real.

My costumes are more like living sculptures, and while there isn’t a time-based narrative, the slow reveal of detail invites the viewer to stay with me a little longer to see what is there and what will happen. Also, because I’m in the lanes of the faire, people like to watch as new people come upon me, and it starts again. This is especially true with Baby, a “humanette” baby in a stilt high chair.

How much time do you spend on the road each year? About how many different festivals do you participate in? I work in five large festivals a year and a number of small weekend shows, as well as non-renaissance events like the Muses Parade at Mardi Gras and some corporate events. This has me on tour for almost 10 months. During that time, I zoom home for a few days here and there and have a solid home period between November and the middle of January — the best time to be in Vermont, haha. My partner has his own business to manage and is mostly home, but he joins me when he can for a few days. Since I work outdoors, my tour follows the nice weather. So I can lure him away — especially in the winter. 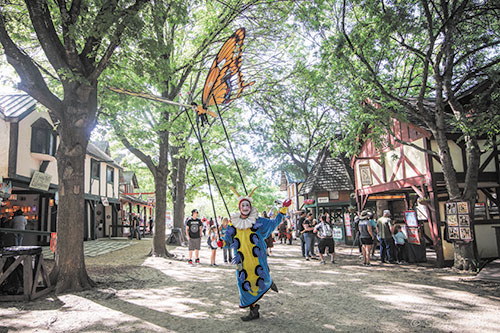 Do you see any distinctive regional differences in renaissance festivals — either the festivals themselves or the people who attend? How is Scarborough Renaissance Festival here in North Texas different from, say, a festival in Wisconsin? Every festival is it’s own village, with its own quality which comes from the people who work there, the people who attend the festival and the character of management, as well as the time of year and prevailing weather. Because of all these factors It’s hard to know what role a region plays in the personality of a festival.

Scarborough Renaissance Festival is celebrating her 40th year, and that makes it one of more established and storied festivals on the circuit. In addition to the North Texas excitement of tornados, a unique feature of Scarborough is that it is so expansive as parkland. Some faires can get uncomfortably crowded, but in this year of social distancing, Scarborough Faire is well suited to accommodate people comfortably so they feel safe being in our world. And people have been so grateful and joyful to be here this year.

As with all the festivals, lots of people come in costume. This year the costumers are making masks appropriate to their look and bringing so much levity and humor to what has been a contentious public debate. We ask everyone to remain masked when not eating or drinking, and most people do. For that we are really grateful.

How difficult was the past year for you with so many of the festivals cancelled or delayed because of the pandemic? From your perspective, how did the pandemic and the resulting shut downs, etc., affect the renfaire community of performers and vendors. Do people seem to be bouncing back? Or have we lost some forever? I was working in a festival near Fort Lauderdale, Fla., when we closed early. I drove home not knowing what would happen next, along with everyone else. There was no work until Scarborough Faire [this year].

As an “independent contractor,” I qualified for unemployment under the Pandemic Unemployment Act, and that saved me. It allowed me to be home for a whole year, which had not happened in my adult life.

I worked on new projects, cooked a lot and renewed my relationship with my partner. I feel really blessed. Some people did take this opportunity to begin a new chapter in their lives or chose to continue to stay home for now. We all had to make our choices to return and when. The good news is that people are coming to the festival, wearing their masks, mostly, and they are shopping with our artisans. We feel like a new wave of audience is discovering the renaissance faire, and they are loving it.

Historically, after the plagues of the Middle Ages came the renaissance. So I guess it stands to reason. Also, it’s been building for a few years but our audience has also become quite diverse. You might think that a historical festival based on the English Renaissance might attract a “certain” crowd. But the festival community is so welcoming, and the costume element is so playful, that more people of all ethnicities feel welcome and have a great time. The people watching is unmatched.

This is also true for the LGBTQ community. It’s kind of unusual, especially in this part of the world, to mix gender non-conforming kids wearing unicorn horns and purple hair with families pushing strollers or sexy fur clad barbarians at the joust next to a bunch of cowboys and bikers, and girls walking holding hands and some bears in kilts. We see it every day and I love it.

In our magic little world, people can get re-acquainted with each other and their shared humanity. It gives me hope for the world.