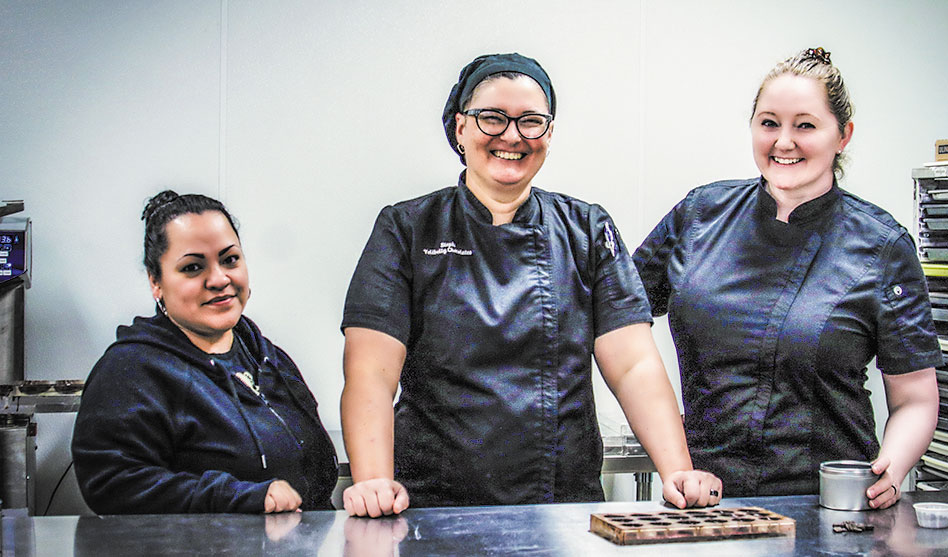 “This is my 12-year-old self’s dream job come true,” Stephanie Peacock declared with a grin, indicating with a wide sweep of her arm the kitchen of Yelibelly Chocolates’ new location in Addison. And it’s hard sometimes, she admitted, not letting that inner 12-year-old take control and plunge her face into the batch of melted chocolate just waiting to be turned into a delicious Yelibelly treat.

But at the same time, being kitchen manager for the growing chocolate company is serious business. And Stephanie’s serious adult side is there to take care of business. 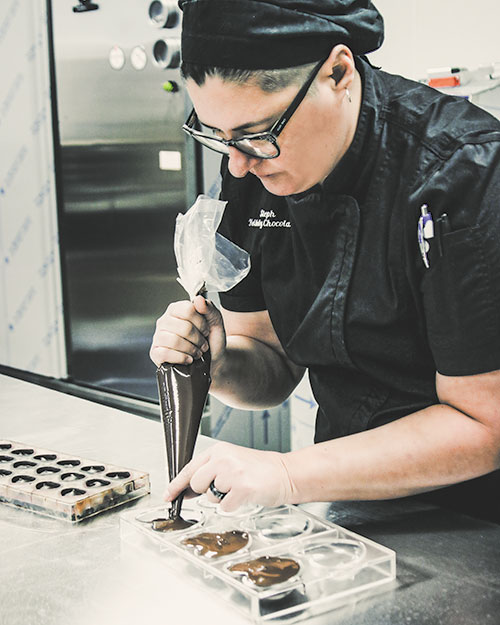 Stephanie was raised in Houston, the daughter of a doctor and a nurse. She said she spent her childhood an

d teen years struggling with an undiagnosed learning disorder. And by the time it was finally diagnosed in college, she had decided to leave school and go to work.

Stephanie spent 15 years as sales and marketing manager for a manufacturer in the natural products industry. When she met her future wife and moved to North Texas about 12 years ago, she began working in retail sales for The Vitamin Shoppe chain.

Then about two years ago, when she was starting to feel “pretty burned out” by the retail side of the nutrition industry, Stephanie had the chance to start working part-time for Yeli Marshall and her burgeoning chocolate business.

“I started out part-time, working events and then doing a little of the kitchen work,” Stephanie said. But as the business grew, so did Yeli’s need for a full-time employee, and Stephanie was happy to step into that role.

Moving to North Texas
Stephanie was living in Houston, at the end of a failing relationship, when her friend Angela invited her to go to a belly dance show. One of the featured dancers was a woman from the DFW area named Tracey, who used the stage name Obsidia.

“The minute I saw her, I knew,” Stephanie recalled. “It was just one of those ‘hammer over the head’ moments” — and it’s a moment that has lasted some 12 years now.

The two met after the show that night, but because of circumstances — Stephanie had not officially ended her relationship and Tracey lived in DFW — the two did not talk again for several months.

That show was in July. By October, Stephanie’s relationship had ended, and she was renting a room from her friend Angela. “Then one night, Angela comes in and says, ‘Tracey’s coming to town. Do you want to have dinner with her?’ I immediately said yes,” Stephanie said.

After that dinner, Stephanie and Tracey stayed in touch, talking online and taking turns making weekend visits. One of the things she liked most about Tracey, Stephanie said, was how up front and matter-of-fact about what she wanted and what she didn’t want.

“She told me first thing, ‘I don’t play games, and my son comes first,’” Stephanie said.

“We did the long-distance thing for about a year, and then I moved to DFW,” Stephanie said. Now, they have been a couple for more than 12 years, and they have been legally married since the summer of 2015 when the U.S. Supreme Court issued its ruling on marriage equality.

Stephanie said she and Tracey moved slowly when it came to introducing Stephanie to Tracey’s son, Kendal. But like Stephanie, Kendal deals with his own learning disorder, and the two of them quickly began to connect with each other.

“We realized that we both like Star Wars and math, and we just hit it off,” Stephanie said. “We would talk over Skype, and I helped him with his homework.” 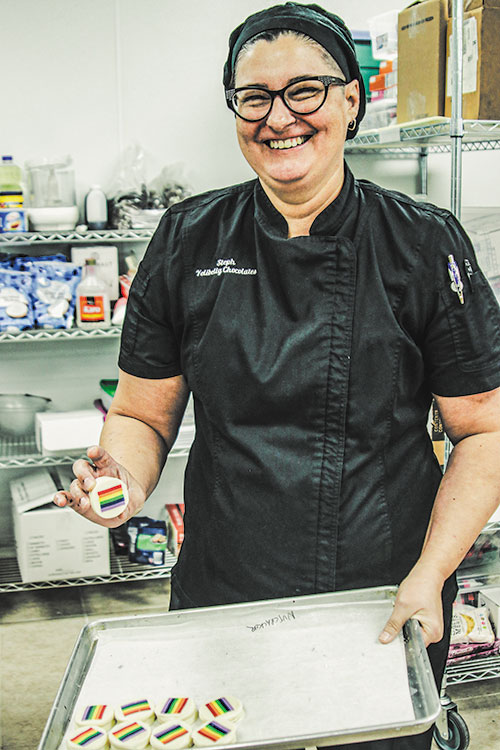 Once Stephanie moved to DFW with Tracey and Kendal, she said she and Tracey went to Kendal’s elementary school — they live in the HEB Mid-Cities area and Kendal attended HEB school district schools — to speak to the administrators, counselors and his teachers and make sure they understood their family dynamics.

“The HEB Independent School District has been wonderful to us as the same-sex parents of a special needs student,” Stephanie said.

When Kendal joined the high school band and then drum corps, it gave him and Stephanie yet another connection. “I was a band kid, too!” she noted, adding that she and Tracey often volunteered to help with band and drum corps events and trips — and still do so now, even though their son has graduated from high school.”

With Kendal out of high school and enrolled in college now, and with Tracey having recently finished her master’s degree, Stephanie said she had contemplated returning to college herself to finish her degree in food science. “But,” she added, “with my dyslexia and the differences in the way I process information, school can be a real challenge for me. So I decided not to do that now.

“I may go back later, but my learning style is a lot more conducive to what I am doing now here at Yelibelly,” she added. “Besides, I love being part of growing a business!”

Making her way to Yelibelly
During her years in the natural foods industry, Stephanie said she often found herself in group chats online “trying to dispel misinformation” and “trying to talk people out of buying things that were supposed to be good for them just because [the product] was ‘natural.’ “Natural’ does not necessarily mean ‘healthy.’”

On occasion in those online groups, Stephanie said she would come across Yeli Marshall, a registered dietitian with a master’s degree in nutrition and food science, who preached the same message about learning the difference between “natural” and “healthy.”

Eventually, Stephanie said, she started running into Yeli at events around the area — and not just those related to nutrition and food science. As it turns out, Yeli is also a belly dancer like Tracey (well, not actually “like” Tracey; the two women have very different styles of dancing).

At first, Stephanie was a part-time employee for Yelibelly Chocolates, helping out at pop-up shops and special events where she would serve chocolate treats and make ice cream with liquid nitrogen — another Yelibelly specialty.
But as Stephanie’s retail burnout grew and Tracey was finishing up her master’s degree, Yelibelly was also growing by leaps and bounds. So when Yeli offered her the chance to come on full time as kitchen manager and lead chocolatier, Stephanie jumped at the opportunity. And now, even though going to work means making the trip from Bedford to Addison and back, Stephanie said her job is “an absolute joy! I get up in the morning feeling great because I know that I’m going to go to work and I’m going to make chocolate or ice cream!”

Dream job
Yelibelly Chocolates is “an award-winning, artisan chocolate company” that has “been making amazing, flavor-infused truffles since 2009,” according to the company’s website. Each and every one of Yelibelly’s “chocolates and flavor-infused ganaches are hand-crafted in small batches using natural ingredients. No preservatives are used in our ethically-sourced chocolate. We use real cream and butter in each batch of ganache, and you will be able to taste the difference,” the website notes. “We work hard to develop new flavors all the time. Check back regularly for new inspirations, from beer-infused truffles at St. Patrick’s Day to floral flavors leading up to Valentine’s Day, and maybe even something hot and spicy for the summer!”

The company also specializes in custom-decorated chocolate treats for special events like weddings and other parties as well as branded items bearing company logos or other custom graphic designs.

Yelibelly is especially known for its chocolate covered Oreo-style cookies, and Yeli herself recently auditioned for a chance to pitch her Cocoacinos — a patented treat consisting on a thin disk of gluten-free, vegan and keto-friendly chocolate made from “fair trade and sustainably sourced chocolate,” made to float on top of a cup of coffee, infusing each sip with just the right amount of delicious chocolatey sweetness. The Cocoacinos, like Yelibelly’s other confections, can also be decorated with company logos and other custom designs.

Oh, but there’s more — so much, much more. The company’s slogan is “Let’s get chocolate wasted,” and they give you plenty of options to do just that.

If you are looking for a way to “elevate” your next event, Yeli and Stephanie say call them up. Take your coffee bar to the next level with Cocoacinos, and up the “taste” factor at your next party with a truffle rolling desert bar or a liquid nitrogen ice cream station.

Yelibelly also offers chocolate demos and sampling events, with Yeli leading participants in sampling different kinds of chocolate to develop their palate and learn to differentiate in chocolate made from cacao grown in different parts of the world.

“If someone tells me they don’t like dark chocolate, I know they just haven’t eaten enough dark chocolate,” Stephanie declared. “We can give you three separate chocolate bars with each one being 70 percent dark chocolate.

You can taste each of them, and you’ll see that every one of them has a completely different flavor profile. Cacao from Madagascar, for instance, has some distinct notes of vanilla, where chocolate made from cacao grown near tobacco fields will have an earthier flavor.”

Being part of a company that pays so much attention to quality and creates “such fantastic products makes it a real joy to come to work every day,” Stephanie said. “And working for Yeli, who is such a fantastic ally [to the LGBTQ community], first and foremost, and just an all-around great person, makes it even better.

“I have a job that makes me happy and makes other people happy. I mean, nobody is sad when you hand them good chocolate or ice cream!” Stephanie added. “What else could I ask for? It’s a lot more fun that working retail, for sure!”

Yelibelly Chocolates is now open in its new location at 4500 Ratliff Lane, #102 in Addison. You can also learn more about the company, plan an event and order chocolates online at Yelibelly.com. Contact them by email at hello@yelibelly.com or by phone at 817-789-5563. 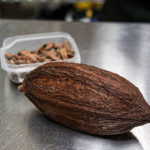 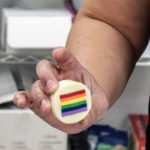 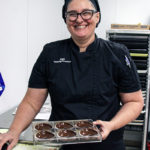 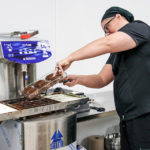 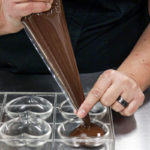 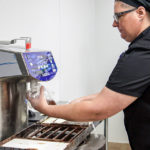 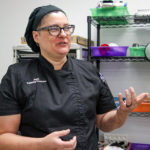 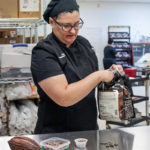