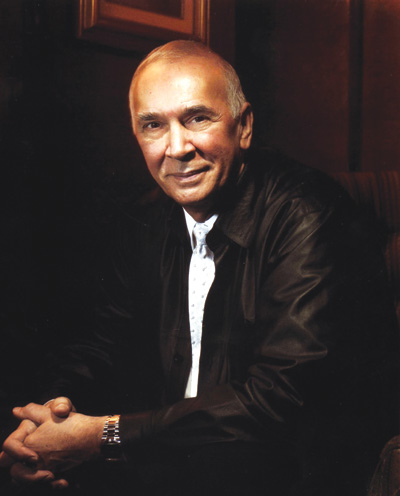 FAME MONSTER | Frank Langella isn’t the subject of his own memoir — his acquaintances are.

Admit it: You’re kind of klutzy sometimes. And clumsy. That’s you, as pillows are tossed, furniture bumped, frames go askew, nerves are shattered and so is glassware. You’re Molly McMessy, as knees are skinned, bruises erupt, and moods drop, busted next to belongings on the sidewalk. Ooops. Butterfingers.

But dropping things isn’t always bad; just ask actor and now author Frank Langella. In his new book Dropped Names, he lets go of a few tales and things as he writes about the stars he knew, hated and loved.

It all started with one word from Marilyn Monroe.

Langella was a 15-year-old New Jersey boy on a bus trip to New York when a limousine happened to pull up in front of him while he stood in Times Square. The driver pushed Langella aside and when the limo door opened, a vision in white emerged. Monroe smiled and said “Hi,” and Langella was instantly smitten.

He never forgot that whispered word, even as his long career in Hollywood and on Broadway allowed him to meet all kinds of famous characters.

Because he was friends with their daughter, for instance, Langella spent long summers at the various homes of Paul and Bunny Mellon, and their luncheons were filled with the rich and famous.

Langella remembers how everyone was greatly entertained by gay wit Noel Coward, and how Jackie Kennedy was rarely far away. 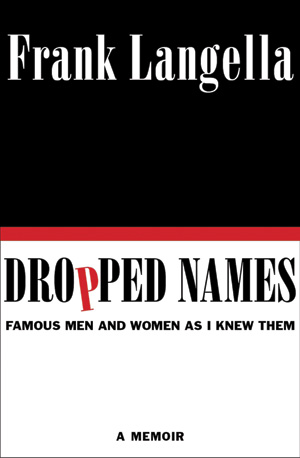 While playing in the Poconos, Langella had the pleasure to work with Billie Burke, far from her Glenda the Good Witch role but not a bit less than charming.

He writes of Rita Hayworth’s illness, when nobody knew much about Alzheimer’s. He tells of a “stupid thing” he did to Jackie O. He writes of a down-and-out Montgomery Clift, calls Richard Burton a “crashing bore,” feuds with Lee Strasberg, shares bawdy jokes with Elizabeth Taylor, pranks with Robert Mitchum, and ….

So, unfortunately, is this book.

Dropped Names is one of those Hollywood tell-(almost)-alls that you never want to end. It’s like discovering a box of old movie magazines in grandma’s attic, or like a movie-marathon on paper. It’s the best kind of fluff, especially if you’re a film buff and celebrity follower.

Readers will be happy to know that there’s enough snark in Langella’s prose to satisfy the fiercest gossip lovers, but Langella also writes poignantly about Hollywood’s tortured souls and those who seemed too fragile for fame. What’s nice is that he does this while calling only the barest amount of attention to himself. He tells the stories as he remembers them, without letting himself get in the way.

If you love old movies, or if you miss the glamour and glitz of old Hollywood, then grab the popcorn and settle in. For a fan like you, Dropped Names is a book you won’t want to let go of.

This article appeared in the Dallas Voice print edition August 24, 2012.