FILM REVIEW: Back in theater for ‘Tenet’ … was it worth the wait? 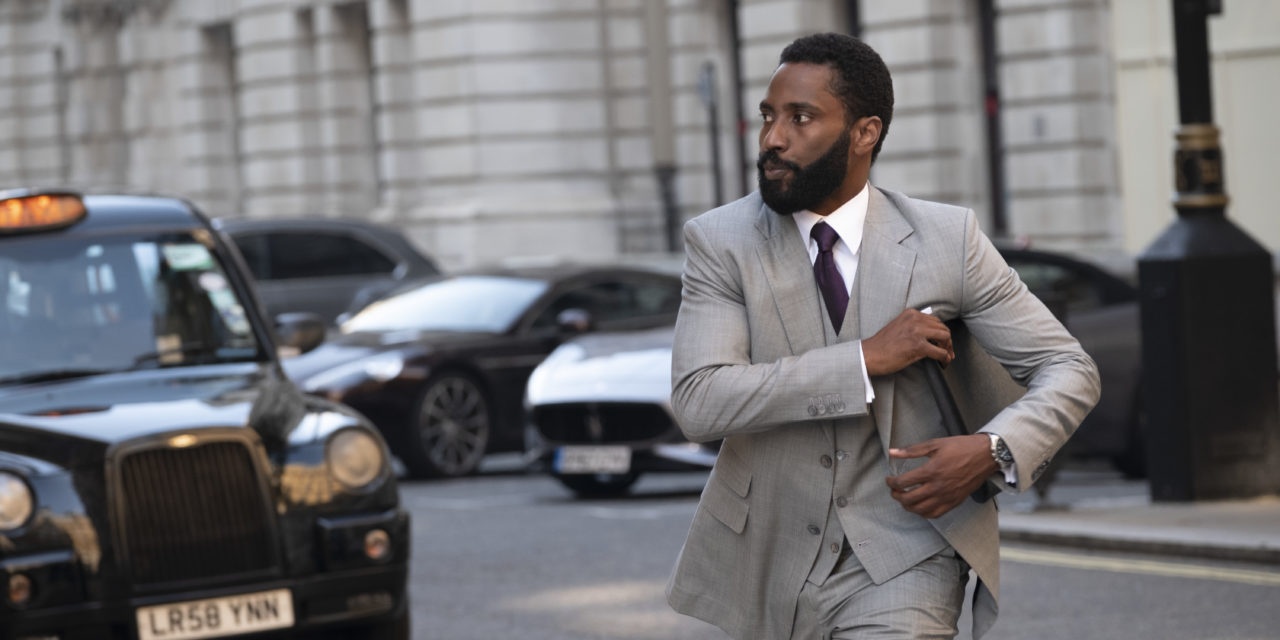 On a scale of Christopher Nolans, Tenet, Christopher Nolan’s latest film, is his Christopher Nolaniest yet. That’s not especially a compliment. Nolan certainly has a grand style and deals with ideas more than any other director of Hollywood blockbusters. But calling his films “pure cinema” is often a cop-out for those ideas and the vainglorious execution of them taking precedence over logic and clarity…. not that clarity is the be-all/end-all of moviemaking, but c’mon! Little help, please?

In many ways, Tenet is his most aggressively experimental film. The main character, played by John David Washington, is never given a name, but referred to only as The Protagonist, an obnoxious conceit that puts it in the same category as avant garde art plays by Pinter or Ionesco or Fo. It might make sense if the film was aiming for humor or symbolism, but as far as I could make out, the point was mostly to just be nifty and weird. Meh.

We begin our long slog of 150 minutes with an eight-minute introductory scene that doesn’t explain much but is whiz-bang cool: Commandos raid an opera house. One CIA operative (Washington) seemingly rescues an item but is caught and tortured until he takes a suicide pill. But he hasn’t actually died (probably) — it was a test of his devotion to the cause. He is tasked by his handler with a mission: Find out how artifacts, mostly ordnance, from the future are manifesting in the present, giving off a radiation that renders traditional cause and effect backwards (what the film calls “inversion”). This takes him on a series of Mission: Impossiblish escapades where he begins to uncover the time-plot of an evil Russian arms dealer (Kenneth Branagh).

It doesn’t really matter what the rest of the plot is; I’m not sure I could tell you. Suffice it to say it veers dangerously close to the gathering of infinity stones and the snapping of fingers to alter the makeup of the universe. I am not kidding about this. The items he is trying to keep from the hands of the villain are pure McGuffins: We never see them clearly, though we come to learn they are collectively called “the algorithm,” which is confusing enough in itself. Forget all that. 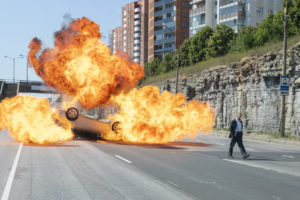 The real appeal of Tenet is not in piecing together Nolan’s labyrinthine plot, but luxuriating (and you can do that) in the action set pieces. Oddly, my favorite one has nothing of special effects about it: The Protagonist brilliantly dispatching half-a-dozen henchmen in a kitchen with superior fighting skills. Is that taekwondo? Krav maga? Well, we never find out, because he never really puts it to use again. It’s just one of many rabbit trails we go down that never seem to lead anywhere. Take, for instance, the opening scene: It seems destined to come back later in the film (Tenet often revisits past events; ugh, the torture of time travel movies) but it never does.

The machine that causes time travel leads to some interesting fight scenes, that are more complicated than merely playing in reverse — one character is usually moving forward in time, the other backwards. (Again, don’t ask; I can’t explain it.) Technically, it’s a total hoot. But it also drains you emotionally, like being exposed to strobe lights. It doesn’t help that the sound exacerbates the problems, from Nolan’s notoriously under-mixed dialogue (also a problem for me in Interstellar and Dunkirk) and Ludwig Goransson’s numbing, pulsating, depressive music score. The film beats you down.

There are some bright spots in the performances. Robert Pattinson, as Felix Leiter to Washington’s 007, gives a lovely, mature and unaffected performance with his natural accent; it’s really a character part. And I can’t stress enough the delight in seeing Washington — who was positively magnetic in BlackKklansman —tie the movie together with his charisma and ease. And let’s not downplay the relevance of a Black leading man action hero in a non-genre film playing a smart and sophisticated spy. (Nolan seems to be challenging Eon Productions with hiring Idris Elba as the next James Bond, or being left on the sidelines.) I stayed through the end, even though I did not walk away satisfied.

There are hints that The Protagonist actually did die in the opening scene — that the suicide capsule had its intended effect. (The capsule reappears randomly near the end, for no apparent reason other than to place a worm in our ears.) If that’s the case, the nonsense of the plot (for instance, once we learn a fact about the villain, his wife’s efforts to escape his clutches make no sense) can be brushed off as the illogic of a dream. Maybe so. But until that is confirmed, all I can say is: It was good to be back in the theater. Now let’s make it worth the wait.