EXCLUSIVE: Inside the shocking comic moment in DTC’s “God of Carnage” 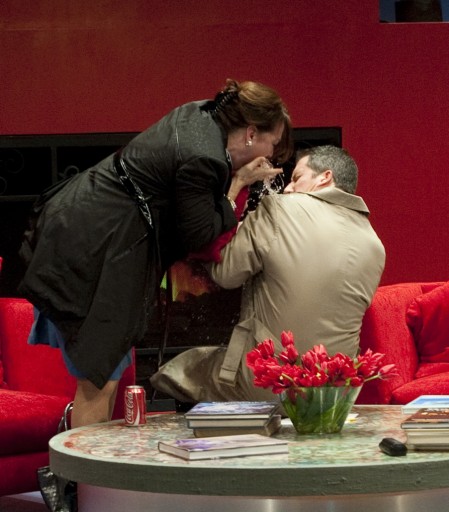 Ask anyone who has seen Dallas Theater Center’s production of God of Carnage what the most memorable moment in the play is, and you will get a chorus of unanimity — guaranteed. If you’ve seen it, you know. If you haven’t, spoiler alert!

It comes about 20 minutes in. A graceful socialite, played by Sally Nystuen Vahle, announces she’s feeling queasy. Then, with almost no warning, she blows chunks. Throws up. As in projectile vomiting that seems to go on forever. And is milky. And has big pieces in it (apples and pears, if you follow the dialogue). And it gets everywhere.

The process of making the scene work was a confluence of Vahle’s stagecraft and the efforts of John Clauson, the props designer, and his team. And it took a lot of trial-and-error.

“There are no indications in the script on how to do it,” Clauson says. When he found out the responsibility for making the vomit work fell on his shoulders, he immediately did what anyone would do: He went to YouTube.

“Oddly enough, I found many, many versions of the scene,” he says, “not of how to do the trick, but just videos of productions.”

He quickly decided there were two basic versions of the effect: Complicated (usually involving a five gallon tank of “vomit” offstage and a series of pumps and tubes connecting to the actress) and simple (a mechanism onstage that the actress can manipulate). “I’ve learned after years of this, complicated is almost never the way to go,” Clauson says. “Anyway, the [five gallon method] looks ridiculous when you see that crazy fountain shooting out of the person’s arm. We modified the idea pretty considerably to hide it in a pillow.”

“They tried several versions of the mechanism,” Vahle says.

Originally, they wanted to use a hot water bottle; that didn’t work. They ended up with a water-skin. “We did a lot of testing — 30 or 40 hours trying different combinations of things,” Clauson says.

Onstage, the mechanism is hidden inside a beautiful pillow that seamlessly integrates into the decors of the set. The cork that covers the nozzle is fitting with the same fabric so only on close inspection can you tell it’s not a real pillow.

That was step one. Then came the, umm, contents.

“They went through a couple of trials to find the best consistency of the vomit — what made the most projectile look,” says Vahle.

“They used split pea soup on Broadway, but I knew we wouldn’t do that, because that’s disgusting,” Clauson says. “My first tests were designed just around water. I wanted to get the consistency as thin as I could so we didn’t have to have a huge hole in the pillow.”

The final formula was a mix of water, cornstarch, some detergent and bits of white and yellow sponges to give them vomit… er… “heft.”

Some people who have seen the play from the front rows swear that Vahle really is vomiting, and that they can smell it. Not so, though people have said that to her. Well, there was one time…

“During the first Sunday matinee of preview week, it smelled exactly like vomit. I thought, Did I actually throw up? The cornstarch had gone bad and had actually turned rancid. We had to come back to do the night show knowing it was bad.” (Clauson scoffs at the word “rancid,” but says it did smell “like cornflakes that have sat out too long.”)

“It’s totally psychosomatic,” he says. “They smell it because they think it should smell.”

The final step in creating the illusion fell largely on Vahle: Selling the scene.

“We played around a bit in rehearsal,” she says.” It took a few tries to figure of the best angle and how much should we fill it.”

“Depending on how Sally’s aim is, the first row can get messy,” Clauson concedes. “When we were in tech rehearsal, I sat in the first row to see whether the audience was getting splattered. [Director Joel Ferrell told me to] make the rig so it shoots into the second row, and they’ll put it back. If she aims up and squeezes with all her might, she can hit at least the first row.”

Timing is essential in the scene. Ferrell blocked the scene so that no one accidentally sits on the pillow, though it would take more than bumping it to get the vomit flying. Instead, the hard part is preparing the pillow mechanism in plain sight without the audience seeing it.

“There’s a certain point where I have to work the nozzle that covers it up,” she says. “Last night it was really full and I felt it start to burble up. Every once in a while it has gotten clogged and hasn’t timed out the way I thought it would. I don’t want to look like I’m milking a pillow with my elbow, but I have to sell that heaving of vomit.”

“Sally does an amazing job,” Clauson says. It helps being a Method actor.

“Sometimes the vomit will actually get in my mouth,” Vahle says. “I like that — it makes it more real.”

God of Carnage runs at the Kalita Humphreys Theater tonight through Sunday.