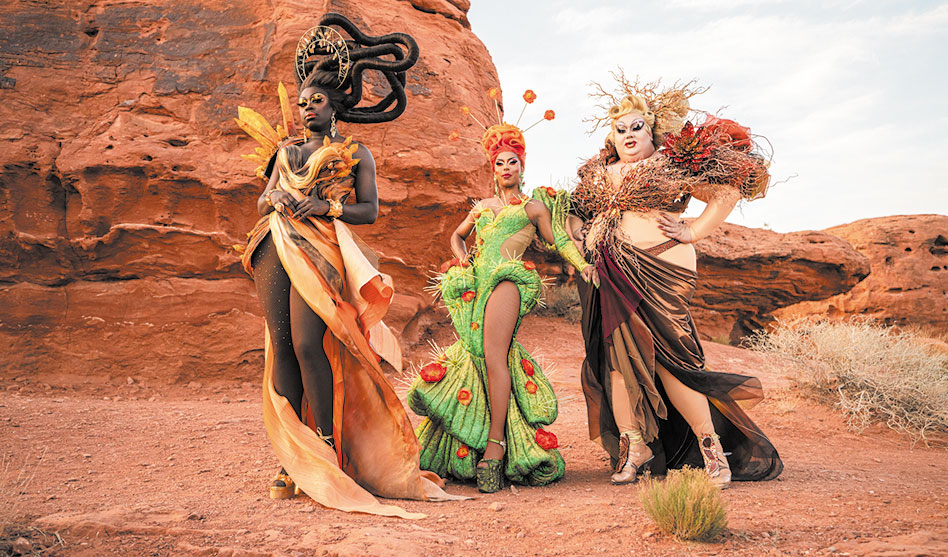 Bob the Drag Queen, Shangela and Eureka fight for equality through drag.

Bob and Eureka: There might be a better way, but this is the queerest way

Glitz, glam and, oh, just the small matter of changing hearts and minds. That’s a tall order for anyone, and the basic setup of every episode of the HBO show We’re Here. But of course, once again in Season 3, drag queens Shangela, Eureka O’Hara and Bob the Drag Queen use their skills to deliver on that recipe and then some.

On the surface, We’re Here is a show about drag queens teaching their craft to queer and allied people in small, conservative towns across middle America.

However, look past all of the costumes, makeup and dance numbers, and it becomes clear there’s a deeper message of acceptance running through each episode.

Bob the Drag Queen and Eureka O’Hara, two-thirds of the iconic drag trio, joined me for an interview about the show’s latest season. They discussed the importance of giving patience to those who want to listen, how spirituality and queerness can intersect, the political environment during each season, and much more.

EVE KUCHARSK: Every time you head into a new town there is a bit of resistance, but I felt like this season it was especially bad. There were hostile threats on social media, and then there was the Utah council that was working to cancel your filming permit. Did you feel that way? Bob the Drag Queen: We’ve had resistance before. I mean, we even had the cops called on us in Season One. Several times, actually [laughs]. And having a whole town try to shut us down, I don’t know if that’s a reflection of where we are now or if it’s a reflection of where we were at the time, physically. But the political climate has changed. Each season has been a different world. Season One was pre-pandemic; Trump was still president. Season Two was a very tumultuous election year. And now, [with] Season Three, we were ramping up to midterms, we had a new president and we were getting back out into the world in terms of coming out of lockdown. 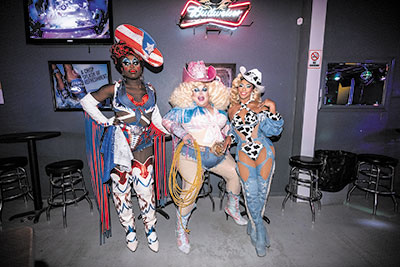 Eureka: That’s true. It’s wild. It’s just people being misinformed and not understanding. Misunderstanding is one of the biggest causes of discrimination. Honestly? I find most of the time that the people that fight against our show the most have not seen an episode of our show. They’ve just heard rumors, or they see drag and automatically make assumptions. There’s no facts behind their fear tactics; it’s all assumptions. I would love to test these people and say, “Why don’t you watch an episode and see what we’re showcasing before you combat us?”

Eureka, at the Fourth of July parade in Granbury, Texas, there was a man holding up a sign with anti-LGBTQ scripture, and he said, “I just want to show that there’s two sides of the story here,” and you were clear that queer people see his message every day. Eureka: Yeah, I’m like, in your home, you say these things every day. The people that you live with already know you feel this way. People in your world know this is how you’re feeling. It just frustrates me, because I’m like, “No, you want to create this circle of innocence around what you’re doing.” And you want to be like, “Oh, I’m just doing this because of the grace of God.” Well, I also do everything in my life, as a Christian person, as a spiritual person, by the grace of God as well — she’s a Goddess. She’s the God that I believe in, and I was raised Southern Baptist Christian, and I still believe very heavily in that faith. And how dare you tear me down for how I decide to live and for how I decide to praise? It just goes against everything you say you believe in.

Bob: And as someone who is absolutely not religious in any regard, I want you to know that if you’re reading this, you do not have to justify your life based on anyone’s religion.

Eureka: Work! And the reason that I, as a spiritual person, am on Bob’s side when he says something like that is because that’s the truest and most honest way of thinking: allowing people to have their own free will. I’m not God. I don’t get to play that part. I don’t get to judge and pick and choose.

That’s an interesting point, and at least those people actually stopped to try and listen to you, Eureka. Bob, you were just trying to cross the street in one of the episodes, I think you were looking for ice cream and this guy just started shouting at you. Bob: Yeah, and that’s when I realized that guy didn’t actually want to talk. It wasn’t about God. It was about him. It was about his ego. And even if it was about God, I don’t believe in that, so why do I care? You can’t come at me with your religion, telling me that I need to live my life by some rules that you don’t even know what they are. You and your own parishioners can’t agree, and now you want me, someone who doesn’t even believe in it, to go by a set of rules that y’all motherfuckers can’t come up with? [Laughs.] I don’t have as much grace for religious bigots as Shangela and Eureka do. I have actually no grace for religious bigots. None whatsoever. I want to say, “Fuck you, don’t tell me who to believe in. Mind your fucking business,” but I didn’t say that on television.

This show got me thinking about the social pressures that exist in small-town communities and the niceness to your face but the lack of overall kindness to those who are outside the status quo. Do you think that’s why even large and vibrant queer communities are forced to be silent even within their own spaces? Bob: I always ask myself, “Do you want to be a nice person, or do you want to be a good person?” And every good person isn’t nice, and every nice person isn’t good. You know what I mean? I think that a lot of times, people do feel completely silenced in these communities, especially because it’s even harder to combat hate when it’s thinly veiled as love. Because people say, “Well, we just want to protest because we love you and we don’t want your soul to go to hell.” And then you think to yourself, “Wait. Is it really because they love me? Are they really here just to save my soul?” And then you have to take a step back and you go, “No, no, no. That’s none of their business.”

Was there something positive about meeting these lovely queer and allied people that you were surprised by this season? Bob: There’s always something surprising to me. I’m always shocked and gagged when I see the amazing things that our drag kids can do. You know, everyone is remarkable at something. And sometimes we get to see that not just on stage but in their communities, and in how their fellow townspeople see and revere them. I got to see it with my drag kid, Micah, in St. George, Utah, where the community was just like in awe of how remarkable of a person they were.

Eureka: We got a chance to work with some really interesting youths, the people that are the new generation. Especially this season, I had an experience with several young people who are a part of the generation that’s coming behind us that wants to create change and they want to promote progression and equity. It just gives me so much hope in the world.

It’s really hard to go into communities that don’t accept you even when you’re trying to spread love? Bob, you said that it’s not really about the drag, but it’s about giving voice to these queer people. Is that what motivates you both to come back to We’re Here season after season? Bob: Let me be very clear — I sound like Obama, “Let me be clear.” There has got to be an easier, softer way than rolling into a town with a bunch of drag queens [laughs], putting on a show, making costumes, blood, sweat and tears. This is not the easiest way to be doing what we’re doing. I don’t even believe that it’s necessary that it has to be this. It doesn’t have to be this, it could be something else. But this is what we do. This is what me, Eureka, and Shangela do and happen to be very, very good at. I don’t want to be egotistical and say, “It has to be this, and it has to be us,” because there’s a lot of people doing a lot of stuff. But I know that what we’re doing is effective. People tell me all the time, “I watched the show with my mom, and my mom used to be extremely homophobic, extremely transphobic, extremely racist, and now we’re actually having conversations about it.” And, goddamn it, I like doing it this way. [Laughs.] It’s fun and it’s glitzy and it feels fantastic, quite frankly.