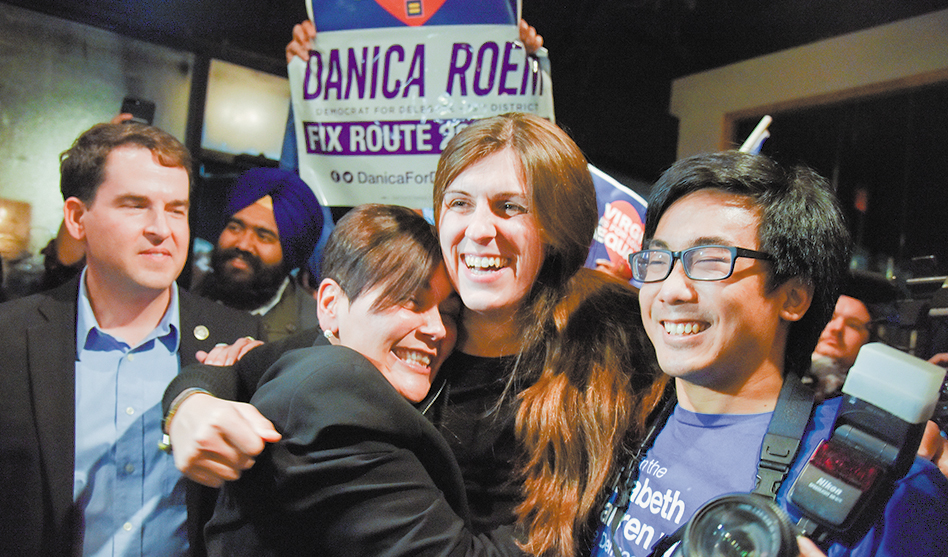 The off-year elections were good to LGBT candidates, Democrats

More than 75 percent of openly LGBT candidates running in the Tuesday, Nov. 5 off-year elections won. The total was 112: 106 Democrats, one Republican, one Independent, and four with undeclared party affiliations.

In Virginia, where gerrymandered districts installed Republican majorities in both the state House and Senate in 2017, courts quashed the map for this election, and voters gave Democrats a sizeable majority in both chambers.

All nine openly LGBT candidates in Virginia won their races, including five incumbents in the General Assembly. Among those five was Danica Roem, a transgender candidate who claimed a stunning upset victory against an incumbent Republican two years ago for a House seat. Tuesday, she won re-election against another anti-LGBT Republican challenger, with a margin of victory that was six points larger than in 2017.

Roem raised nearly twice as much money as her opponent, Kelly McGinn. McGinn had signed onto a letter calling marriage for same-sex couples “morally repugnant.”

Human Rights Campaign President Alphonso David said the results in Virginia sent “a powerful message that Virginians support a bold, progressive vision for the future of the Commonwealth.” David said HRC helped turn out 1.2 million “Equality Voters” in Virginia and spent more than $250,000 to elect “pro-equality candidates across Virginia.”

Pennsylvania, a state which Trump won by less than 1 percent in 2016, experienced a “blue wave” of voter support for Democratic candidates. According to the Philadelphia Inquirer, the Republican candidates were “fading even on friendly turf.”

The Keystone State fielded the largest number of LGBT candidates of any state with 14, and 13 of those 14 — all Democrats — won. That number includes Jessica Rothchild, who was elected to the Scranton City Council.

Ohio also voted for Trump in 2016, but Democrats did well there, too, this year, and all 12 of the openly LGBT candidates running there won, including new Toledo City Council member Theresa Gadus.

In Indiana, home state of Vice President Mike Pence and where Trump won by an almost 20-point margin over Clinton in 2016, the 25-member Indianapolis City Council picked up three new openly LGBT City Council members to join another who won re-election Tuesday night. Alison “Ali” Brown, Keith Potts and Ethan Evans will now join Zach Adamson on the capital city’s governing board. Brown and Evans are openly bisexual and married to spouses of the opposite sex. Evans and Potts both beat Republican incumbents.

Among the more stinging of the 21 LGBT losses Tuesday was in Telluride, Colo., where Mayor Sean Murphy lost his bid for re-election to a second term. Murphy was among only five incumbent LGBT candidates who lost their re-election bids.

In Houston, where five openly LGBT candidates were running as Democrats for City Council, only two won.

Outside Atlanta, in Doraville, Georgia, an openly gay City Councilman, Joseph Geierman, didn’t win enough votes to capture the mayor’s office, but he did win the most in a four-person field and garnered enough to force a December 3 run-off against the incumbent mayor.

Of the 112 openly LGBT candidates that won, 105 were running for local office. The field included 67 men, 44 women (including six trans women), and one non-binary candidate.

The national Victory Fund said 80 of the candidates it endorsed won Tuesday night. The organization said it directed more than $420,000 to its endorsed candidates.

“We are building a pipeline of out LGBTQ leaders at every level of government,” said Annise Parker, president of the LGBTQ Victory Fund and former mayor of Houston.

Other highlights among Tuesday’s results:
✭ In a Seattle City Council race, openly gay candidate Egan Orion appears to have beaten an incumbent in District 3. Orion, a gay activist and former organizer of Seattle’s Pride parades, told local news outlets that he was “really frustrated” that the corporate giant Amazon supported his campaign through a political action committee that gave half a million dollars to his bid. Orion said he felt the large donation to his campaign was “unnecessary” and “massive outside spending” violates the goals of district elections and democracy vouchers, according to KUOW News.

✭ In the Texas House district outside Houston, lesbian Eliz Markowitz was the only Democrat and the top vote-getter among six candidates. But now she’ll have to run against just one of those Republicans for the heavily-Republican 28th District seat. The runoff will take place in December.

✭ Former Florida State Rep. David Richardson will meet an opponent in a runoff for a seat on the Miami Beach Commission. Richardson came up just one point short of reaching enough votes to win the seat Tuesday. Richardson won 49 percent of the vote; his runoff opponent won 38 percent.

✭ In tiny Carrboro, N.C., openly lesbian Mayor Lydia Lavelle won re-election unopposed, and openly gay newcomer Damon Seils won one of three seats on the town’s Board of Aldermen — coming in second out of five candidates. In nearby Hillsborough, openly gay incumbent Matt Hughes came in first out of four candidates running for three seats on the Board of Commissioners.

✭ In Newton, Mass., transgender candidate Holly Ryan was unopposed for a seat on the city council, making her the first transgender woman to win election to public office in the 11th-most populated city in the state. Prior to running for office, Ryan served as the LGBT liaison for two mayors.

The Victory Fund estimates there are 765 openly LGBT elected officials nationwide. Parker said, “Americans are understandably focused on the 2020 presidential and congressional elections, but the LGBTQ candidates who won tonight will arguably have a greater impact on the everyday lives of their constituents.”