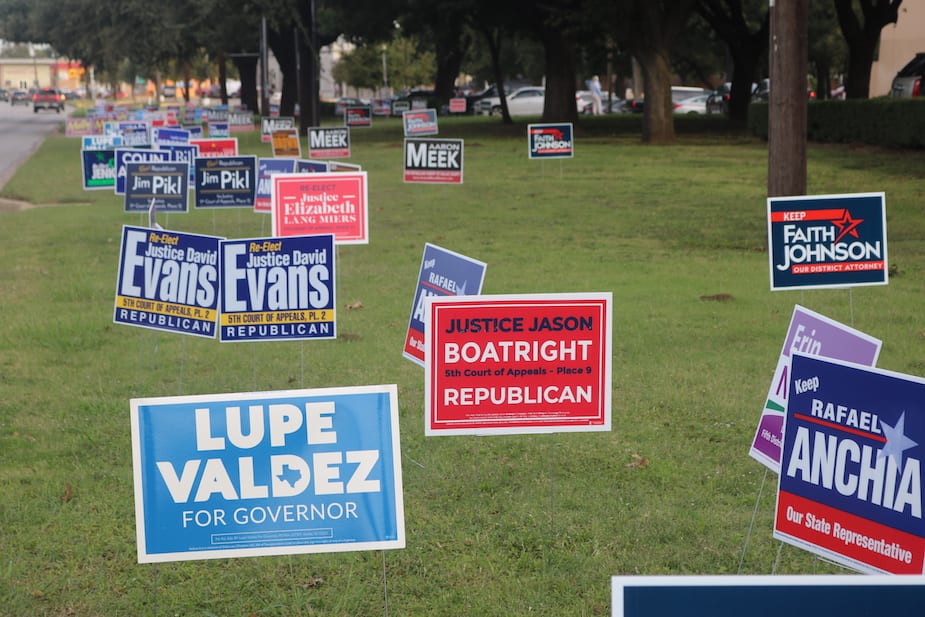 Early voting began in Texas this morning. Voters had to wait in short lines that moved quickly despite a long ballot.

While waiting to check in, one poll worker at Grauwyler Recreation Center, the closest polling place to Oak Lawn, explained the electronic voting machines. She cautioned voters that the last step after hitting the vote button was to press “confirm.” The ballot doesn’t register without that final step.

Because of the number of people who showed up the first morning of voting, she assumed many had not early voted before. Voters waiting until Election Day to cast their ballots don’t use the electronic voting machines. Instead, they’ll vote on a paper ballot that is then counted electronically.

Electronic voting machines are used to early vote so that the machine may display the correct ballot for any precinct throughout the county.

While most of the races are for statewide candidates and for judges who are running countywide or regionally, ballots may vary from precinct to precinct. For example, voters who live in Dallas City Council District 4 will cast a vote for one of 13 people running in a special election to replace Dwayne Caraway on the council.

Anyone who lives within the Dallas ISD will have four ballot initiatives concerning funding including the need to spend $75,000,000 on school buses (Proposition A), because voters decided to close Dallas County Schools that previously provided transportation. Another is a procedural vote to approve state recapture or Robin Hood (Proposition D). Dallas must pay money to support other districts, because, despite its dilapidated school buildings and low teacher pay, DISD is considered a wealthy district.

One more note about early voting: Once again there is no early voting place in the 75219 zip code — the most densely populated area in Dallas County. Reverchon Recreation Center is used for early voting only in city elections. The closest polling places to Oak Lawn are Grauwyler, which is on Harry Hines Boulevard, less than a mile north of Mockingbird Lane, and downtown at The Allen Courts Building, 600 Commerce Street; The Erik Jonsson Library, 1515 Young Street across from Dallas City Hall; and El Centro College Main Campus, 801 Main Street.

In North Oak Cliff, voting is taking place at the Oak Cliff Sub-Courthouse, 410 S. Beckley Ave. and Martin Weiss Recreation Center, 1111 Martindale Ave. west of Westmoreland Avenue off Clarendon Drive. In District 4, you may vote in the Kiest Recreation Center, 3081 S. Hampton Road, which is inside the park on Kiest Park Circle closer to Rugged Drive.