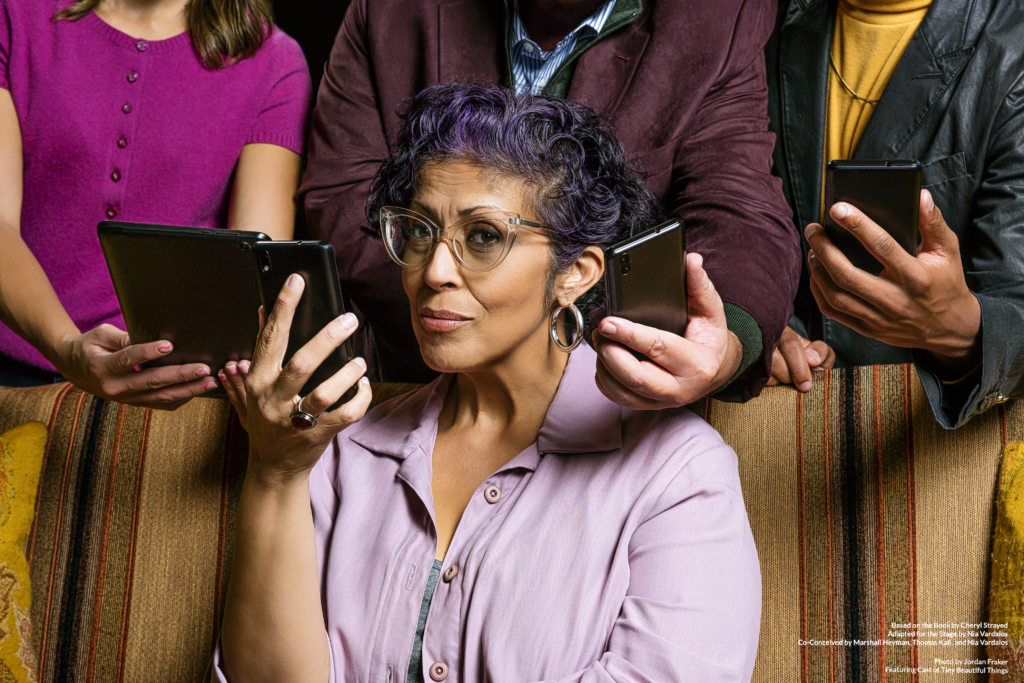 Dallas Theater Center has made its big return to the (indoor) stage this week with not just one, but two shows in repertory. Talk about a gift to theater fans. DTC opened the season with Tiny Beautiful Things based on the book by Cheryl Strayed (Wild) and adapted for the stage by Nia Vardalos (My Big Fat Greek Wedding). The show alternates with the premiere of Cake Ladies.

Based on Strayed’s  experiences as an online columnist doling out advice in Dear Sugar for The Rumpus back in 2010, the show was filled with vignettes of drama and comedy with a script that followed her back-and-forth with readers — and nothing was off the table.

Christie Vela leads the cast of four as Strayed who takes over the column from its originator. Quickly, she is confronted with deep questions by people seeking help on their transgender identity, sexual assault, their dead children and miscarriages while also pressing the Sugar for her real identity. Something in this play is gonna trigger something.

Director Joel Ferrell kept the pace of the show rapid enough to move forward (there’s no intermission) as the actors bombarded Sugar (and the stage) with questions seeking advice, but then he slowed it down just nicely when the commotion morphed into a scene. An actor posed a poignant topic in which Sugar dug deep into her own life of addiction, the loss of her mother and other personal experiences to formulate her responses.

The cast included solid performances by Christina Austin Lopez, David Coffee and Zachary J. Willis who served as Sugar’s readers. Each took on a variety of personas regardless of gender or age with sublime ease. They all bounced off Vela’s tour-de-force performance who delivered emotional monologue after monologue with depth, humor, tenderness and smarts.

In other new shows at the ATTPAC, TITAS/DANCE UNBOUND makes its return with the two performances by MOMIX Friday and Saturday at the Winspear Opera House.

The company of dance-illusionists brings its inventiveness and physical beauty to the stage under the direction of Moses Pendleton. For these two performances, MOMIX performed its version of Alice in Wonderland with its own twist in Alice.

“I don’t intend to retell the story, but to use it as a taking off point for invention,” Pendleton said on TITAS’ website. .

Guests will need to wear masks and follow TITAS’ and the AT&T Performing Arts Center’s health and safety measures.

Performances are at 8 p.m. For more information or tickets, visit attpac.org.

The drama-thriller set in the wholesome 1950s centers on a perfect little girl who may not be so wholesome. Tragedy strikes, hidden family secrets come out and Rhoda is right in the middle of it all. Sugar and spice? Hardly.