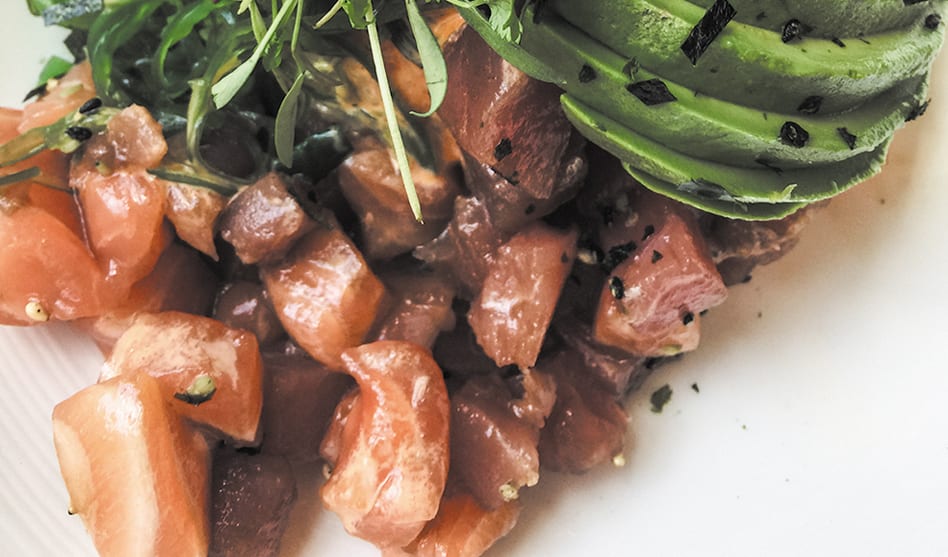 Sixty Vines, the Uptown eatery that also has locations in Plano and Houston, is famed for its wine program, and justly so. But the spacious, lovely restaurant inside the Crescent otherwise can be difficult to pigeonhole. Asian dishes? Definitely. Pizza and pasta? There’s an entire category on the menu for it. Farm-to-table style healthy eating? We detected that, too. That catch-all bugaboo “New American cuisine?” Of course. (It’s Dallas.) So the question is, when someone asks you “Where do you want to go for lunch? I want something close and not too heavy,” is Sixty Vines your first choice?

It wasn’t mine. But it was my dining companion’s, and we were out to explore.

He’s a fitness-conscious proto-pescaterian (no red meat, for sure, and everything else on an individual basis); I’m a fearless carnivore with a troubled conscience about eating better. Both of us wanted something fun and quiet that served both our food desires. And Sixty Vines turned out to be it.

We were happy to sit by the window and not feel rushed or rushed around. We decided summery and lite would be the way to go. But we also wanted to indulge a little.

My companion suggested the crispy zucchini ($7), which turned out to be a good if not inspired choice. In a world of heavy starches, the idea of deep-fried vegetables seemed like a great compromise. Topped with a few shishito peppers (none of them was a ninja, springing sudden heat on you without warning), we happily devoured it guiltlessly all before moving onto the entrees. And by entrees, I mean salads.

The salads at Sixty Vines, even at lunchtime, are as satisfying as they are beautiful. Nothing could feel more seasonally appropriate than the beet and goat cheese salad ($12) my friend got. As brightly colored as a drag queen at a Pride parade, its mix of fruits, herbs, chevre and lineup of purple, candy-striped and golden beets with a drizzle of white balsamic certainly complied with the mandate to eat healthy. Even more inviting, however, was the poké salad ($15), a mélange of sushi-grade ahi and salmon diced with Moscato ponzu, and doled over a dome of sticky rice, then crowned by half an avocado. I’m still not sure I understand what Sixty Vines’ personality is, but during July in Texas, it’s a refreshing way to spend an afternoon together.