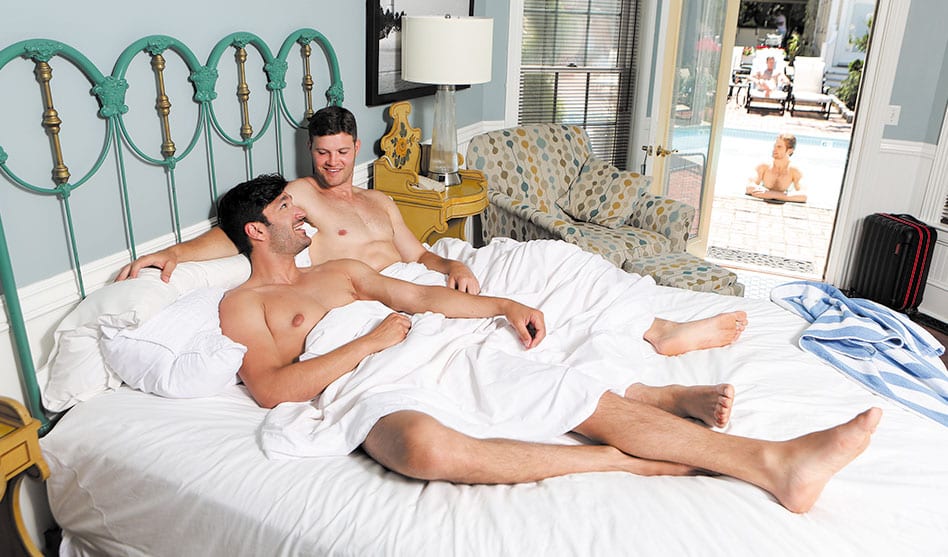 A couple enjoy their poolside room, above, at the Brass Key Guesthouse in Provincetown

In Provincetown, everyone lives for the inclusiveness of a guesthouse summer… or even a hot honeymoon

It’s September in Provincetown, Mass., the cool-crisp calm before the bitter-cold calm: wintertime, when travelers admire the cozy Cape Cod resort town’s frosted beauty beside a fireplace inside a cabin. The iced rich-blue harbor to the southeast, Cape Cod Bay to the south and west, Massachusetts Bay to the northwest and north, and the Atlantic Ocean to the northeast catch peeks of sunshine that the boys of summer cannot enjoy until they eagerly return again. 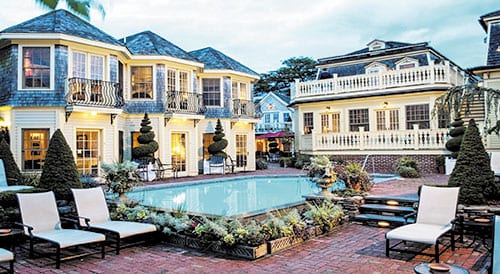 A luxury resort owned and run by three gay men who are partners in business and life — Thomas Walter, David Sanford and Ken Masi — the Brass Key Guesthouse has established itself as a home away from home for LGBTQ (and sometimes straight, married) vacationers. For the town’s biggest party, Carnival Week, last year at the Brass Key, held as a benefit for the Provincetown Business Guild, everything that might restrain pool-goers’ pure water fun (tables, lounge chairs) was stashed away to accommodate a line so long it looped around the block. A couple hundred attendees splashed and romped around in the pool, riding their gay floats, sipping their festive margs.

Nestled within the Brass Key’s 43 rooms and suites, housed in nine buildings, is an enchanting, flower-filled playground: the heated infinity-edge outdoor pool, a sizable 15-person hot tub, with rows of poolside recliners for ogling nearby frolickers (there’s even a small nudist section if you prefer an even, full-body tan). Within the pool area is an inviting communal patio, where every day at 9 a.m. I could step down from my pleasantly new-old upstairs room and enjoy a hot, hearty breakfast; at 5 p.m., I sip wine and overindulge on hearty spreads of artisan cheese set up for happy hour.

Guests will say “hi.” they might even pull up a seat. As a lone traveler, I greatly relish their amiable company. I meet a polite and self-effacing gay guy and his spunky gal pal, a lovely gay couple who invite me on their afternoon bike-riding excursion into town, some chatty lesbian wives, and a manager of a nearby boarding house known for its bathhouse-type appeal who took a late-night dip in the hot tub with me. His budget lodge is far from a resort, and he really loves their jacuzzi. In Provincetown, everyone is dreaming the same dream. 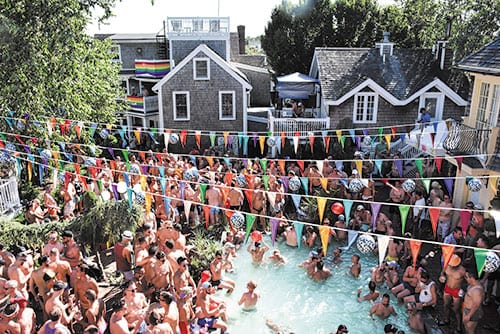 Convenient adventures await you elsewhere: Brass Key is just steps from Commercial Street, P’town’s main drag, lined with art galleries, clothing boutiques, trendy restaurants and glimpses of the bluest of water. Like clockwork, the ever-popular Tea Dance, the town’s outdoor gay dance party, begins at 4 p.m. and runs through 7 p.m. at the Boatslip Beach Club (which begins this weekend).

Charming, right? Walter and Sanford, who met in their senior year of high school, thought so, too. Even though Fire Island was closer, they would occasionally leave New York, where they were living, to head to the queer mecca. “We were just drawn to P’town,” Walter says. “We just fell in love.”

They had envisioned themselves living there one day but thought it a long shot. “It was always a pipe dream,” Walter says. But when they eyed a corner property, the Dusty Miller Inn, on Bradford Street, their hearts were set on owning it. Aware of their interest, their friend Adam left a message on their answering machine: The current owners of the guesthouse at the time were willing to sell, he told them. In 1998, Walter and Sanford officially became the owners of the property, now called Crowne Pointe Historic Inn & Spa (Masi would join them as a proprietor in 2007).

Their quaint sprawl comprises six buildings, including the full service Shui Spa, one of two spas in the country exclusively using Kiehl’s products, and The Pointe Restaurant. Named one of “The Best Hotel Restaurants in Cape Cod” by Fodor’s Travel, the pier-to-plate restaurant impresses with a modern, premier dining experience and a full wine bar.

Across the street is the Brass Key, a property they bought in 2008 (altogether, Walter estimated they own “around 20” buildings in P’town, including the Provincetown Pet Resort). Unit by unit, the owners gutted the Brass Key’s buildings to modernize their “grandma” look, adding luxury suites and the Shipwreck. Now, the property is coastal chic but still of another time. Walter calls it “historically hip.” With big hand-carved headboards and antique furniture, “each building has its own identity,” he says.

“Ken and I were saying it was closed off and known as the place rich old men would stay, and it’s not friendly,” Walter says. “We worked really hard to change that culture and change that perception.” On Shipwreck’s patio, a giant fire pit sizzles, occupied by a small crowd of diverse, friendly blend minglers. The non-guests look on through the gate, curious of what dreaminess and late-night debauchery awaits.

Inside the bar, Masi or Walter sometimes tend bar, because if you own a business, everything is your responsibility. As a business developer for a major entertainment TV giant (he said he’s unable to mention the company by name, per their request), Walter wore many hats, involving marketing, accounting and creative ventures, which offered him insight when it came to running his own business. Staying in a variety of hotels, he said, is where he learned hospitality dos and don’ts.

As for Sanford, his engineering background aids in maintaining the physical plan and overseeing renovations and maintenance, while Masi, a Duke grad whom Walter calls “chameleon-like,” was an editor for Boating magazine and does promo and website writing for their properties. He said their day-to-day is wildly unpredictable. 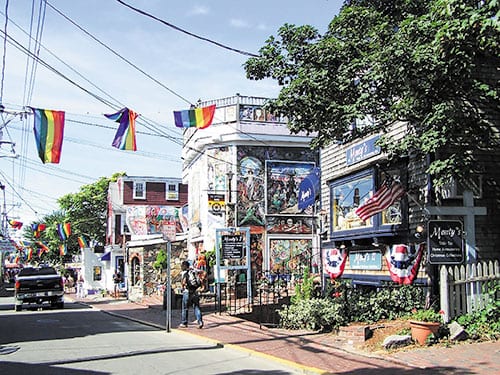 One late night during my visit, Walter was handling a diabetic guest who wasn’t responsibly managing his alcohol intake (he sent a pizza to the man’s room); the next morning Walter was checking on — and, naturally, playing with — the dogs at their pet resort. “Because there’s three of us, we’re able to divide and conquer,” he says. “David always thinks of the business as a cruise ship: I’m the captain and my job is to just get the cruise ship from one place to another.”

Their operation is fine-tuned, their dream realized. The three of them split their time between two gay-friendly places: Fort Lauderdale and P’town. Walter says P’town “is not necessarily a gay town; it’s a town where being gay is a non-issue; it’s not even really considered; it’s not even a factor in town politics.”

“It’s a town where sexual orientation is a non-issue, which is unique and special,” he emphasizes, “and one of the things that drew us to it.”

For this reason, my new P’town friends Jay and Alan return to Brass Key every year. They love it in September, just as the party winds down and solitude sets in. I loved it then, too.

One early afternoon, we walk the magnificent breakwater, a mile-long stretch of granite boulders, snapping photos of each other as we trek through scattered brush and the damp low-tide bed, bound for the lighthouse near the shore of Herring Cove Beach. They kindly treat me to dinner at Mistralino Ristorante on our last night.

After finishing our meal, we laugh some hearty laughs over more wine on the porch of the two-level Brass Key suite they book every year. For one night, we all experienced the same magic of a shared dream in the wine-drenched stillness rendered by our postcard-perfect surroundings. █