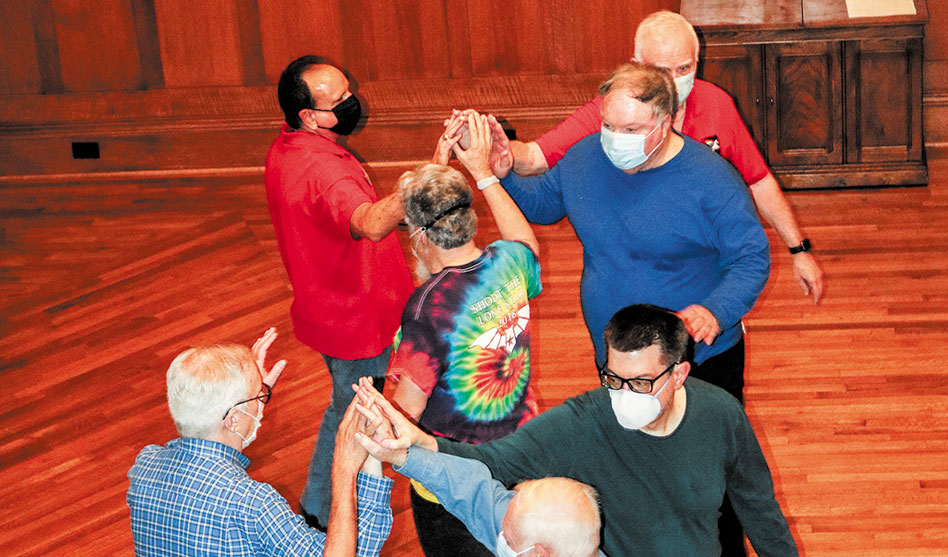 The LGBTQ Pegasus Squares host a fly-in in Richardson

Pegasus Squares, Dallas’ longtime LGBTQ square dance group, is holding its third fly-in — Scoot Back to Big D — this weekend, and group spokesman Wally Ropchan said he expects the event to bring in about 70 people for square dancing at the Hilton in Richardson

Ropchan said he just moved to Dallas from Philadelphia, but he’s been square dancing for 30 years. And he’s already an officer with Pegasus Squares. He has, he said, found new friends through LGBTQ square dancing groups around the country. 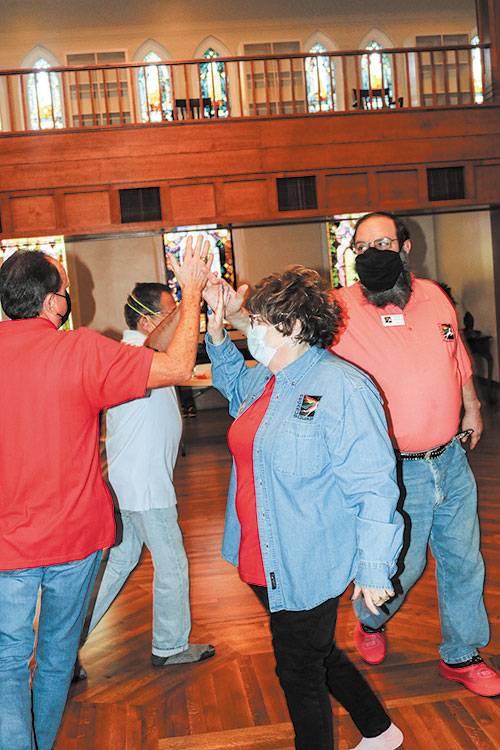 Ropchan has run a number of similar fly-ins across the country. So just what does it take to create a good event? A good caller. And the caller leading the first Pegasus Squares get-together in months last weekend was having a great time creating dances for the group.

Long-time member Alan Josephson said that recent afternoon was the first time the group had gotten together since November. Like all groups — especially those that involve activities with physical contact — they had suspended meetings during the pandemic. As things improved last summer after COVID’s Delta wave subsided, they began dancing again. But then the omicron wave hit, and they suspended dances again.

The group dances Sundays at 2 p.m. at Grace United Methodist Church on Junius Street in East Dallas. The historic church suffered damage during the freeze and grid failure last February, including damage to the hardwood floor in the room the group uses as a dance hall. That floor had to be replaced, but the restoration has been completed, and Grace UMC looks better than ever.

Dr. Joe Iser, the regent-at-large at American College of Preventive Medicine, is a square dancer and health advisor to a number of square dance groups across the country. He said he disagrees with current CDC advisories to a certain extent, preferring California rules instead. Under those rules, participants in the square dance fly in weekend will be required to show proof of full inoculation, including a booster shot.

“And dancers should keep masks on for now,” Iser said.

Iser said he knows he’s being more stringent, but rules should be tailored for the group. Square dancing groups tend to be older and more likely to have pre-existing chronic conditions, including HIV. And someone with a suppressed immune system may be at a higher risk of contracting COVID-19.

But, Iser said, he did more than rely on his instincts. He sent out a national survey to square dance groups asking, “If we went maskless, would you come or stay home?”

The answer? “Most wanted masks,” he said. But mask rules won’t apply to events that will be held outdoors.

Another benefit of mask-wearing, Iser said, is that cold and flu season just didn’t happen this year. And he had one last piece of advice on masks: N-95s work best filtering viruses, but they don’t fit someone with a beard very well. What’s more important, he said, is wearing a mask that fits well.

Josephson said despite the masks, it was just great to be back on the dance floor.

Anyone who is interested in dancing this weekend is welcome to register and attend. But since you need to know the calls to dance, Josephson, said anyone interested can come watch, too.

“Modern Western Square Dance has 50 calls,” Josephson said. The caller sings out the moves (the calls) and the dancers respond with the fixed movements. He likened it to a cross between synchronized swimming and Simon Says.

During the year, Pegasus Squares runs a 12-week cycle of lessons to teach the 50 moves you need to know. And, “Once you know those calls, you can go anywhere and dance,” Josephson said.

So just how did the group survive the pandemic? Just like every other group: They got together and danced over Zoom. And how do you do that? Easy: Each dancer just does the move called and pretends the partner is there.

Scoot Back to Big D includes 15 hours of square dancing, with dancing taking place in two halls concurrently for dancing at two levels — standard and advanced.

Two callers are coming in for the event — one from Chicago, one from Edmund, Okla.

The weekend has a “Let’s Go to the Hop” ’50s theme, but the dancing will all be in squares.