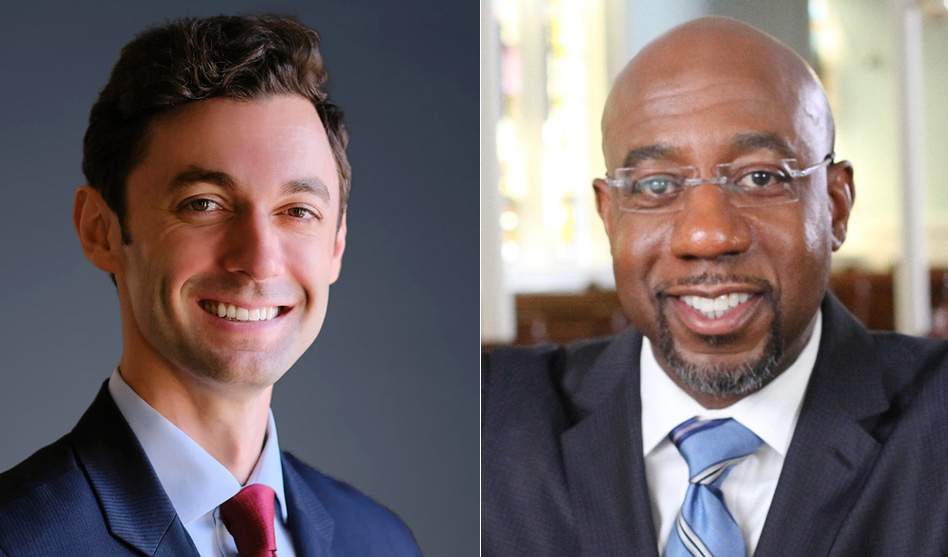 Democrats Jon Ossoff, left, and the Rev. Ralph Warnock both appear to have won their runoff races against Republican incumbents in the U.S. Senate. Their victories put control of the Senate in Democratic hands.

A look at the numbers in the Tuesday, Jan. 5, U.S. Senate races in Georgia indicate that Democrats have won control of the Senate, a development with enormous favorable consequences for the LGBTQ community and the nation.

The website indicates there is still 0.63 percent of the 4.4 million votes to count, but that is not expected to give Perdue the votes he needs to overtake Ossoff.

If those numbers stand, the new session of the U.S. Senate will include 50 Democrats and 50 Republicans, leaving any tie vote to Democratic Vice President Kamala Harris, who will be sworn in on Jan. 20.

The margin of victory in the Ossoff race — 0.38 percent — could require a mandatory recount in that race. The margin in the Warnock race — 1.22 percent —does not require a recount, though under some circumstances, the Secretary of State can direct one.

With Democrats in control of the White House, the House of Representatives and the Senate, “real change can happen,” said Tim Boyd, owner and publisher of the Georgia Voice newspaper. “This is a great day for Georgia and the nation.”

There was a lot riding on the outcome of Georgia’s two U.S. Senate races Tuesday. For the LGBTQ community, it was the difference between securing federal laws prohibiting discrimination based on sexual orientation and gender identity and watching existing laws ignored, challenged or misinterpreted to enable such discrimination.

Among the first order of business for the new Congress will likely be passage of the Equality Act, which has not been allowed a vote in the Republican-controlled Senate even after it has passed the U.S. House three times.

For the incoming administration of President-elect Joe Biden, a Democratic majority in the Senate means expeditious confirmation of cabinet members, such as openly gay Transportation Secretary Peter Buttigieg. It means control over members of the federal judiciary, including any vacancies on the U.S. Supreme Court. And it means the ability to follow through on a campaign promise to sign the Equality Act in his first 100 days in office. It means an opportunity to direct federal resources on defeating the COVID pandemic. And it means the ability to curtail  divisive rhetoric coming from the White House and try to mend the wounds of outrageous partisanship.

Both Democratic candidates in Georgia have said they will support passage of the Equality Act, a comprehensive bill in Congress that seeks to prohibit discrimination based on sexual orientation and gender identity in a number of arenas, including employment, housing, education, public spaces and services and federally funded programs.

Ossoff campaigned in at least one LGBTQ establishment, My Sister’s Room, a lesbian bar in Atlanta. According to the Atlanta Journal Constitution, Ossoff told a group of about 50 people gathered at the bar on a Wednesday morning, Dec. 23, that he would “defend our LGBTQ brothers and sisters with everything I’ve got.”

Warnock appointed more than two dozen openly LGBTQ leaders to a special “LGBTQ+ Advisory Council” for his run-off race against Loeffler. One of those council members, Georgia’s newly-elected lesbian state Sen. Kim Jackson, noted that both Warnock and Ossoff have a number of openly LGBTQ people on their campaign staffs.

“I don’t believe that there’s any such thing as equal rights for some. And so my journey on embracing, fully, members of the LGBTQ+ community and the issues that you bring to the table [is] part of my continuing trek to try to be a better leader and a better person,” Warnock told an Atlanta LGBTQ news organization in October.

Warnock made clear that he believes “all of us have to be full-throated in opposition to bigotry.”

“You can’t simply be committed to not saying things that are homophobic or transphobic,” Warnock told Project Q Atlanta. “In the same way that we ask white people to be anti-racist and not just acknowledgeit, we have to be full-throated in standing up against bigotry.”

Both Republicans have, in different ways, expressed a hostility to equal rights for LGBTQ people.

Sen. Kelly Loeffler, who was appointed to the seat last January when the incumbent resigned due to illness, introduced a bill last year that seeks to ban federal education funding to any school that allows transgender girls to compete in girls’ sports.

Loeffler co-owns a Women’s National Basketball Association team called the Atlanta Dreams but vigorously opposed the WNBA’s decision to dedicate its current season to Black Lives Matter, a movement co-founded by two self-identified queer women. In a letter to the WNBA commissioner, Loeffler said, “I adamantly oppose the Black Lives Matter political movement,” adding that she thinks “to subscribe to a particular political agenda undermines the potential of the sport and sends a message of exclusion.”

A number of WNBA athletes have been seen wearing t-shirts that say “Vote Warnock.”

Sen. David Perdue has rated a zero on the Human Rights Campaign’s Congressional scorecard on LGBT issues for every session he has been in Congress.

The Human Rights Campaign said it sent 12 staffers to Georgia to help support the two Democratic candidates in the run-off. It also organized phone banks, making more than 105,000 calls.

“By electing Jon Ossoff and Rev. Raphael Warnock, we can pass the Equality Act, address the epidemic of violence against the transgender community, and work to ensure no person faces discrimination because of who they are or whom they love,” said a statement on HRC’s website.

The statewide LGBT group Georgia Equality was also heavily involved, with phone-banking and texting to more than 600,000 voters.

“If we don’t have both chambers of the Congress … the rights of the LGBT community around the country will continue to be put on hold and de-prioritized — regardless of how supportive the president may be,” said Jeff Graham, executive director of Georgia Equality. He was speaking last week to an online forum sponsored by Project Q Atlanta, an LGBT news organization.

The final deadline for both in-person voting and absentee ballot arrival to election officials was 7 p.m. Tuesday. (Ballots from service members and citizens overseas have to be postmarked by Jan. 5.)

On Nov. 3, Republican Perdue beat Democrat Ossoff by 88,000 votes (or 0.2 percent of all votes). Because Perdue’s number represented less than 50 percent of the vote, the race was slated automatically for this run-off. Democrat Warnock beat incumbent Republican Loeffler by more than 343,000 votes; but because there was a third party candidate in that race, Warnock’s winning total represented only 33 percent of the vote, forcing him into this run-off, too.