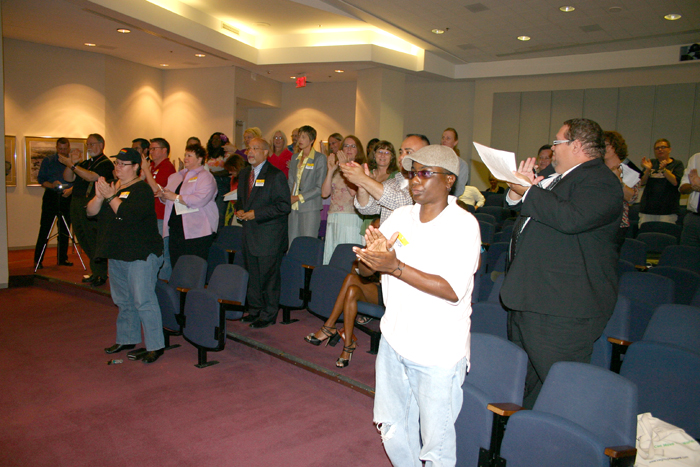 Audience members from the LGBT community deliver a standing ovation after DART’s Board of Directors gave final approval to transgender employment protections on Tuesday night.

After removing a one-word amendment that would have gutted the measure, DART’s Board of Directors voted uanimously Tuesday night to add transgender protections to the agency’s employment nondiscrimination policy.
About 50 people from the LGBT community packed the DART meeting, with roughly 10 of them addressing the board during a public comment period. They called on board members to approve the policy after first removing the word “except,” which was inserted by the board last week.
According to LGBT legal experts, the word would have nullified the proposed transgender protections and rescinded those for gay employees that were adopted by DART in 1995.
“A word is standing between us, and the word is ‘except,'” Stonewall Democrats of Dallas President Erin Moore told the DART board, adding that everyone has a sexual orientation and a gender identity. “All of these things also include you. Why not include us?”
Following the 30-minute public comment period, DART board member William Tsao made a motion to remove the word “except” and approve the new policy. The motion was seconded by board member Faye Wilkins before being approved unanimously.
The vote drew a standing ovation from the audience.
Later, however, some said they still had concerns about the final wording of the policy.
Cece Cox, associate executive director at Resource Center Dallas, sought clarification from the board following the vote. And Cox and others from the LGBT community huddled after the meeting to discuss the issue. They indicated they planned to work with DART on possible substitute language in the coming days.
“We moved the ball down the field,” RCD spokesman Rafael McDonnell said later. “We’re not at the goal line.”
Stay tuned to Instant Tea for video from the meeting, and for a full story, see Friday’s Voice.