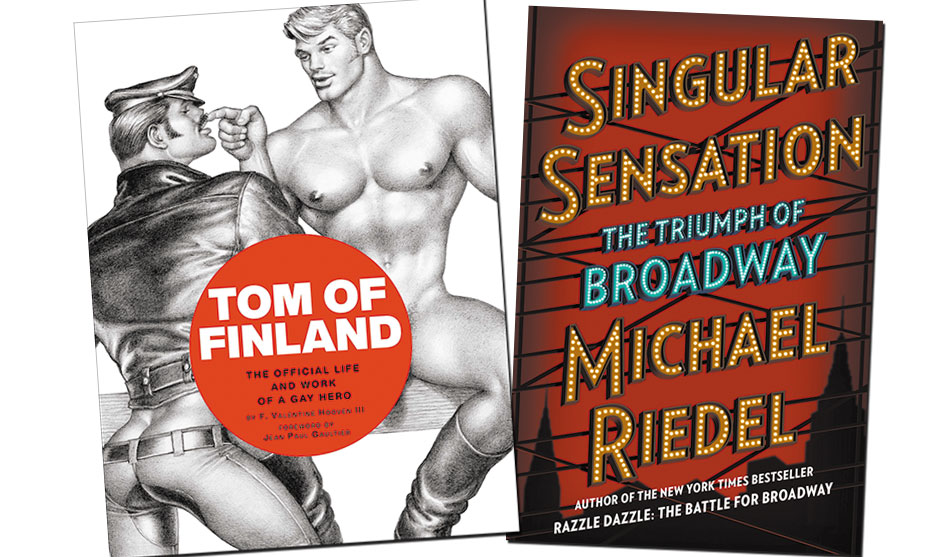 Tom of Finland: The Official Life and Work of a Gay Hero by F. Valentine Hooven III, foreword by Jean-Paul Gaultier. (c.2020, Cernunnos, a division of Abrams). $50; 295 pages.

Sometimes, you can’t worry about other people’s thoughts. You can listen to them, but you don’t have to hear them because there are days when making yourself happy supersedes any outside opinion, when you need to pay closer attention to you. As in the new biography Tom of Finland by F. Valentine Hooven III, sometimes what makes you joyful today can become a calling.

Born in the mid-spring of 1920 in Kaarina, Finland, young Touko Laaksonen was raised in a community of lumberjacks and farmers. He was fascinated by those “well-muscled laborers.” But he didn’t quite know why until he was an adolescent.

By the time Touko understood that he was homosexual, he’d become talented at sketching the men he saw, although, purely for his own enjoyment and sexual relief, he depicted those men naked. And for that, he had to hide his work.

He hid who he was, too: As a young man, he had a girlfriend, worked in a male-dominated world of advertising and even served in the Finnish army during World War II, where he sketched his uniformed “buddies” as gifts for their wives and girlfriends.

Uniforms — Touko couldn’t resist a man wearing one, and they were highly featured in what he called “my dirty drawings.” Those drawings included uniformed Nazi officers, artwork which got Touko “into trouble,” but had he gotten caught in his habit of having illegal, exceedingly risky anonymous sex with random men during the war, it could have been far worse.

Post-war, art was enough for Touko the sexual being. Though he had a lover (a word he claimed to dislike), art was again his release, more than any other physical act. This desire for erotica grew his portfolio throughout the 1950s, and he carefully shared it with “anyone he thought would appreciate it” — including the publisher of a new kind of international magazine who immediately accepted it for publication.

A year later, that magazine’s cover featured “a new, exciting, never-before-published artist” who now called himself Tom of Finland.

Let’s acknowledge this, up-front: Tom of Finland is absolutely filled with reproductions of Tom’s artwork from the 1940s through 1991, when he died. Nearly every bit of it is explicit in nature, drawn in typical over-the-top, over-endowed Tom of Finland style.

That artwork is why readers should turn their eyes away and toward the narrative.

Author F. Valentine Hooven III explains quite often in this biography — which was finished just before Tom’s death but never before published — how dangerous the mere creation of his art was for Tom of Finland: Literally, many times, the drawings could have gotten him jailed or killed.

This changes the meaning of the artwork, and it gives modern readers a sense of the amount of secret-keeping a gay man had to abide, pre-Stonewall.

Though Hooven’ voice can be annoyingly too sunny at times, the courageous turn this story takes is irresistibly appealing, so find it. Savor it first, for the artwork then again for a story that’ll fascinate you. Indeed, Tom of Finland will make you happy.

You know every single role in your favorite Broadway show. You can name all the actors who’ve ever filled those roles. You know the plot and every word to every song. How many times have you seen that show, bought the t-shirts, read a playbook, coveted the posters?

And how much is there that you don’t know? Come see in Singular Sensation by Michael Riedel.

Hollywood’s supposed Golden Age lasted from the 1930s until just after World War II. The Golden Age of Live Television, says Riedel, roughly spanned the Eisenhower years. The Golden Age of Broadway, then, was from 1943 to 1959. At about that time, a “British invasion” arrived, lasting for decades.

And then, in the later 1990s, everything changed.

Suddenly, low-budget musicals were profitable. Musical comedies became popular again, and plays “made a comeback.” Corporations began eyeing Broadway as a way to further their brand and make more money. Perhaps most importantly, “[a] new breed of producers” stood up to theater owners who’d previously had serious power, and new theaters were established.

Literally, the landscape of theater-going changed.

It wasn’t all singing and dancing, though. Says Riedel, “Broadway has a knack for survival,” and it needed that knack: The AIDS crisis was in full-swing then; terrorism left its mark on theater audiences abroad; Times Square was seedy, and New York City itself was struggling financially. The industry was ripe for change, and Riedel tells about it.

He writes of egos, ideas and role replacements, all of which often clashed. He explains how money and power make or break a show, especially in behind-the-scenes deal-making with theater owners who decide which shows run and which don’t. He writes of writers, actors, directors, costumers and criminals.

Riedel explains how a daytime talk show host made Broadway a must-see destination for New York City’s tourists. He explains how Disney made its mark on Broadway, with the help of Rudy Giuliani. He writes of a genius who never saw his masterpiece and never knew its popularity. And he tells of a show rescued from near-obscurity by a husband-and-wife team who couldn’t let it go.

House lights down, stage lights up and, within minutes, you’re transported to another place and time. Reading Singular Sensation is something like that: Author and theater columnist Michael Riedel takes readers backstage, overseas, onstage and in rehearsals and meetings with people you’ll recognize if you’re perpetually Broadway-bound. The nice surprise is that this serious-but-lighthearted, semi-scandalous collection of related stories will, because of the size of the names involved, make a non-fan happy, too.

Indeed, Riedel gives readers a fly-on-the-wall feel through a bit of non-catty, relatively kind celebrity gossiping, done with an absolutely correct amount of drama. This keeps Singular Sensation under control while maintaining a sense of being an insider, somewhat like reading Variety with a delightfully droll PhD.

It’s likely been a minute since you sat in a theater seat, and you miss it very much. But that shouldn’t stop you from enjoying Broadway on paper. So grab Singular Sensation and roll with it.