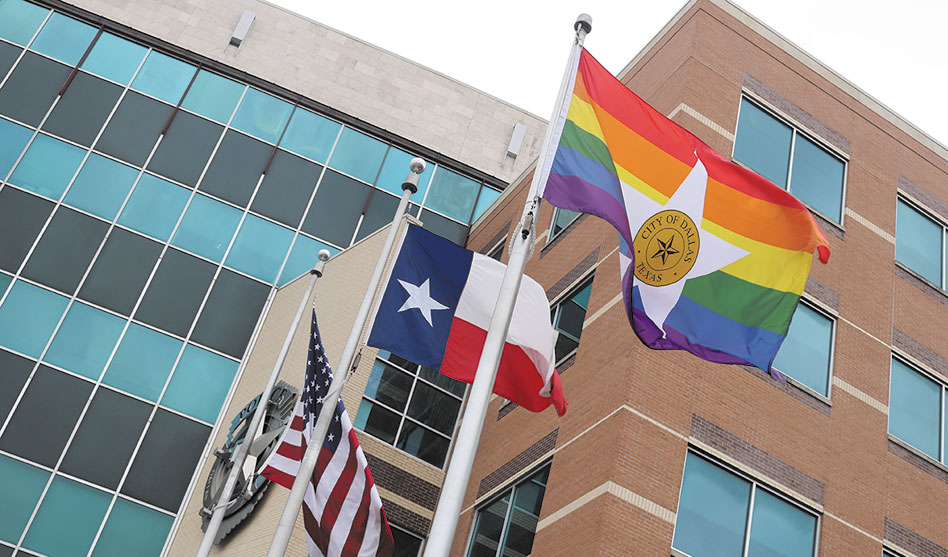 Dallas city Pride flags on Tuesday, June 1, were raised over Love Field, Dallas Police Headquarters and City Hall where they will fly throughout the month of June. Last June, the Dallas City Council voted to approve a design of the city seal over a Pride flag as the official Dallas Pride flag. Their vote included the provision that it would fly over Dallas City Hall every June.

Last month, the council extended the provision to allow the Dallas city Pride flag to fly over any city-owned or -operated facility.

Dallas is the only city with its own official Pride flag. 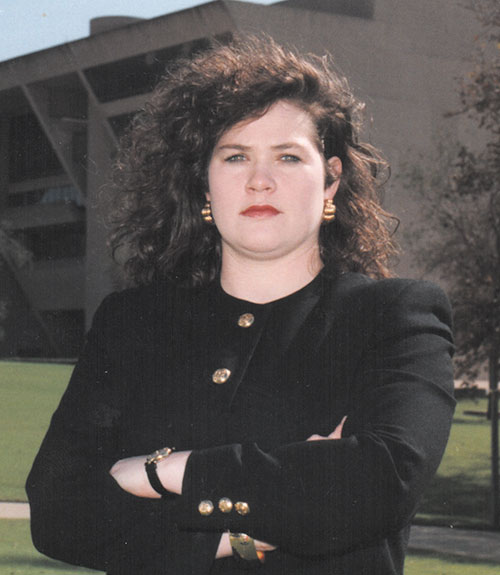 Most poignant of the flag-raising ceremonies was came when the flag was hoisted over Dallas Police Headquarters. About 100 uniformed officers participated in the event.

The event was noteworthy because of the past relationship the LGBTQ community had with DPD. In 1990, Mica England sued the state of Texas, the city of Dallas and then-Dallas Police Chief Mack Vines after the Dallas Police Department refused to consider her application to become a sworn officer because she is a lesbian.

The police department’s anti-gay-and-lesbian policy was based on Section 21.06 of the Texas Penal Code, which prohibited private, consensual sexual conduct between adults of the same gender. Violation of 21.06 was a Class C misdemeanor equivalent to a minor traffic violation. But the police department decided it was enough reason to prevent someone from being hired.

England was qualified for the job, having completed 72 hours of college credits toward a major in criminal justice.

In 1992, the trial court ruled in England’s favor, and the judge declared 21.06 unconstitutional. But the judge also dismissed the state as a defendant. So everyone appealed. The city and police chief appealed the ruling on 21.06, and England appealed the dismissal of the state.

The Appeals Court upheld the lower court ruling on the sodomy law being unconstitutional, but said that it could not rule on a criminal statute in a civil case. The city and DPD appealed to the Texas Supreme Court, but that appeal came two days after the window for appeal had closed. So the appellate court ruling stood, and the Dallas Police Department began hiring gay and lesbian cops. (Well, to be clear, there were already plenty of lesbian and gay cops on the force, but they were in stealth mode.)

But DPD still rejected England’s application on a technicality. 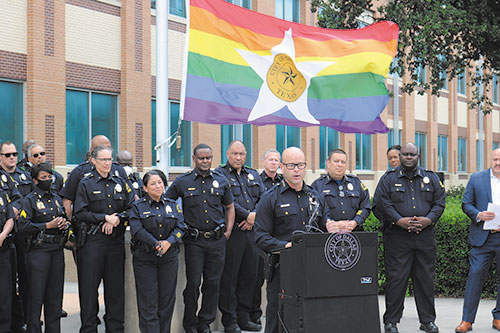 Even though it had already been declared unconstitutional three times — the first time coming in 1982 in Dallas case Baker v. Wade and third time by the U.S. Supreme Court in Lawrence v. Texas in 2003 — the law remains on the books. So far four out lesbians have served as LGBTQ police liaisons. At least one lesbian has risen to the level of major. Another was named officer of the year in 2015.

Now, throughout the month of June, the Dallas city Pride flag will fly over the building that once refused to employ LGBTQ police officers.

In addition to flying over DPD headquarters, a city Pride flag has been raised over Dallas Love Field and at Dallas City Hall. Love Field’s Director of Aviation Mark Deubner noted that 5 million people are expected to travel through the city-owned airport during June and will see the flag. Because the ceremony was held on a traffic island surrounded by cars entering parking garage C and those proceeding to the terminal, only a limited number of people attended in person.

The ceremony to raise the flag at Dallas City Hall attracted most of the Dallas City Council. This is the second year the city Pride flag will be raised over the plaza but the first year it will fly for the entire month.
Before raising the flag, Mayor Pro Tem Adam Medrano distributed three awards on behalf of the Mayor’s LGBT Task Force, which he chairs.

The Spirit of Equality Ally Award was given to Councilman Adam Bazaldua, who has been a reliable and active ally on the council working closely with the three out council members.

The annual Leadership Award went to Ahmad Goree and Kirk Myers. Goree was honored for his work and advocacy for the LGBT community with resources during COVID-19 and his continued behind the scenes support with other social issues this community faces. Myers was recognized for his work as founder and CEO of Abounding Prosperity Inc. and lead organizer of Dallas Southern Pride.

During the pandemic, API provided COVID-19 care kits, gift cards, rental assistance and other aide to the LGBT community, API’s South Dallas neighborhood and beyond.