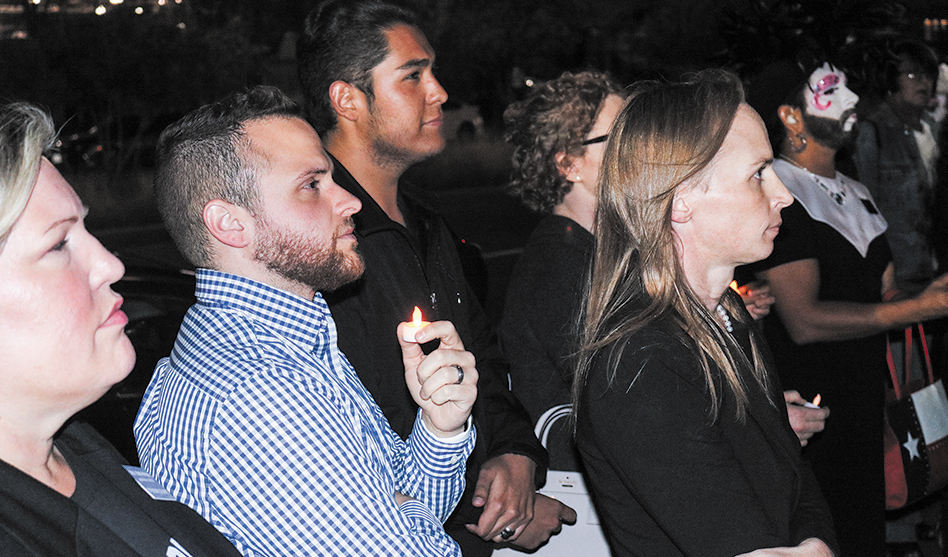 Erin Wyma, left, Ethan Avenzino and Jayla Wilkerson were among those at a vigil at Dallas City Hall, remembering victims of anti-trans violence. (David Taffet/Dallas Voice)

Dallas Assistant City Attorney Jayla Wilkerson didn’t pull any punches as she welcomed attendees to the Transgender Day of Remembrance services this week: “This has been a shitty year.”

Wilkerson, who heads Transgender Pride of Dallas, and Cathedral of Hope’s Transgender Council coordinated the Wednesday night commemoration held at the J. Erik Jonsson Library across the street from Dallas City Hall.

“This is an epidemic of violence,” said the Rev. Erin Wyma as she introduced a short video remembering the 22 trans women killed in the U.S. since last TDoR.

What brought this year’s ceremony so close to home was that four of the 22 murders reported this year were committed in Texas, and two of those murders — those of Muhlaysia Booker and Chynal Lindsey — took place in Dallas within just weeks of each other.

As the names of hundreds of transgender murder victims scrolled across a screen, participants read the names of the 22 U.S. victims, including each victim’s date of death, age and how they were killed. Then presenters read a quote from a friend of each victim to remind everyone attending these were more than just victims; these were each women whom other people loved.

Stacey Monroe spoke at the event about her friend, Daniela Calderon-Rivera, who was shot multiple times at a bus stop in Northwest Dallas on Sept. 20 — but survived.
Monroe said she was there as a “voice for someone who lives in fear” now after having fled Honduras because of violence against the trans community there. “She saw this as a land of opportunity. Then on Sept. 20, someone — a monster — tried to end her life for being trans.”

Monroe called on the trans community and allies to do better.

Calderon-Rivera didn’t attend. Monroe said it was because since her shooting, she’s had trouble dealing with crowds. And since her attacker is free after being released on bond, she fears being out in public. 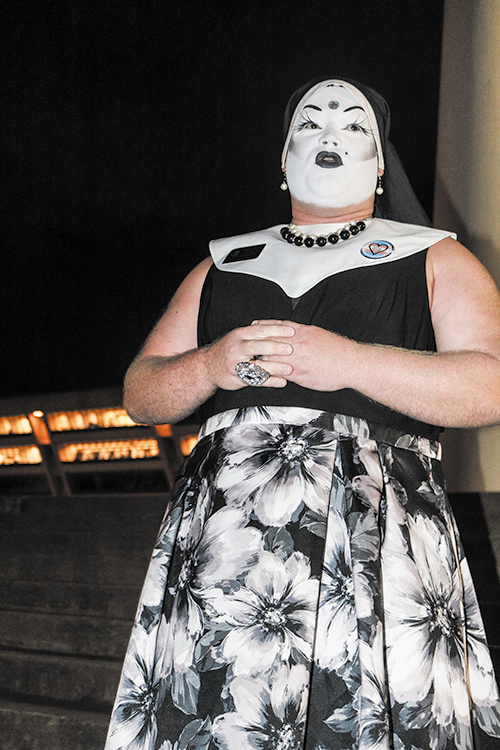 “The emotional and physical damage is irreversible,” Monroe said. “I fear for her safety.”

Domingo Ramirez-Cayente was arrested within days of the attack on Calderon-Rivera and confessed to shouting gay and trans insults at Calderon-Rivera before shooting her. Before his victim was even able to leave the hospital, he was released from jail on a $25,000 bond and soon after disappeared, possibly having fled the country.

On Thursday, Nov. 21, Monroe said, a rally was scheduled for 6 p.m. outside the Frank Crowley Criminal Courts to bring attention to the case. Specifically, she said, they’re demanding Dallas Police Chief U. Reneé Hall and Sheriff Marian Brown work with the FBI and the Consulate of Mexico to find her attacker and bring him to justice. (The event was scheduled after Dallas Voice press time. Visit InstanTEA at DallasVoice.com for coverage.)

In addition, Monroe said, the group supporting Calderon-Rivera wants Dallas County Commissioners Court to review Judge Hal Turley’s decision to set the bond in an attempted murder case so low. And finally, she said, once he’s caught, Calderon-Rivera and her supporters want District Attorney John Creuzot to prosecute Ramirez-Cayente to the fullest extent of the law.

Although it wasn’t noted during the ceremony, the event took place on the library’s seventh floor. That’s where Dallas’ original copy of the Declaration of Independence is housed, the only copy of the document west of the Mississippi.

After the event in the library, several dozen participants walked across the street to the steps of Dallas City Hall for a candle lighting ceremony, a re-reading of the names of those who were murdered in the U.S. and comments by members of the crowd.

One of the Sisters of Perpetual Indulgence offered a prayer for trans women who have been attacked. One trans person talked about being estranged from family. Others spoke of living in fear, while Monroe said, “I see progress.”

Since the massive surge of publicity surrounding Booker’s and Lindsey’s murders, as well as another attack on a Dallas trans woman in April, police have re-opened investigations into earlier cases. This week, Dallas Police asked for help in solving the 2017 murder of trans woman Armani Dante Morgan.

She was reported missing by her family on June 22, 2017. Just over a month later, her body was found near the 2900 block of Wilhurt Ave., an area west of I-45 and just south of Illinois Avenue that, police said, she was known to frequent.

Anyone with information related to her murder is asked to call Dallas police Det. Michael Yeric, Special Investigations Unit, at 214-671-3677.

Morgan is one of at least three transgender women known to have been killed in Dallas in the last four years whose murders remain unsolved. The others are Shade Schuler, whose decomposing body was found July 29, 2015, in a field off Regal Row, and Brittany White, who was found shot to death in her car in a parking lot in far southeast Dallas on Oct. 21, 2018.

This year, in addition to the two Dallas murders, Tracy Single and Itali Marlowe were killed in Houston. Worldwide, at least 331 transgender and gender diverse people have been murdered since the last Transgender Day of Remembrance.

In Dallas, Kendrell Lavar Lyles, 33, who had been arrested the previous day in connection with two unrelated murders was charged on June 12 for the murder of Muhlaysia Booker. Lyles remains in the Collin County jail.

Although Lyles was initially considered a person of interest in Chynal Lindsey’s death, police on June 20 announced that they had arrested Ruben Alvarado, 22, and charged him with murdering Lindsey. Alvarado remains in the Dallas County jail with bond set at $500,000. 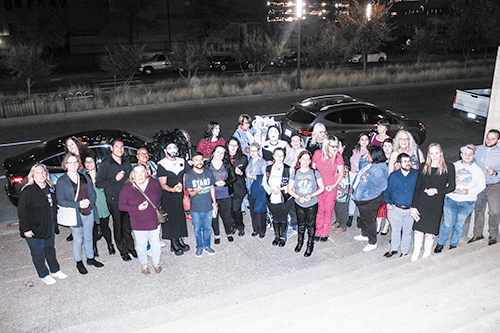