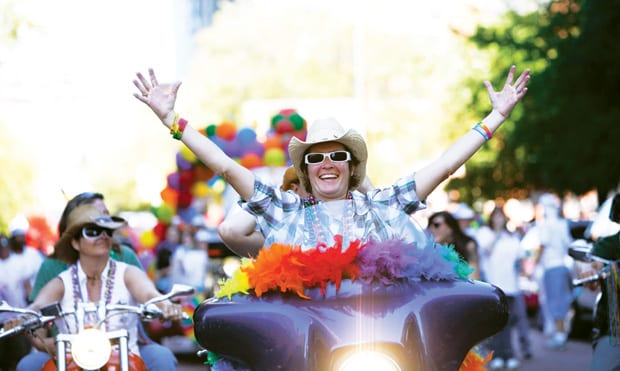 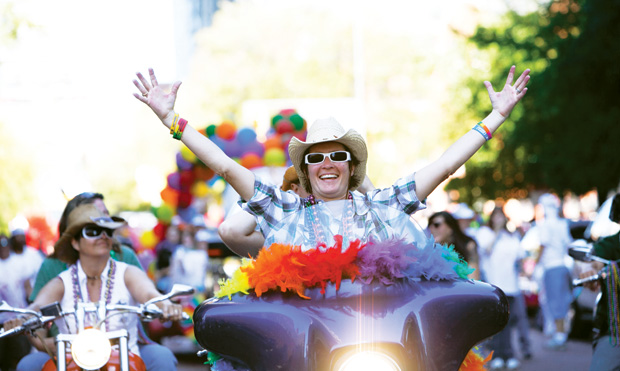 When Sharon Herrera and Tori van Fleet-Kujala learned they would be this year’s Tarrant County Gay Pride Week Association grand marshals, along with former AIDS Outreach Center director Allan Gould, they were both shocked.

“I was shocked and tearful because I thought of my friend and mentor Tom Anable,” said Herrera.

Fleet-Kujala, meanwhile, was shocked simply because she was considered. “I don’t know why they chose me. I’ve done much less for the community than others. I’ve just been myself. It’s still a real honor.”

Given this year’s theme, which promotes putting the “unity” in “community” their shared sense of shock could not be more appropriate. Nor could the fact that Herrera is the parade’s first Latina lesbian GM and Fleet-Kujala, a transwoman who transitioned on the job, is its first trans GM. She is also only the third trans GM in the state.

This year’s pride week, which takes place across Fort Worth from Oct. 2–12, is the largest in TCGPWA’s history, said Tina Harvey, its president. She estimated around 4,000 participants in the annual parade and festival on Oct. 4, and the picnic on Oct 5. As of press time, she said vendors were still calling her, seeking to have a booth during the festival.

Demand and participation is so high she said the street festival has outgrown downtown’s General Worth Square.

The events, participants and GMs represent the rapid at which Tarrant County, one of Texas’ fastest growing, is diversifying. Pride week is adapting to the county’s demographics. But the changing attitudes toward LGBT people pique interest as well.

For one, moving the parade to downtown Fort Worth from the Near Southside neighborhood increased visibility. “I had people tell me the first year we moved downtown that they had never been among so many LGBT people. Media told me they had never met a nicer crowd.”

That trend also reflects changing societal attitudes toward LGBT people, even in a county as conservative as Tarrant. “I would go to night clubs and hope my car was not spotted. I could have lost everything,” she said. “Now LGBT people can go any place without retaliation.”

This year’s size and scope of events represent how far the county has come since the TCGPWA’s founding in 1981. According to the TCGPWA website, founder Gary Taylor, who went by the drag name Raina Lee, hosted gatherings for her LGBT “family” at Forest Park’s Shelter House, describing the events as “a place to gather, out in the open, in public, where we could be exactly who we were, without discrimination, without judgment and without fear.”

The former private gathering in conservative Tarrant County is now a multi-day event featuring social and educational events and anchored by a renowned LGBT festival and international rodeo. It is now such a pivotal community that Fort Worth’s Convention and Visitors Bureau promotes it. A number of prominent local officials, mostly straight allies, march in the parade.

Fairness Fort Worth even secured Dr. Matthew Heinz, director of provider and LGBT outreach for the US Department of Health and Human Services, to speak at various events over the weekend about the Affordable Care Act. He will be accompanied by Katie Keith of Out2Enroll.org, which assists LGBT people with and train navigators about LGBT provisions within the ACA. They will speak on Oct. 5 at CoH-Mid Cities at 11 a.m., Agape MCC from noon-1 p.m. and at the picnic.

Increasing acceptance of LGBT people, however, has consequences. “The community has spread out,” which prompted her and her committee to choose the “unity in community” them, as a way to remind participants “we are a family.”

Young people especially must be reminded of the importance of the LGBT community, Harvey said. Young people are more likely than any other generation to support LGBT people. So her and older LGBT people must remind them they are still part of a family. “I don’t want us to lose that bond.”

Unity and community also means crossing county lines. This year’s Alan Ross Freedom Parade featured two GMs from Tarrant County for the first time: Rafael McDonnell, who works in Dallas at the Resource Center but lives in Fort Worth, and the Rev. Carol West of Fort Worth’s Celebration Community Church. In turn, McDonnell invited Fleet-Kujala to accompany him on his float. In turn, she asked McDonnell to accompany her.

Keeping a tight knit community also means remembering the struggles that bring us together. In a statement, Heinz defines his role with HHS as a response to the tumultuous history of LGBT people. “Every person deserves to have affordable health insurance so they can lead healthy and productive lives. LGBT families have historically lacked access to healthcare and unfortunately are much more likely to be uninsured compared to non-LGBT families–it is a priority of the administration to address this problem.”

Addressing LGBT issues is no longer just a fight for rights, as indicated by the deferral government’s push for addressing LGBT issues. Harvey said pride is also now a genuine celebration of our community. The advances made for LGBT people are a big leap from Raina Lee’s gatherings at Forest Park’s Shelter House 33 years ago. But they’ve stayed true to her intention of bringing the LGBT family together out in the open and to be free of fear.

This article appeared in the Dallas Voice print edition October 3, 2014.