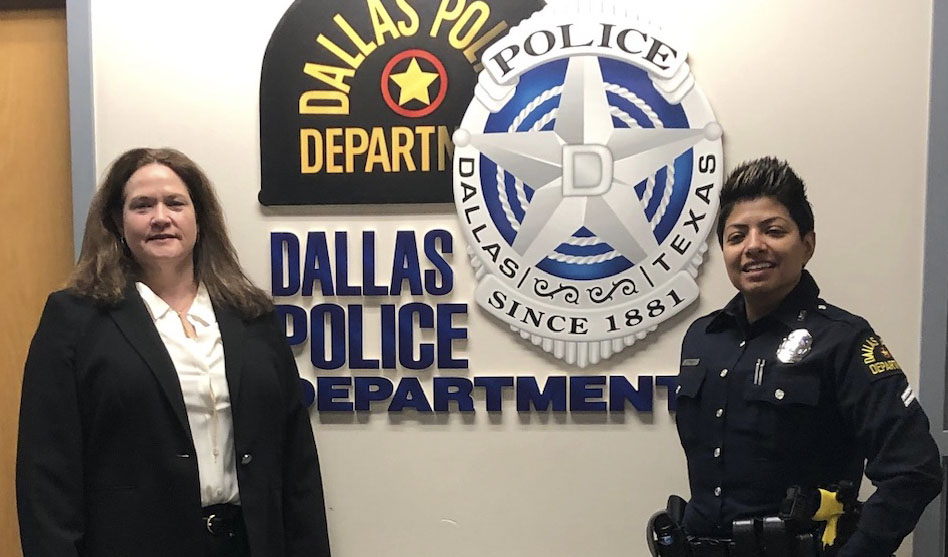 Mica England returns to Dallas to be honored by the Holocaust and Human Rights Museum and gets an invitation to visit the Dallas Police Department 30 years after starting her fight to change DPD and the city’s discriminatory hiring policies. (Photo courtesy of Mica England and the Dallas PD)

“It really felt like I had come full circle.”

That was how Mica England described how it felt to get a personal invitation to visit the Dallas Police Department headquarters to meet the department’s LGBT liaison officer and to speak at a meeting with Chief U. Renee Hall and the department’s deputy chiefs — 30 years after she first walked into the DPD offices to apply as an officer.

England was in Dallas to attend the grand opening of the new Dallas Holocaust and Human Rights Museum, which includes a tribute to England and her role in the fight for LGBT civil rights in Dallas.

It was July 1989 that England, then working as a chef in Tulsa when she first applied to be a Dallas police officer. She had met with recruiters in Tulsa who had told her at the time that the fact she was a lesbian would not disqualify her as an applicant. But when she came to Dallas and applied, one of those same recruiters refused to allow her to even finish the application process when England acknowledged during an interview that she was a lesbian.

By early July, England had contacted William Waybourn with the Dallas Gay Alliance, and together they began the fight to end DPD’s long-standing “secret policy” of refusing to hire openly lesbian and gay people, based on the fact that Texas’ sodomy law, Section 21.06 of the Texas Penal Code, made consensual same-sex contact between adults a Class C misdemeanor. England eventually sued the city for discrimination, challenging not only the police department’s discriminatory policies but also the state’s sodomy law. She eventually won at the trial court and appellate court level, in February 1993, with the appeals court ruling forcing the city to lift its anti-LGBT hiring policies and invaliding the sodomy law within the 34 counties covered by the 3rd Court of Appeals in Austin. The Texas Supreme Court, in May 1993, rejected the city’s appeal of the 3rd Court’s ruling — not on the merits of the case but because the city had waited too long to file its appeal.

“I think [the city] waited too long on purpose, because they knew they would lose” at the State Supreme Court, too, England said on Tuesday, Sept. 17, while visiting Dallas with her wife, Lori England. “If they had filed the appeal in time, and the Texas Supreme Court had ruled in our favor, we could have gotten rid of the sodomy law state-wide right then, in 1993.”

It wasn’t until 2004 when the U.S. Supreme Court ruled in Lawrence v. Texas that the Texas sodomy law — and all such laws in the U.S. — were struck down.

Also during her visit to Dallas this week — at 9:06 p.m. on Monday, Sept. 16 — her friend Gary Swisher arranged for the lights on the Bank of America building in downtown Dallas, to change colors for five minutes in her honor. She said she was given her choice of the day and time and chose Monday in recognition of the 30-year anniversary of applying to the police force, and 9:06 p.m. because, on the 24-hour clock, that is 21:06, in recognition of the sodomy law that her lawsuit successfully challenged.

And today — Wednesday, Sept. 18, the day that the Dallas Holocaust and Human Rights Museum officially opens to the public — is “Upstander Day” in Dallas, recognizing the human rights heroes who defend the powerless and stand up to injustice. England is one of the museum’s “upstanders.” 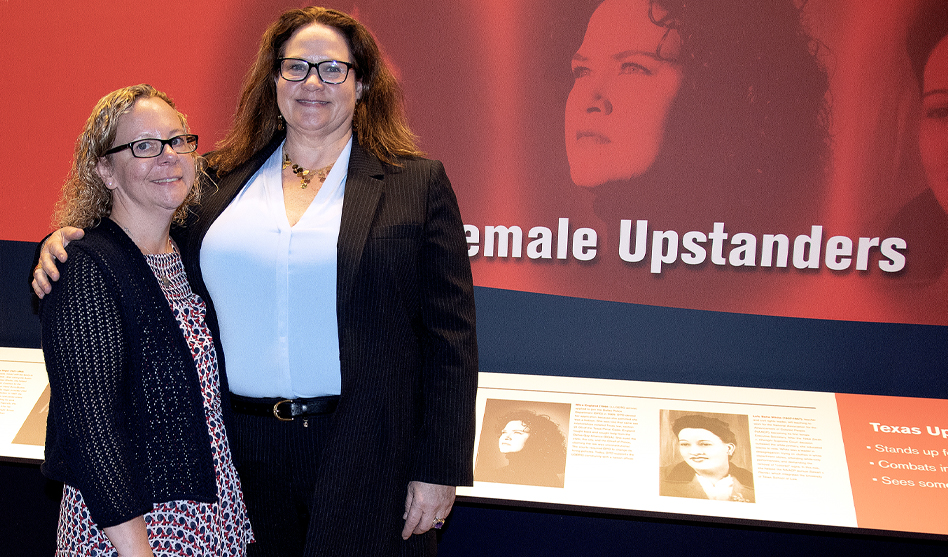 But Tuesday, the day that England and others had a chance to tour the museum before it opened to the public, was an especially memorable day for the woman who, basically, fought the law and won. Because Tuesday was the day that England was invited to visit the DPD headquarters and speak to officers there.

Then England was invited into a chiefs meeting where she had the chance to tell her story to and answer questions from Dallas Police Chief U. Renee Hall and a number of the department’s deputy chiefs, putting a human face to the stories those officers had heard and the policies the department now follows.

It was, England said, a most gratifying moment.

“Cpl. Roman gave Lori and I a tour, which was really great. We got to meet [Robinson], and they told us about the programs they do. I didn’t realize that all the functions they do [in the community] are donation-based,” England said.

“Then [Robinson] had me go into the chiefs’ meeting, with Chief Hall and the deputy chiefs. I talked to them about my experience [in 1989], about the application process and what happened when I got to Question 14,” she continued. “They told me it was nice to finally be able to put a face with the name. It’s good for the deputy chiefs to know why these policies are in place today. I really felt like I had come full circle.”

Once the 3rd Court of Appeals had ruled in her favor and the state supreme court had rejected the city’s appeal, England was given the chance, in 1993,to apply again for what had been her dream job. But she never went to work for the Dallas Police Department.

“I guess there are a lot of people who don’t know the reason I didn’t end up taking the job,” England said. “One day, I was walking down the hall at the police department headquarters, and a male officer was standing there. As I walked past, he said to me, ‘Do you know what friendly fire is?’

“And at home, on my private phone number that nobody was supposed to know, I was getting calls, death threats,” she continued. “I wish I had made that more clear at the time, about why I didn’t stay. I felt like I had done all I could. I had overturned the policy in the city, and I had overturned the sodomy law in 34 counties. But I was frightened by the threats and the friendly fire comments, and I just kind of snuck away.”

England said that while she doesn’t “think I could have done anything differently,” and the death threats scared her into leaving Dallas, “I am glad I did what I did. I can see that it has done Dallas a lot of good, and it’s done good statewide, too. And I think being on Larry King Live helped bring a lot of attention to the [LGBT rights] struggle nationwide.”

When England left Dallas back in the early 1990s, she went to New York City where she began working as a house manager/private chef for prominent clients there. In 2011, the family she worked for asked her to move to Sarasota, Fla., with them, and she did. She has been with that same family for about nine years now.

Five years ago she met Lori, and the two were married two years ago.

While England’s life today is very different from the life she led and the goals she had 30 years ago, she said she felt “really honored” to have been included in the Dallas Holocaust and Human Rights Museum, and “happy to know that what I did was important for the city of Dallas and for the LGBT community. It’s gratifying to know that [the Dallas police] recruit from the LGBT community now. That’s important. I think a police force should be representational of the communities they serve.”

And although her battle was fought and won so long ago, England said she knows that the LGBT community’s work — and hers — continues. “When I looked around the museum [Tuesday] and then compared it what’s going on out in the world today, it was really frightening,” she said. “We are going backwards in so many ways. Trump and Pence keep taking rights away from transgender people and others. The LGBT community as a whole, we have a target on our backs. We have to keep fighting.” 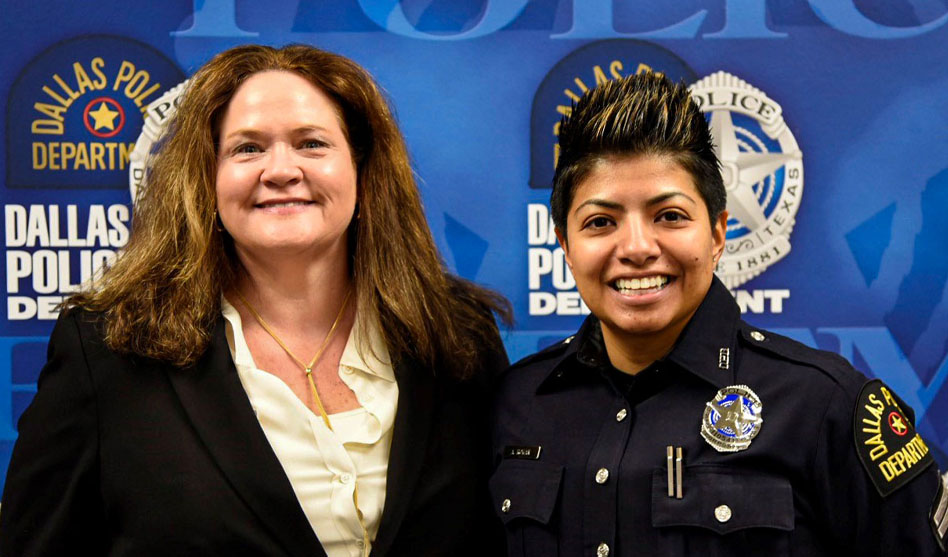 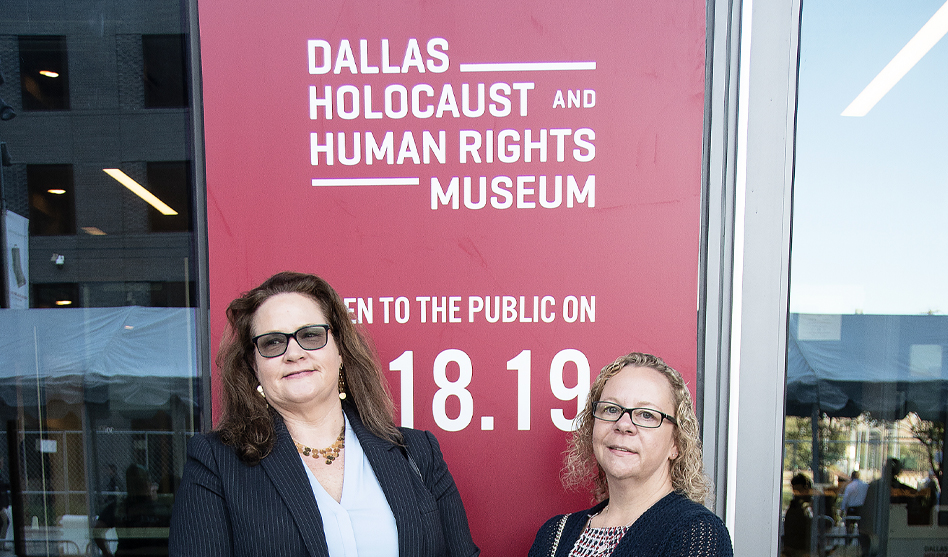 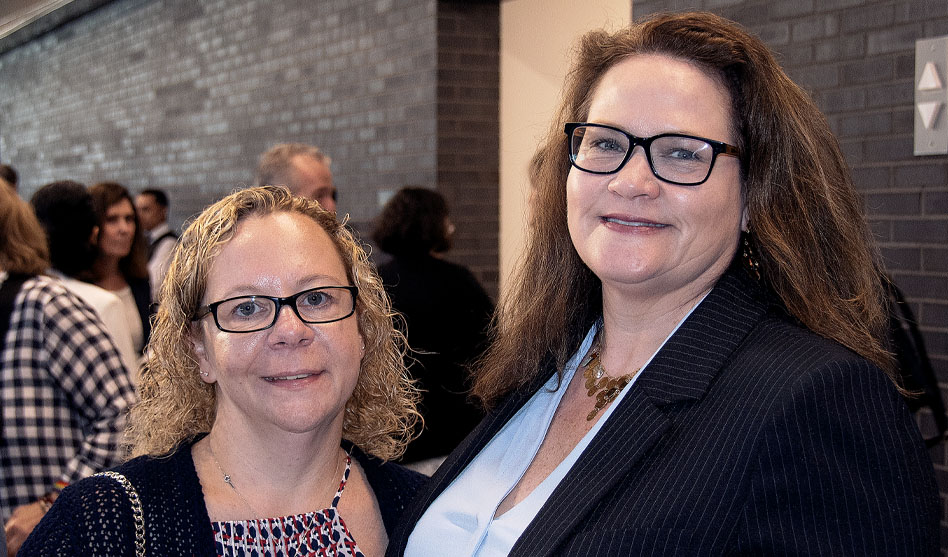