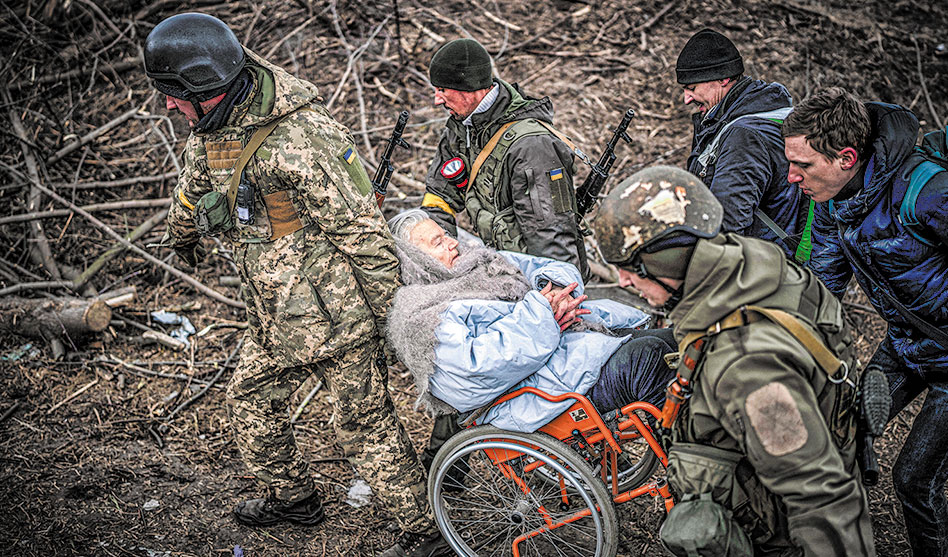 Ukrainian soldiers and militiamen carry a woman in a wheelchair as the artillery echoes nearby, while people flee Irpin on the outskirts of Kyiv, Ukraine, on March 7. (Emilio Morenatti/Associated Press)

Support for Ukraine is uniting the U.S. against unprovoked Russian aggression 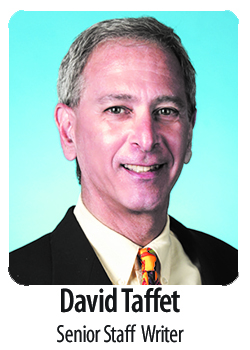 I never thought of myself as half-Ukrainian. My mother’s father, Harry, always said he was Polish. That was his native language, but he was born in L’viv — he called it L’vov — which had been part of Ukraine since the late 1700s.

My father’s father, Sol, said he was Romanian, born in the Austro-Hungarian Empire, in the town of Terebovlya — he called it Trembowla — which dates from at least 1097. He spoke many languages, but my father spoke Hungarian with his parents until he was five. I always thought that was a useful language to have growing up on the New Jersey shore. Terebovlya is part of Ukraine now.

Both grandfathers left Europe in the late 1890s. Sol came to the U.S. after his brothers, who had already arrived, promised the streets were paved with gold. When he found out they weren’t really, he went back. But the Kaiser was threatening war, so Sol decided New York wasn’t so bad after all — gold streets or not — and headed back to the States.

Both grandfathers came to the U.S. for opportunity. Harry became an insurance salesman who opened an office off Wall Street in lower Manhattan. He worked until he was 90. Sol opened Taffet’s Department Store in Nutley, N.J. During the Depression, he lost the store and became a salesman.

Both L’viv and Terebovlya suffered during the Holocaust. In 1939, the Jewish population of Terebovlya was 1,486. On April 7, 1943, German soldiers rounded up 1,100 of them and shot them in the neighboring town of Plebanivka.

(See LGBTQ-related news coverage from Ukraine by the Washington Blade here and here.)

Now, Putin has sent his troops in, and thousands of Ukrainian civilians have been killed, more injured and at least a million left homeless. 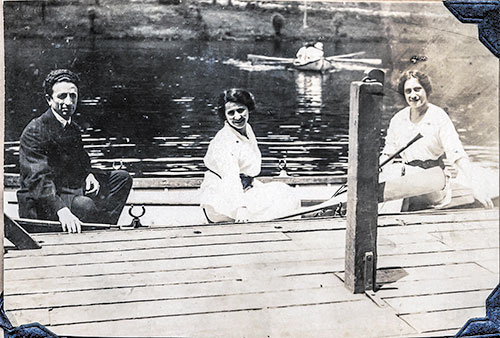 David Taffet’s grandparents, Harry, left, and Fannie, far right, with a friend during their honeymoon in 1913.

Why? Who knows. Ukraine posed no threat to Russia.

Maybe it was nothing more than Putin doesn’t want Ukraine’s thriving economy there on his border. Maybe he wants to drag the rest of the world down to Russia’s level.

But whatever his reasons and whatever the outcome, Putin has accomplished one thing for sure: I’m claiming my half-Austro-Hungarian-Romanian-Polish-Ukrainian roots.

And if you can help, please claim your friend-of-Ukraine and friend-of-a-half-Ukrainian-writer-from-Dallas roots.

While the idea that somebody here in North Texas can do anything to actually have an impact, the fact is there are a number of simple ways you help.

According to Time magazine, most large international aid organizations are working in Ukraine and neighboring countries. Agencies you can give to where your donations will benefit Ukraine and refugees fleeing the fighting include: UNICEF, the UN Refugee Agency (UNHCR), The International Committee of the Red Cross, Doctors Without Borders and the International Rescue Committee. CBS News suggests donations to CARE, Sunflower of Peace and Voices of Children.

AirBnB users have come up with an interesting and creative way to help. Book an AirBnB in Ukraine. Be sure to book at a privately-owned property rather than a corporate property. Pay for the reservation but indicate that you will not be using it. AirBnB will waive all fees so all money goes to the property owner themselves — folks who need that money now more than ever.

AirBnB as a company is doing its part also, opening its properties there to refugees fleeing the fighting, and many private owners are doing the same. The company has also stopped doing any business in Russia.

According to CNBC, cryptocurrency donations totaling more than $50 million have poured into Ukraine. Donations have also come in the form of non-fungible tokens and stablecoins. (Hopefully, Ukrainians know what all that even means. I have no idea.)

A Netflix founder made a $1 million donation to Razom, a Ukrainian non-profit organization trying to acquire medical equipment to treat war-related injuries. And in response to Ukrainian President Volodymyr Zelensky’s response to safe passage out of the country that he needed “ammunition, not a ride,” an Arizona arms manufacturer called Ammo is sending ammunition instead of a cash donation. (I’m not sure individuals can do that.)

Actors Ashton Kutcher and Ukrainian-born Mila Kunis, who have been married since 2015, pledged to match up to $3 million in donations for refugees with their “Stand With Ukraine” GoFundMe page.

From this half-Ukrainian, I ask our community to stand with Ukraine against unprovoked aggression. Today, regardless of where you or your ancestors came from, we are all Ukranian.