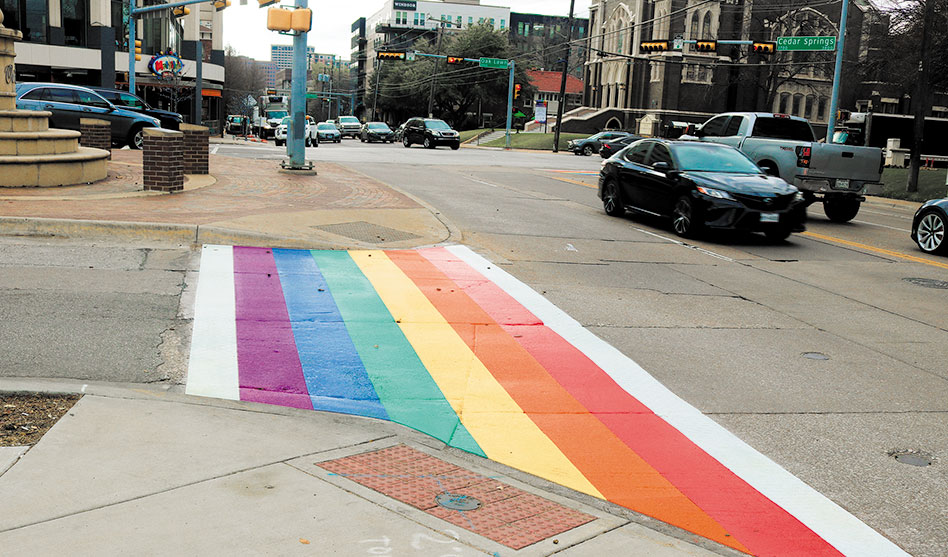 The first of the rainbow crosswalks was installed on Cedar Springs Road. (David Taffet/Dallas Voice)

When the project is completed in a couple of months, Cedar Springs will have gateway signs and 10 rainbows

The first rainbow crosswalks were installed on Cedar Springs Road this week, as construction at the intersection with Oak Lawn Avenue was completed. An additional feature is set to be added near that intersection — a gateway monument — but that won’t interfere with the crosswalks.

North Texas LGBT Chamber of Commerce CEO Tony Vedda, who has been involved with the design of the street improvements and whose organization will maintain the crosswalks, said “monument” is really the wrong word; it’s actually gateway signage.

Two signs will be placed — one in the new, widened median on Oak Lawn Avenue near the Legacy of Love monument, and one in the median near Kroger.

A total of 10 rainbow crosswalks will be installed on Cedar Springs Road between Douglas and Oak Lawn avenues, but the additional crosswalks won’t be installed until other construction is complete at those intersections. 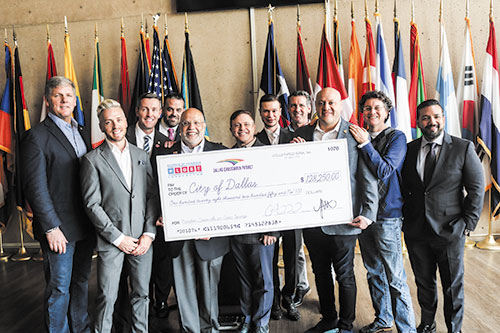 the community presented the city a check for $128,250 to pay for the crosswalks.

The crosswalks are made of thermoplastic, Vedda said, explaining the process: The stripes are glued to the pavement or asphalt, and then heat is applied to make the strips permanently adhere. He said thermoplastic will last longer than paint.

The Oak Lawn crosswalks look like they’re painted, unlike the one on McKinney Avenue near West Village. That Uptown crosswalk looks like a plastic floor covering and gets slick in the rain.

The plastic used on Cedar Springs Road affects available color choices, which is why the green in the crosswalks is not the more familiar bright Kelly green in the rainbow flag. Vedda said had the crosswalks been painted, they would have had a wider choice of colors to select from, because the paint could have been custom mixed. Instead, Vedda said, the city had to choose from colors available from the manufacturer of the thermoplastic product being used.

The cost of installing the rainbow crosswalks is being funded by private donations. The committee that raised the money presented a check for $128,250 to the city by on Feb. 12. Former Mayor Pro Tem Chris Luna spearheaded the fundraising effort.

Maintenance of the crosswalks will also be paid for with private funding raised by the North Texas LGBT Chamber of Commerce. Lighting for the gateway signage will be maintained by the Cedar Springs Merchants Association with private funding as well.
Other upgrades to the street are being paid for with city bond money, including a new traffic signal at Knight Street, where there have been several fatal accidents over the years. Other upgrades include landscaping, sidewalk repairs, a new plaza in front of Hunky’s and bump-outs.

The plaza on Cedar Springs Road at Throckmorton takes away three parking spaces that were not up to code. Those spaces are replaced by four new spaces next to Hunky’s along Throckmorton Street.

The bump-outs narrow the street to make crossing on foot safer. But they have also made it harder for drivers to turn and are being redesigned. Also being redesigned are the sidewalk ramps at Throckmorton and Cedar Springs. Vedda said they were laid out poorly, and, he added, he’s not sure what they will eventually look like.

“They’re still working on that,” he said.

Construction is expected to continue through April, with the additional rainbow crosswalks added as each intersection is completed.