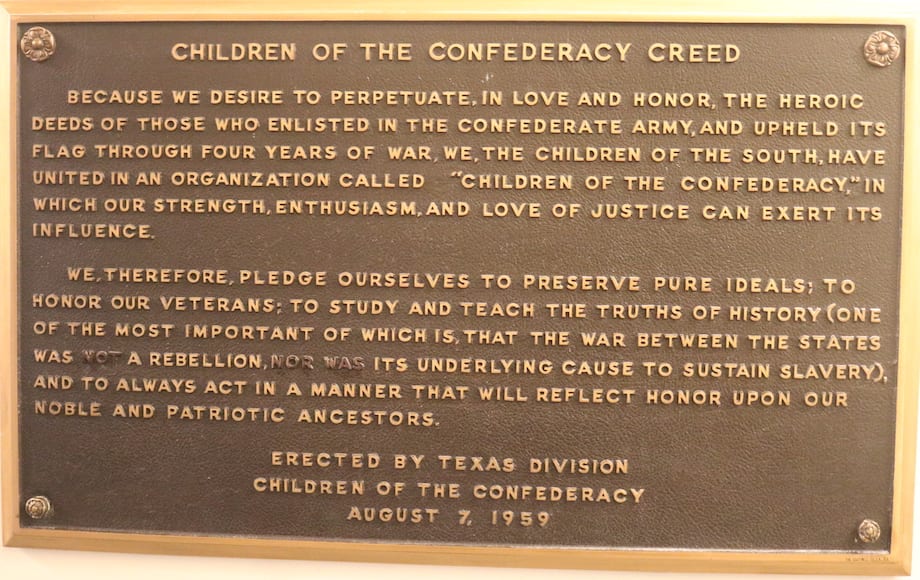 I was in the Texas Capitol last week to pick up my House of Representatives press pass and didn’t notice anything changed about the Children of the Confederacy Creed plaque until I got home.

The marker is the one state Rep. Eric Johnson has been campaigning to get removed since his office was moved nearby two years ago. So this session, he’s moved again — this time to the office of former Texas State Comptroller and Confederate soldier Robert Love, who was assassinated in his office. But, hey, with his seniority up to No. 38, he gets a corner office.

And meanwhile, his favorite plaque remains hanging on the wall down the hall. But the plaque seems to have been altered. Using a marker, three words have been blacked out: “not” and “nor was” to correct the historical error.

So while he didn’t completely win, Johnson’s pet Children of the Confederacy plaque stands corrected.

I’d suggest another change, however. Since “the war between the states” wasn’t a “rebellion,” maybe we should change the name of the event on the marker. How about we call it what it really was. It wasn’t a war or rebellion and it wasn’t about slavery. Let’s just refer to it as “that period of great unpleasantness.” So much more polite.