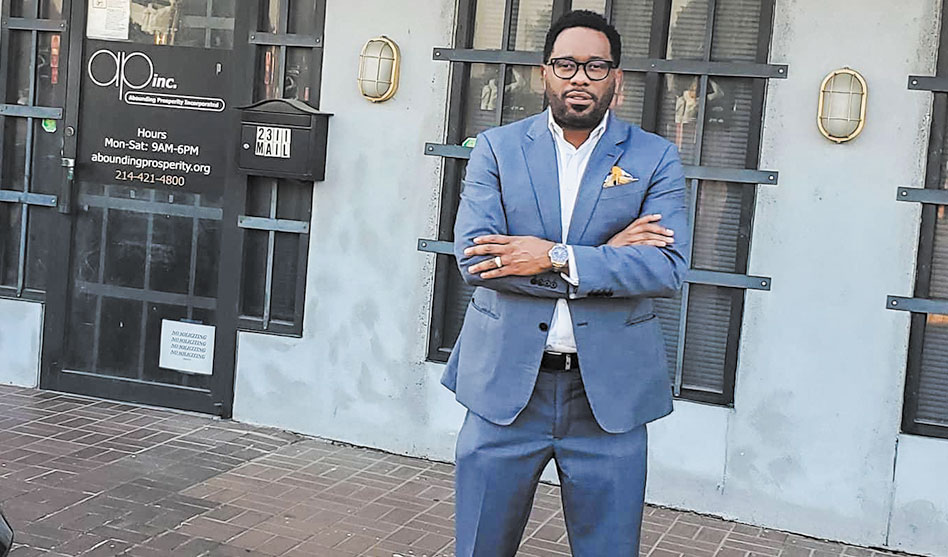 Kirk Myers said that in the beginning, his work in the HIV/AIDS and LGBTQ communities was purely personal. “My advocacy started with my own HIV diagnosis and with saving my own life,” he explained. “After I was diagnosed in 1998, I started looking for safe and affirming spaces for people that look like me. There were programs out there, but programs where no one looked like me was a problem for me.”

Myers said he started out as a volunteer with AIN — known back then as AIDS Interfaith Network — and then went on to work for an organization called Renaissance III, which offered HIV/AIDS services and programs targeted for the Black community. Then in November 2005, he founded Abounding Prosperity, Inc.

Since then, Myers has also taken over as lead organizer for Dallas Southern Pride as well.

“As I became more empowered myself, I wanted to empower others,” Myers said, explaining why he went to work for Renaissance III and then founded Abounding Prosperity. He wanted to make sure that the Black HIV/AIDS community had access to the services and programs they needed. But he always wanted to work on “social justice issues and making sure things were equitable,” as well. 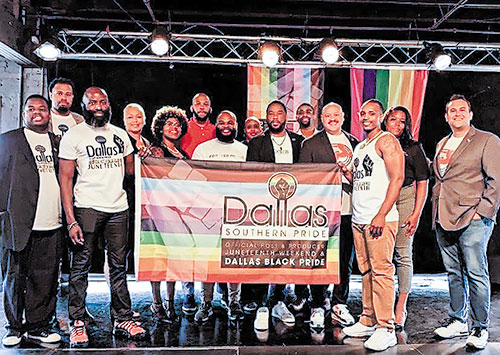 “In our community we need to work first on educating people internally, with our families, and then we can think about working externally with other communities,” he said.

Myers used his own family as an example. “My mother was a typical Black southern woman,” he said. “She did not want a gay son. Still, I was one of the lucky ones. I did contract HIV, but I was not homeless, and I was not involved in drugs. And over time, our relationship evolved, and my mother ended up founding this organization [Abounding Prosperity] with me.”

Many other Black LGBTQ folks, however, aren’t as lucky. “Their families aren’t accepting. Then you throw in HIV on top of that, and then you throw in racism, and it can be very difficult,” he said. “We

are battling racism and homophobia; Black gay people are doubly attacked.”
As an example, Myers pointed to the larger LGBTQ community’s battle over the last decade-plus to secure equal marriage rights. “Black folks had basic needs to be concerned with — housing, employment. I don’t have time to worry about not being able to be legally married if I am worried about not being accepted by my family and not being able to get a job and not having somewhere to live,” he said.

“Black gay and trans people are still dying from HIV in disproportionate numbers. Then there’s police brutality against Blacks, and homophobia even from within the larger LGBTQ community,” he continued. “With all that, how are we supposed to have time to get involved in voter registration drives, but then, I can’t be politically involved if I can’t even get registered to vote.”

“As lead organizer for Dallas Southern Pride, it’s not my intent to segregate the communities,” Myers continued. “I consider my work, all of what I do, to be a bridge between communities. But there is work we have to do at home, first.

“It’s like they say: Charity does start at home. And God bless the child who has his own,” Myers said.

While the last 12-plus months have been difficult to navigate, Myers said he believes that Abounding Prosperity and, now, the return of Dallas Southern Pride events like the Juneteenth Unity Weekend have rallied the Black LGBTQ community, bringing people together to find ways to extend help to those who need it.

“We have fed the community,” he said. “We have provided COVID resources and referrals. We have handed out COVID prevention kits and, for those who fell ill, COVID care kits. We kept our facilities open so people can still get their medications for HIV/AIDS. Those are things that have grown out of our own desire to live. It started as just surviving, but now, it’s not just surviving, it’s thriving.”

Surviving and thriving in the face of adversity is something the Black community has been doing throughout this country’s history. In fact, Myers said, the Juneteenth celebration is an example of taking an adverse situation — slaves in Texas not learning they had been freed for two years — and turning it around and making it a cause to celebrate.”

Even as the Black LGBTQ community celebrates Juneteenth, Myers said, he hasn’t lost focus on the need to build bridges between his community and the larger LGBTQ community. But how do we bridge the gap?

“It starts,” he said, “with conversations and with taking the time to reach a hand across the aisle. Our fear of our differences so often keeps us incapacitated. But we have to move past the fear and realize that a win for one of us is a win for all of us.”

Myers said that he as an individual and Abounding Prosperity and Dallas Southern Pride as organizations were glad to be able to work with city officials, including Mayor Pro Tem Adam Medrano, on ceremonies to raise the Dallas LGBTQ Pride flag at both Love Field and at Dallas Police headquarters. The one at the police station was especially symbolic, he said, because of the murders of Black trans women in Dallas and the issues of police brutality against Black people that have plagued the country.

That’s one example of bridging gaps. But there is more work to do. And the key word in that work, Myers said, is intersectionality.

“We have to acknowledge and accept our differences. But we also have to focus on our points of commonality,” he said. “We have to be talking about what brings us together instead of what divides us, and we have to find where we can move forward together.

“Often times, if only indirectly, [Black LGBTQ people] are being asked to integrate themselves into the larger LGBTQ community. They ask us to assimilate, but they are not willing to cross-assimilate,” he continued. “But the thing is, I am not just gay. I am Black and gay. And because of that, I don’t give a damn how gay I am, I don’t have the same privilege as a white gay man.”

And that is also key: acknowledging and understanding privilege, and knowing how to use it for everyone’s benefit.

“What we have to do is acknowledge that privilege and find out how each of us can leverage the access and privilege and power that we have to the betterment of other marginalized groups,” Myers said. “We have to understand that there is enough freedom to go around. We all deserve to live and to love freely.” 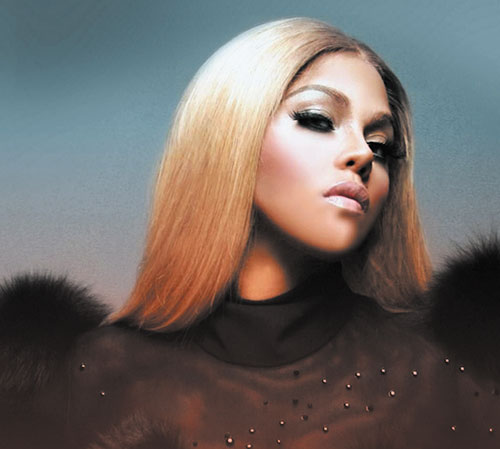 After a year-long hiatus forced, of course, by the COVID-19 pandemic, Dallas Southern Pride is back with the Juneteenth Unity Weekend celebration. And DSP’s lead organizer, Kirk Myers, is promising it will be a weekend to remember.

“We have a whole host of events, from parties to health-related events and more,” Myers said. “We’ll be doing HIV testing for tickets, COVID vaccines for tickets. It will be amazing.”

The weekend kicked off Thursday night, June 17, with a rooftop party honoring Dallas Mayor Pro Tem Adam Medrano at the new Tru by Hilton Dallas Downtown Market Center. But things kick into high gear tonight when DSP “takes over the Sheraton Market Center,” the host hotel, for a welcome party from 7-10 p.m. “This is the first time to completely take over the Sheraton, our host hotel, and we have already sold out all the rooms there, and we have two overflow hotels!” Myers said.

Another first, he said, is that “they are lighting up the city in the Juneteenth colors — black, green and red,” similar to the weekend of Dallas Pride when the Dallas skyline was aglow with the rainbow colors. “This weekend, it will be lit up with the Black Pride colors. They lit it up for Pride, and they are lighting it up again for Black Pride.”

DSP is also working with the Arts District Pride Party+ events happening this weekend, and Abounding Prosperity will be offering health screenings from 11 a.m.-1 p.m. Saturday, June 19, at the Dallas Museum of Art, 1717 N. Harwood.

Saturday afternoon is all about the Juneteenth Unity Weekend Pool Party, from 4-9 p.m., featuring none other than the award-winning and multi-platinum rapper Lil Kim. Then everyone dries off from the pool and heads over to Gilley’s Dallas, 1135 Botham Jean Blvd., for the Juneteenth Ultimate Mega Party from 10 p.m.-3 a.m. Hosted by Rick Ross, the party features performances by Kash Doll and music by DJ Lo Down Loretta Brown — aka Erykah Badu.

The weekend winds up on Sunday, starting early-early (or late-late, depending on your point of view) with the Juneteenth Unity Weekend Ball: The Emancipation Black and Gold, from 2 a.m.-6 p.m. at 179 Parkhouse (179 Parkhouse St.), hosted by GC Father Shemar Garcon. Trophies will be awarded in Virgin, Fashion, Performance, Sex Siren, Realness, Body and Face categories.

After a quick sleep break, things start up again with the Kirk Myers Signature Brunch birthday celebration at the Sheraton Suites Market Center from 1-4 p.m., with special performances by Kennedy Davenport and Tamika X.

The Distinguished Gentlemen of KKMS present Emancipation Sunday Funday, at Bar 3606 and OT Tavern, 3606 Greenville Ave., starting at 4 p.m., and the StreetDallas Juneteenth party, at Area 111, 111 Oak Lawn Ave. in the Design District, wraps up the weekend.

For details on each event and to purchase tickets, visit DallasSouthernPride.com.