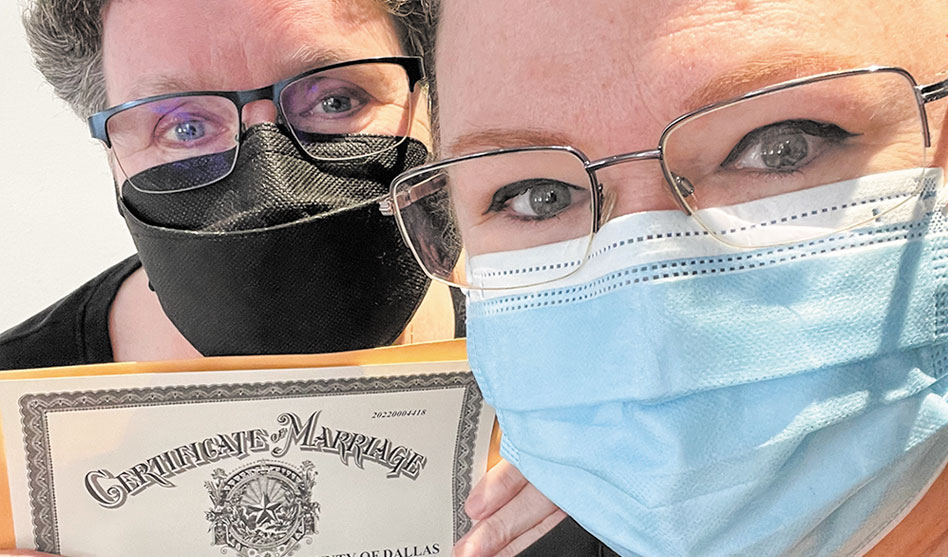 So which name should they use? Hyphenated names become cumbersome. They didn’t want to choose one name or the other. And they didn’t want to give in to the patriarchy that assumes the name passes down through male lineage only.

What they didn’t know when they started the process was this wasn’t a simple case of one spouse taking on the other spouse’s name. This would entail a full — and separate — name change for each of them.

They started the process by going on line and filling out and e-filing the form.

When they didn’t hear back from the court, “we opted to walk it through in person,” Cathy said.

What should have been a 20-minute process turned into more than three hours. Instead of the one form they already filed and were now filing in person, an additional form was needed — Affidavit for Prove-Up as well as Order for Name Change. And they’d need to be fingerprinted as part of their background check. Fingerprints had to be sent to Austin.

With paperwork filed, they were assigned courts — yes each women would have to appear separately in different courts in order to form one family.

This week, a five-week wait or more begins checking their backgrounds to assure the courts the two women aren’t changing their names to avoid debt or criminal prosecution.

They were told to check back with the court to set hearing dates. No, the court won’t contact them first.

Once the court hears back from Austin, each woman will have a separate hearing and hopefully be given “the orders” that officially changes their names.

We wish them luck.