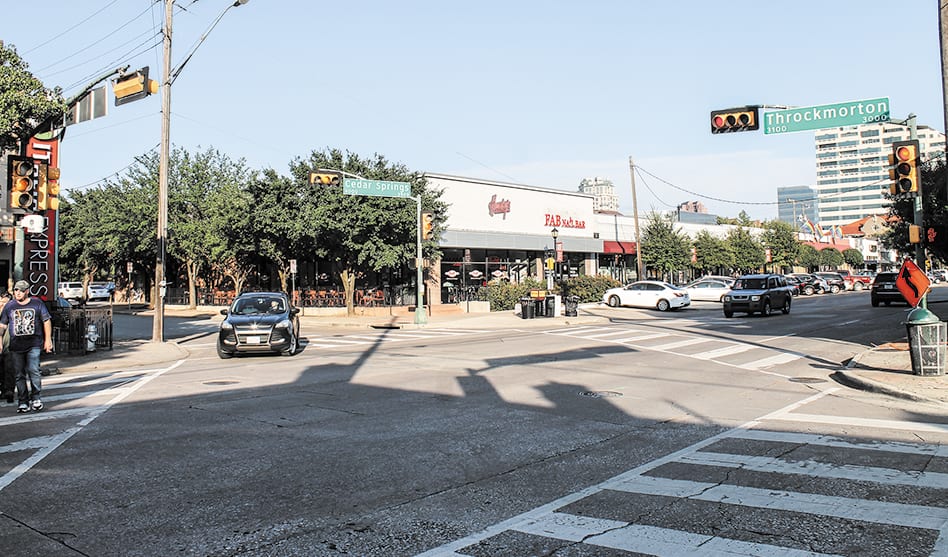 Four rainbow crosswalks will be installed at the corner of Cedar Springs Road and Throckmorton. (David Taffet/Dallas Voice)

The Dallas City Council voted on Wednesday, June 26, to approve a plan for 10 rainbow crosswalks and other upgrades to Cedar Springs Road.

Former Councilmembers Pauline Medrano and Angela Hunt gave portions of their allotment from a bond election to upgrade the LGBT entertainment district. Since then, designs have been drawn up, argued, turned down, redrawn and refined.

This week two proposals passed the Dallas City Council on the consent agenda. One proposal includes most of the streetscape improvements and markers. The other is for crosswalks that will be paid for privately.

The cost of installing 10 rainbow crosswalks will be $128,250. Former Dallas City Councilman Chris Luna is spearheading the fundraising and has already raised $70,000 toward the project. His goal is to raise $160,000, which would include funds for maintenance.

Among the funders so far are the Cedar Springs Merchants Association, Round-Up owners Alan Pierce and Gary Miller as well as the bar itself, The Dallas Foundation and Communities Foundation of Texas. Dallas Pride, Texas Instruments, Lisa K. Simmons and Luna are the other major donors.

Next are four crosswalks at Throckmorton, an intersection also known as the Crossroads. One crosswalk will cross at Reagan in front of Cafe Brazil.

Finally, one crosswalk marking the beginning of the district will be painted at the monument crossing to the Melrose Hotel.

The additional three crosswalks at that intersection will be realigned. From the monument to the Centrum, the crossing will be perpendicular making the walk shorter and pushing stopped traffic on Oak Lawn Avenue back a bit. Those will be painted in white.

Luna said that once construction begins — current projected start date is September — the project is expected to take six months. Crosswalks will be the last thing done. That’s so that other construction doesn’t destroy the newly- painted walkways and so utility companies have time to get any expected underground work done first.

The North Texas Chamber of Commerce will be responsible for the maintenance. Money raised for the project above the initial cost will be held by the Chamber.

Vandalism and utility work have been problems for rainbow crosswalks in other cities. Within a year of Atlanta installing its $196,000, one-intersection rainbow crosswalks, underground AT&T utility work cut right through one lane of the walk and was replace with blacktop. The city is looking into replacing the rainbow.

In Toronto, two people painted black swastikas over its four-year-old painted crosswalk last August. The crosswalk was quickly cleaned up because the paint used in Toronto is actually a long-lasting plastic laminate that will also be used on the Cedar Springs Road crosswalks, according to Luna.

A payment of $125,250 is due from the North Texas GLBT Chamber of Commerce by Jan. 31, 2020 to the city of Dallas. If payment in full is not received, the rainbow crosswalks will be deleted from the contract and the street enhancements and will not be installed.

Luna said he didn’t think there would be a problem raising the additional funds. He said a number of companies that are likely to contribute haven’t been contacted yet and a Fundrazr campaign has just been launched.

In Atlanta, a GoFundMe raised about $45,000 toward its much-higher costs.

The cost of additional street improvements coming from bond money is $1,247,485.16. According to the plan voted on by the Dallas City Council on Wednesday, that money will be used for “landscaping, barrier-free ramps, continental style crosswalks, decorative paving, traffic signal design, pocket park plaza, gateway treatment and neighborhood signs at Douglas Avenue and Oak Lawn Avenue.”

Bidding on the contract has closed. Four contractors submitted bids and Gibson & Associates of Balch Springs won, coming in at the amount allocated for the project. The highest bid would have cost more than $2 million.

Gibson is expected to begin work in September and complete construction in March 2020.

Since the parade was moved off the Strip this year, the only other street event that may be affected is Halloween on Cedar Springs Road.