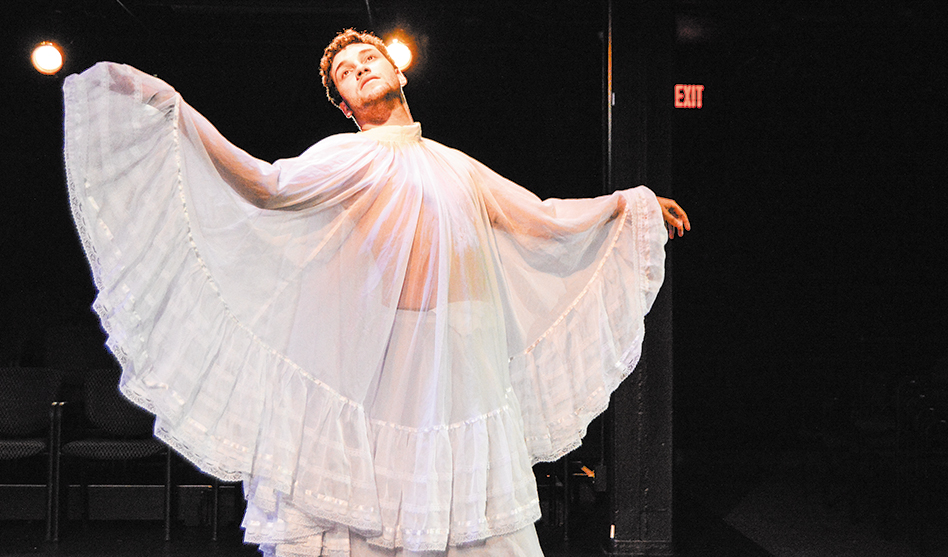 Colby Calhoun, a mixed-race non-gender-conforming theater artist,
created a show reflecting such diversity for the recent Festival of Independent Theatres.

Ask any North Texas actor or other creative of a marginalized population — whether defined by race/ethnicity, sexual orientation, gender identity/expression, physical ability, body type or age — the number of times they’ve looked at casting or job postings from professional and community theaters and seen some variation on a familiar phrase: “Looking for all ethnicities, ages and types.” They would certainly answer “countless.”

And then they would explain how too often that is mere boilerplate — lip-service to an ideal, but not the reality. They know the theaters that truly mean it as opposed to the ones only doing it for legal optics.

“We talk to each other,” says Denise Lee, a popular performer in Dallas-Fort Worth who, for three years, has led a series called Community Conversations that addresses topics such as race, ethnicity and white privilege. Earlier this year, at an invitation-only conversation with artistic directors, directors and others in leadership positions in the DFW theater scene, Lee, who is African-American, made it clear that “we know which theaters not to even bother auditioning for.”

It’s a multi-layered conversation, not only here but in theaters across the country, not to mention in Hollywood and on Broadway, that reaches beyond Facebook flame-wars and sometimes necessary public (read: social media) shaming.

All of the artists interviewed for this story agree that, in North Texas, there have been improvements in the past five years or so, but more change is needed, even in a post-Hamilton/post-Pose world… or, to scale it on a local level, even after the Dallas Theater Center — our biggest theater and largest employer of theater artists — won the 2017 Regional Theater Tony Award, in part, because of artistic director Kevin Moriarty’s growing commitment to equity, diversion and inclusion on stage and within the institution.

After last weekend’s performance Public Works Dallas production of Shakespeare’s As You Like It, in which five professional actors shared the stage with about 200 community members representing what our community truly looks like, local Latina director Christina Vela posted on Facebook: “…there was a moment when I was watching Chris Ramirez as Orlando and Tiffany DeSena as Rosalind … wherein I felt like a kid again, giddy and proud and hopeful, and it mattered so much to me to see two professional actors who look like me leading this incredible ensemble in a professional Shakespeare production at a major LORT theater. If I, a crusty old broad who’s been doing this for a ‘few’ years, felt that way, imagine what it’s like for all the little brown boys and girls on stage working with them every night?”

In 2008, Dallas-based actor Monalisa Amidar, who identifies as Filipino-Texan, founded Diwa Theater Company with the intent of showcasing North Texas’ Asian-Pacific Islander (API) theater community. The group produced one show at WaterTower Theatre’s Out of the Loop Fringe Festival, but for a number of reasons (one being the amount of work involved with running and growing a theater company) Diwa folded. Amidar has remained a part of the theater scene as an actor and director. In August 2018, she started a Facebook group, DFW Asian Pacific American Creatives, consisting of Asian- and American-born API artists. The group now has about 170 members. It’s one of the reasons that Imprint Theatreworks’ current production of Leah Nanako Winkler’s Kentucky was able to cast seven roles in this story about a Japanese-American family living in the bluegrass state with API actors.

In a July column on TheaterJones.com, Imprint’s artist director Ashley H. White wrote about responsible casting, and of the Kentucky auditions: “DFW’s large community of API artists responded to the call. Turnout for our auditions was overwhelming, introducing us to countless new faces and a whole catalog of artists wanting to share in telling this story.”

That’s a theme that emerges over and over again when talking to artists from marginalized communities. There are plenty of stories to tell, but that doesn’t mean that those stories should be the only reason to cast artists of color — any given theater’s token one-per-season play written by a person of color and/or queer person shouldn’t be the only time the theater actively searches for artists from those groups.

“I don’t want to be considered only for API-specific roles. I’ve been fortunate to have worked with innovative and progressive theatre companies who’ve cast me and made nontraditional casting decisions,” Amidar says. “I believe in color-conscious casting where an artist’s ethnicity is seen as an asset that enriches not only the role but the overall creative process.”

It also doesn’t mean that API roles can be cast with non-API actors. “Yellowface” has been an all too common occurrence in theater, certainly going back to the age of operetta and such musicals as Rodgers+Hammerstein’s problematic Flower Drum Song. Notably, when Miss Saigon debuted in London, actor Jonathan Pryce was controversially cast in the role of the Engineer, a half-Vietnamese character. Those kinds of casting mistakes are being taken seriously. In 2016, after an outcry when Dallas Summer Musicals cast a white man as the King in The King and I, leadership recast the role with an API actor. Protests don’t always work, though. A few years ago, Lyric Stage was the topic of controversy when it cast a white man in the lead role of Quanah Parker in a musical about the Comanche chief. In 2018, a similar outcry occurred when a large-budget, professional theater in St. Louis cast white actors as Asian characters in a revival of Jerome Robbins’ Broadway.

The importance of responsible casting is echoed by Seth Johnson and Olivia Grace Murphy, who co-founded Flexible Grey Theatre Company in 2018 to address the needs of marginalized artists and writers. They also host a monthly podcast, in conjunction with TheaterJones, called TeaTalks, in which they have conversations on these issues (topics have included nonbinary and API artists and women directors). In its shows, the group has drawn from the local community of queer, trans and nonbinary artists and/or artists of color.

That topic becomes thorny when talking about roles for cisgender lesbians and gay men, because “gayness” is not necessarily something that can be identified just by visual appearance, as opposed to people of color or, in some cases, transgender and non-binary people.

Many artists — even persons of color and LGBT directors and actors — will argue that in these cases, it comes down to acting. There’s a long history of straight women playing lesbians and straight men playing gay men — it has even won Oscars for Charlize Theron and Tom Hanks, for instance.
Johnson sees it from another standpoint.

“It goes back to the authenticity of the story you’re trying to tell,” he says. “If you’re trying to tell a gay story that is specially written that way, and you have that community auditioning for you, I don’t understand why you wouldn’t pick somebody who’s not engrained in that culture. I think casting consciously with sexual orientation in mind is important, because our stories are unique, and you might be a wonderful ally and understand the community, but you’re never going to experience what we’ve gone through.”

“I just did Newsies [at Lyric Theatre of Oklahoma] and [Joseph] Pulitzer was played by a black man,” notes Lee. “Some people thought that was too much, because he was a real man; but in my opinion, this wasn’t a story about him, and it wasn’t about his life. We have to look at the context of the show.” Explaining further, Lee says, “Billie Holiday can’t be played by a white woman, that changes her whole experience. … Anne Frank could not be black, in my opinion. Just like Dr. King can’t be white [in works about their stories].”

“Actors think ‘I should be able to act anything,’” adds Murphy, “but they forget the idea that acting is storytelling, and not everyone is equipped to tell every story.”

Colby Calhoun, a mixed-race dancer and actor who identifies as queer and gender-nonconforming and uses they/them or she/her pronouns, says that this issue of responsible casting has to go to the top of an organization.

“I think it starts with leadership,” Calhoun says. “Putting people behind the table that represent people like me or people similar to me, it makes us more comfortable when auditioning. If there’s a person of color on the artistic team, that gives me hope that I’m getting seen.

Calhoun, who has been a member of Danielle Georgiou Dance Group for four years, created a new work, 1st Annual Gay Show, that was performed at the most recent Festival of Independent Theatres. The piece was devised specifically for queer artists of color, and the cast featured Calhoun and four queer, transgender or non-binary Latinx, black and API performers. “I wanted a place to tell stories for people of color that were defiant in a way, because often when talking about queer representation for people of color or queer people of color, it feels like tokenization.”

Within North Texas theater, there are a number of culturally specific groups: Jubilee Theatre, Soul Rep Theatre and African American Repertory Theater (all highlighting the black experience); Teatro Dallas, Cara Mía Theatre Company and Teatro Flor Candela (Latinx theaters); Uptown Players and Flexible Grey (LGBT); Echo Theatre, which only produces work by women playwrights (and is expanding that to female-identifying writers); and One Thirty Productions, which caters to a demographic we too often forget about: the elderly and people of retirement age. There are also a number of programs, such as Starcatchers in Plano (affiliated with North Texas Performing Arts) and the sensory-friendly performances at Dallas Children’s Theater, that program for differently-abled and neurodivergent artists and audiences.

Of the non-culturally specific organizations that have full repertory seasons and are clamoring to find their way into the community engagement conversation, there have been notable examples of truly diverse casting, such as Dallas Theater Center’s color-conscious production of Les Miserables and its revival of Inherit the Wind that was cast without regard to color or gender. Works on transgender themes and using transgender or non-binary performers have been produced by Uptown Players (Harbor), Stage West (Hir), Second Thought Theatre (A Kid Like Jake and Straight White Men), Bishop Arts Theatre Center (In the Tall Grass) and Circle Theatre (Men on Boats), to name a few.

In 2020, Imprint Theatreworks will produce a musical called Southern Comfort, which is about five transgender people in a small town. “We are, once again, committed to casting this show responsibly. Do I know five transgender artists off the top of my head? I do not, but I look forward to meeting, seeing and creating with them,” White wrote in the aforementioned column.

To Amidar, it’s vital that North Texas theaters find ways to find artists from marginalized communities, beyond simply posting online casting notices in the usual places, such as audition sites and digital callboards.

Speaking as a member of the API community, she adds: “There is a wealth of talent, heart and potential within the API artistic community… Nothing makes me happier than seeing fellow API artists thrive. To non-API colleagues — if in doubt, reach out, consult and ask questions. Best of all, let’s collaborate!”

Mark Lowry is the executive editor of the non-profit Metropolitan Arts Media, which runs the website TheaterJones.com.