Having fun on The Strip (and in bed)

Hello and good tidings. These past few weeks I have, for one reason or another, gone out quite a few times on Wednesdays and Thursdays. Those are usually my days off, and I try not to leave my little corner of the world if I don’t have to. I learned something going out on those week nights: You can have a lot of fun. There is actually quite a lot to do on The Strip.

A few Wednesdays ago, Kylee O’Hara Fatal asked if I would be a guest judge for her Queer Off show. It is a Drag Race-style show but way more inclusive. The competition is open to everybody. There were drag kings and drag queens, male, female and non-binary. And before you say anything about the female-born drag queens, STFU … seriously, their drag goes harder than most male-born drag queens. Those gals wear full wigs, pads and some absolutely sickening makeup. There is a lot those “boys” can learn from those “girls.”

I know a lot of y’all don’t get the females that do drag, but times they are a-changin’. I’ve heard people complain about ‘why do they dress up’, as they are already women? Bitch, please … drag has evolved so much that drag nowadays looks nothing like a real woman but instead a hyper-stylized version of glamour, and I’m here for it. I honestly would rather see a female drag queen that kills it than a male drag queen stand there in a gown. For me it is all about entertainment value. 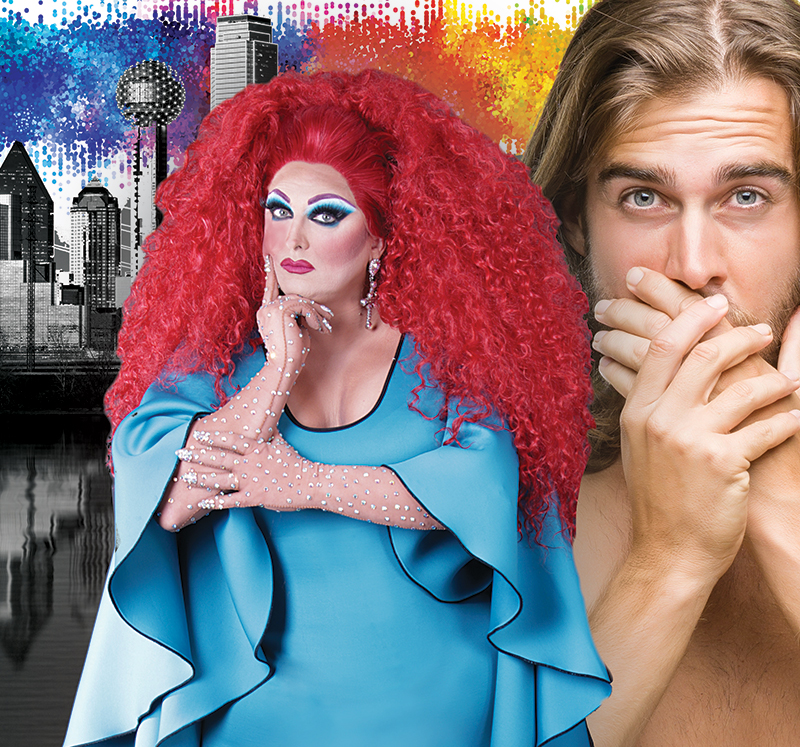 I know my history — I know that it was drag queens and trans women that started the entire gay movement, and I’ve heard people say that they will never understand the struggle we have gone through as gays. But that’s just it: Most of the female drag queens are queer. But even if they are not, I welcome them. There is room for everyone at my table. There is so much divisiveness these days that anything that brings people together I can support. OMG! I didn’t mean to go on such a rant, but I thought it was important to say.

Anyhoo, I had such a blast that Wednesday night. The Queer Off at Sue Ellen’s is a great show. Those young entertainers put so much into that show. That week’s theme was cartoon characters, and they had just about every character you could think of Velma from Scooby Doo, the three-eyed green alien from Toy Story 2, Him from The Powerpuff Girls, Helga from Hey, Arnold! and so much more.

They were creative and inspiring. As an older drag queen, it is easy for me to fall into a rut and get complacent with my looks, but that night truly inspired me to try some new things.

That same night, my friends and I headed over to TMC to see Sasha Andrews’ Fuego show. It is a Latin-themed dance competition. Lots of cute boys and the place is really hoppin’ since the remodel. It has such a cool vibe, and if you are out on a Wednesday, you are serious about your partying. We had a blast.

We ended the night at the Round-Up. I always have such a great time over there. Plus, the eye candy is more my type of viewing. I do love a cowboy with a bubble butt. I was surprised at how much fun can be had on just a random Wednesday.

Find a reason to take off on a Thursday and take your ass out on a Wednesday; you won’t be disappointed. Hell, Thursdays are fun, too. But I guess if you have the right friends, you can have fun at an insurance seminar.
Now let’s help some friends and answer an email I recently received.

Dear Cassie, Would you like to increase the size of your penis?
Whoops, wrong email!

Hi Cassie, I have something weighing on my mind lately. I’m 33. My first serious boyfriend was the one I lost my V card to when I was 21. I exclusively bottomed for him for the years we were together. Now that I’ve been single for the better part of a decade, I’ve continued being a bottom when I have a hookup, and now I feel like it’s too late to learn how to top just using one-night stands. It’s made me increasingly nervous as time goes on. What hasn’t helped is that I haven’t had a boyfriend in five or six years. How do I break in? Am I type-cast? Am I being too neurotic? Not sure how to move forward from here. Thanks for any advice you may have. Signed, a Topsie Bottom!

Seriously, I think I have a plan for you. Once you put it out there that you want to top, I think you will be very popular. If you are using Grindr or the other apps, tell the bottoms out there that you are new to topping and that you want to get better at it. Ask them if they can help you get better. I don’t know of any self-respecting butt boy that wouldn’t jump at the opportunity. Gouge as many rumps as you can, because practice makes perfect.

I know you are probably not exactly looking to be just some rando dick for the city, but maybe you are. Actually I kind of understand your situation more than you know. When I first came out, I was only ever a bottom. I liked butt stuff, so I only ever wanted to do that. But as I matured and was in a relationship for a while… you do what you gotta do to keep things fresh, and I learned I liked topping, too.

I was worried I was no good at it as well, but the great thing about being with someone you love and trust is you can talk about it. Find out what worked and what didn’t. I’m not sure I would have ever even started topping if I wasn’t in a relationship.

You should view this time you are single as a period of self-discovery so that when you meet someone you really like, you have more to offer them as a versatile gay man. I know our sex life is better since we removed the labels about what we were doing and opened ourselves up to do more.

You are not being neurotic; you care. That is important. The fact that you care enough about being good for your partner, even if it is just a hook-up, means you are going to be just fine. Now get out there and get your dick wet… practice, practice, practice!