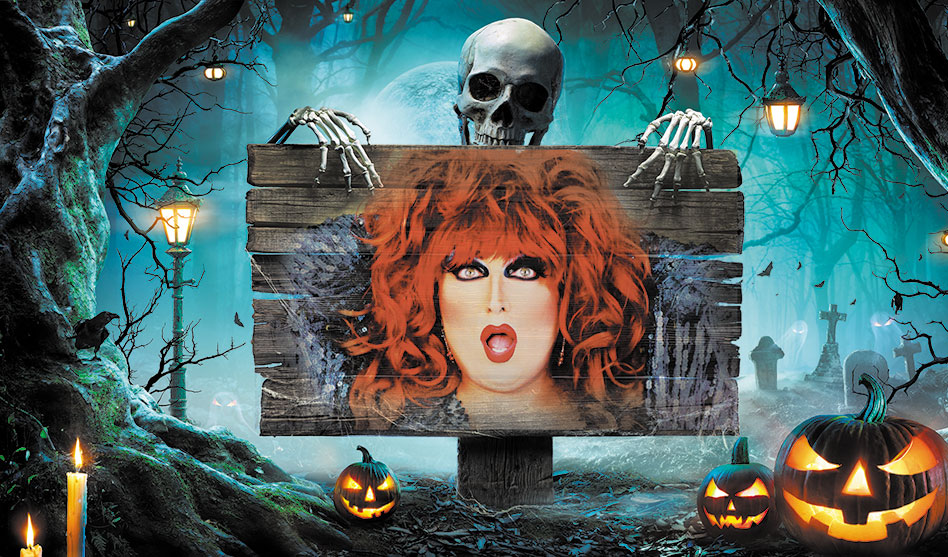 The time of my life

Hello and Happy Halloween to all of you spooky and beautiful people. I hope you are all in the spirit of the holiday … you know, all creepy and shit, taking every chance you get to scare the bejesus out of someone you love or — even better — someone you know is easy to scare.

I am, apparently, a hard person to scare. Every once in a while, someone will make me jump a little with a jump scare, but they never get a huge reaction out of me. Nayda Montana, a lil’ baby drag queen, has an impression she does of me where she acts like someone scares her, and all she does is say, “Mutherfucker!” It’s pretty dead on.

October has to be my favorite month by far. My husband’s birthday is at the beginning of October, so we usually go on vacation to celebrate. This year we went to an all-inclusive, adults-only resort in Mexico and had a fucking blast. I love going on vacation in October: The busy season is over, and kids are back in school, but the weather is still pretty great almost anywhere you go.

There were six of us that went to Mexico — Jamie, me and four of our best friends. We drank … a lot. We ate … a lot. We snorkeled, and it was amazing. I swear I would be in great shape if I had access to go snorkeling every day. We saw two sea turtles; one was freakin’ huge. We saw two stingrays, and all I could do was think of Steve Irwin. I wasn’t scared or anything, but I did shoot Mr. Stingray the middle finger and said a silent “fuck you” to him.

We saw seven squid. They were way cool. They hovered in a line from largest to smallest. The biggest one was as thick as a new roll of paper towels; the smallest was the size of pill bottle. They moved in unison and changed color as we moved closer. Nature is freakin’ amazeballs.

There were so many fish — beautiful fish in every color and shape you can think of. We saw four, let’s call them angelfish because they were the same shape as little angelfish, but these fuckers were huge — like, three feet across. We have snorkeled in Hawaii and Belize, but off of this little beach in Playa del Carmen, we saw the most diverse group of sea life. I highly recommend it.

Jamie and I went to a monkey sanctuary and saw something so wonderful that it brightened my entire day. It was so awesome; I use it to chase away any bad or depressing thoughts I might be having, and it truly uplifts my soul.

So, at the beginning of the tour around the sanctuary, our guide told us a few rules to keep us safe from the animals and the animals safe from us. Well, this blonde bitch is not listening to our guide at all. This C-U-Next-Tuesday is on her phone and talking loudly. Everyone is just kinda rolling our eyes at her. Then at the first enclosure the guide has to tell her to back away, that she was too close. If she had been listening, she would have known that.

One of the cool things that we got to do was go inside an enclosure and hang out with a spider monkey. Our guide did another little quick talk to tell us how to act around the monkey. We had to wash our hands and arms, and we were told to only gently pet the monkey with the back of of hand when she sat on our lap.

They had a photographer there to take pictures you could buy, and all of the money goes to fund the sanctuary. The handler would have the cutest, sweetest little monkey — her name was Rafaella — jump from one person’s shoulder to the next.

You had to sit very still and stay calm.

As Rafaella was sitting on the blonde bitch’s head, looking amazingly adorable, Rafaella pissed on her. Pee ran down the bitch’s face like tears, flowing down into her mouth. I will give Blondie props for not freaking out or even getting mad. She just said, “I guess she likes me.”

That moment will live rent free in my brain forever. Karma, thy name is Rafaella!

The best night of the entire trip was the night we celebrated my husband’s birthday. I made our entire group wear matching outfits consisting of a button-up shirt and a matching pair of shorts — black polka dots and fluorescent pink flamingos on bright white. We were the gayest thing that resort had ever experienced, and I loved every second of it.

We had a lovely dinner, had a few shots of Tequila and took pictures with anybody that asked. And a lot of people asked.

If you didn’t like the song that was playing, or if you saw someone really getting it and wanted to know what they were hearing, you just hit the button on the side of the headphones and switched to the other DJ. It was so much fun!

It was hilarious to take the headphones off and listen to everyone singing, off key and awful — but you could not deny that they were having a blast. We all did. There is something so freeing about everyone not giving a damn if anyone is watching and just dancing.

Jamie and I have been together for almost 20 years, and that was the first time we have ever actually danced together. He’s just not big on dancing, but he was that night. We danced for two solid hours and did not take a single break — well except for stopping to take a few shots of Tequila.

It was truly one of the best nights of my life.