Hello, ya happy group of homos (and a few of you straighties). I hope you are having a fabulous week. I can already tell you that this week’s column is going to be another episode of brain vomit.

Everything I want to write about is depressing or puts me in an immediate bad mood. So, I will be keeping this one lighthearted instead. The world today is so fucking horrible and worrisome that I just don’t want to add to the zeitgeist of sadness.

First off, my fish won’t stop fucking! We have a nice sized aquarium, maybe 35 gallons. A few years ago, we started to add living plants to it because I wanted to get rid of all of the fake-ass plants that look faker than a tan on a showgirl. One of the plants we bought was some kind of sea grass, and within a few months it had taken over the entire aquarium. I love it, everything looks so lush and green. 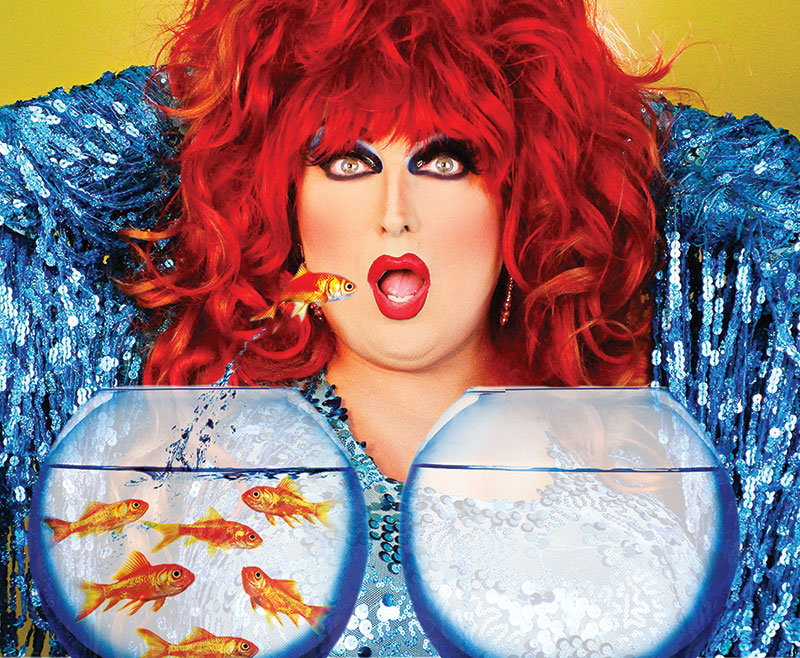 We had about six red, white and blue tetras, three angel fish and about four guppies. We kept that number for over a year even though the guppies kept getting pregnant, growing big and having babies. The fry never lasted too long because one of the other fish would always eat them during the night.

Then, I guess because we had so much sea grass providing a thousand places to hide, the babies started to survive and thrive. At first, we were like, Oh my Gaga! How cool! We got babies!

It was so neat to see them as they grew. It was so obvious which one had fathered which fish; one male had a black iridescent tail while the other male was almost totally orange. We were really enjoying our aquarium, more than we had in years.

I don’t have the heart to just net’em and flush’em. We have a great filtration system and keep up on the aquarium maintenance more than regularly. And no, I don’t wanna get rid of all of the plants. I love the way it looks.

So, after a little research I found that there are predatory critters I can get that will hopefully eat the fry while they are tiny and help regulate the overpopulation of guppies. We bought a couple of these catfish-type bottom dwellers and a couple of African dwarf frogs. Lord, I am hoping those little fuckers eat their fill of baby guppies, otherwise I am going to have to make some tough decisions.

Do they have a Plan B pill for guppies? If them damn boys would just keep their fishdicks in their pants!

If anyone has any suggestions on what to do about these fucking fish, lemme know. Or if anyone near Midlothian wants a buncha fish for their aquarium, call me. I will peddle these fish like a drug dealer. “Yo, you looking for some shit? I got guppies, all kinds; whatchu looking for? Fishies, Fishies, Fishies! I got black fishies; I got orange fishies; I got black-and-orange fishies. Gay fishies, fishies in fishnets, fat fishies, skinny fishies, one-eyed fishies, dom-top fishies. Whatever you want, I got! Freak fishies, nerd fishies …

Next subject: Y’all, I can’t tell you how good it feels to unfriend and block people on the social medias. You might remember a few weeks ago I was complaining about my childhood best friend becoming a loudmouthed preachy cunt. Every other day he would post something that would piss me off, and I would have to retaliate with some response that I spent way too much time on and worried about way too much.

Finally, my husband asked me, “What do you get out of your relationship with him?”

I had no good answer.

At one point in my life, he was the most important person to me. But that was 30-plus years ago.

Now he throws bible quotes at me like they are rocks, and I always feel the need to defend myself when he does.

But my husband was right; I do not need anything from him or any member of my friends or family that ever want to make me feel less than. Fuck that!

I have literally given advice in this very column to people asking me how to deal with unaccepting family or friends, and I quickly tell them that it is okay to cut toxic people from your life. But I was not taking my own advice.

So, I blocked him.

I actually blocked a few people, and I have felt lighter and, dare I say, happier since I did.
Some might say that I block people that don’t agree with my way of thinking or lifestyle because I cannot see other people’s point of view. Maybe. But I don’t care.

It just amazes me that people are losing sleep over me being happy, and I fucking love that. I hope ya toss and turn all night, ya cunts. (Said in my best Billy Butcher voice.)

So, block someone today! You’ll be glad you did! Remember to always love more, bitch less and be fabulous! XOXO, Cassie Nova