If I were a rich queen …

Hey y’all. I have just been sitting here mad because I didn’t win that big lottery a couple of weeks ago. C’mon universe! Please let me win the lottery! With my luck, the day I win the lottery, I’m gonna keel over dead the next day. (Thanks Alanis Morissette for putting that in my head.)

I’d have so many big-ass wigs! I mean, I already do, but you can never have too many big-ass wigs. I’d have every color — mostly reds — but never blondes. I look horrible as a blonde. It brings out the white trash in me, and I’ve worked hard to get away from that.

I would also need some land for my Texas-based home — something with maybe a few hundred acres — out in the country but not too far out — so I could have an animal sanctuary. I’d have a herd of goats that would produce artisanal cheeses. We would take in abused and abandoned animals and give them the life they deserve. Of course, I’d have a full-time staff to take care of the chores and stuff. I’m not exactly chore fish.

We would also have a quaint little cottage off the coast of Maine on one of those cute little islands, something with maybe four or five bedrooms, so we could fly our friends up and have some fabulous weekend getaways, drink wine and go whale watching. It would be close enough to Portland so we could still go to some fabulous restaurants and, of course, shop. 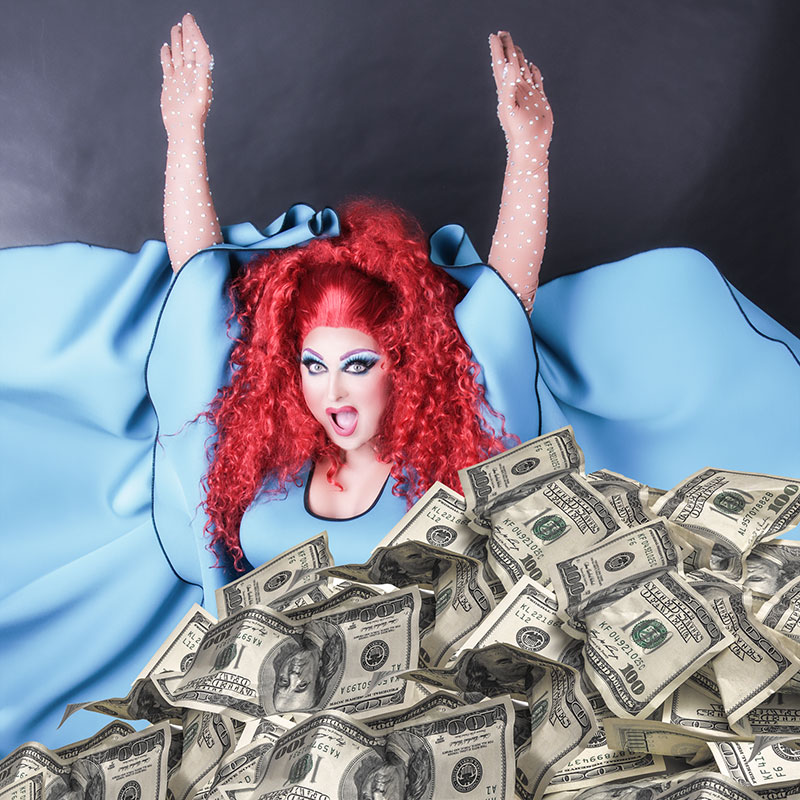 My husband’s dream is to buy a catamaran boat, big enough to live on and sail around the world. He is literally obsessed with that lifestyle. We spend hours watching YouTube videos of people that have sold all of their possessions, bought a boat and taken off. I’d love to be able to do that for him — and with him. When you love somebody, their dreams become your dreams.

He’s helped me live out my dreams of being a drag queen superstar, so at some point I would like to support him in his dreams.
I’d help out SO many of my sisters. Can you imagine the creativity that could come from some of my drag sisters if they weren’t constantly worrying about paying rent? Not that they don’t turn it already, but how wonderful would it be to be able to focus on being creative without having to be creative on how you are going to pay for your ideas.

The possibilities are endless.

Of course, I would donate to charities that mean something to me. In the past, I donated by performing in and hosting charity fundraisers. But it would be so cool if I could donate some big, crazy amount so the people that organize these events don’t stress over whether they are going to hit their goals. Trust me, I know how stressful that can be. My dream is to be like Shutterfly on Ellen and pass out giant checks like they were candy.

I would buy houses for our mothers and make sure they never had to work again and make sure they had plenty of money in their accounts to do whatever they want, whenever they want. My mom has a fear of retirement. She thinks that if she retires, she will die of boredom because she couldn’t afford to “do things.” I’d make sure she stayed busy by traveling and doing whatever the fuck she wanted to do. I hope she would just party her ass off. Get her drank on and go to the male strip clubs and make it rain on some hot, greased up men-zez.

Actually, maybe that is something we could do together — a real mother/son bonding thing.

I think I would get butt implants. I’ve always wondered what it would be like to have a bubble butt. I want a big ol’ juicy booty, but, alas, I suffer from that dreaded white boy disease, “noassatall.” I pad my ass for drag, but it would be nice, if I were ever to take up twerking, that something back there jiggled.

We would probably end up with a monkey. My husband has always wanted a Capuchin monkey. Yes, we would be those weirdos. But since we would be crazy rich, we would be called “eccentric” instead of “crazy.”

Hell, we are already weird for having a giant tortoise; we might as well go full-on crazy and get a monkey. I’m good with just rescuing dogs, donkeys, horses, elephants, tortoises, pigs and whatever else needs us.

Oh my God! We could have Christmas some place with snow! Snow that sticks and stays for more than a few hours! Hot toddies by the fire, and I might even try to ski. That all just seems so foreign to me. Plus, I love winter clothes. I have so many sweaters and cute jackets that I rarely ever get to wear because, you know, Texas.

We would have a full-time chef — one that would trick us into eating healthy. He or she would be so good at making fabulous, low-calorie and healthy food that we wouldn’t even notice we were losing weight. The chef would throw in surprise vegan or vegetarian meals that were so amazing, we would never even notice we were eating plant-based. I feel like that is what a lot of crazy rich people do. Oh, and plus, we’d have a personal trainer that was motivating AND fun.

We’d splurge on whatever car my husband wanted. He would definitely be one of those guys with a giant garage full of Lambos and Vettes and F15000s — ok, I don’t know car jargon, but nice ones that go fast. I’d be happy with my Jeep Cherokee, but he would insist on me driving something more elegant — like a Hummer. You know, something understated and demure.

So, if I win the lottery ever, you might hear from me less, but you would still hear from me. I will always feel a need to be onstage, and I like writing, so Cassie would still be around in one form or another. But til then, I’m here and rich in other ways.

Still, I’m off to buy a lottery ticket — fingers crossed!