Can you hear the fandango? 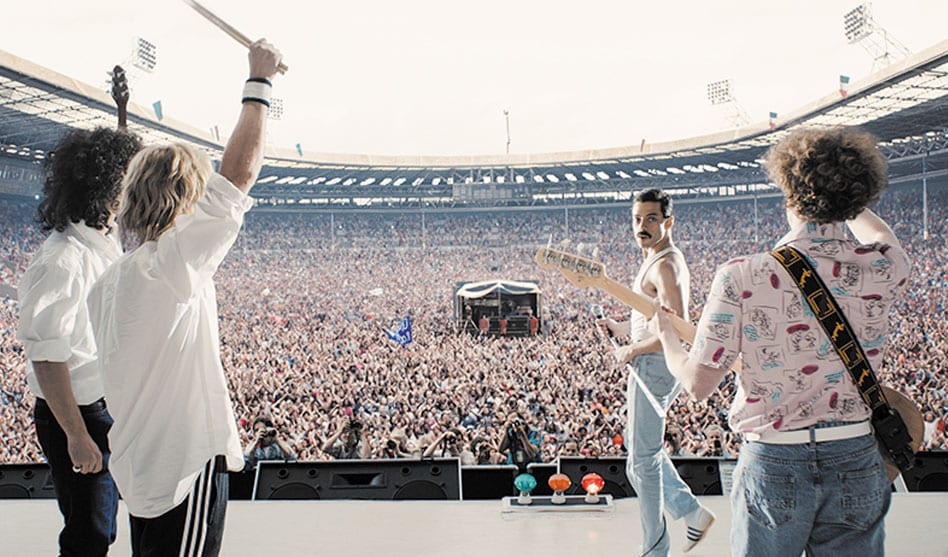 The historic LiveAid concert performance by Queen is a highlight of ‘Bohemian Rhapsody.’

The cliché about nerds and misfits is that they retreat into insular worlds like comic books and magic acts, maybe into alternative music scenes, where they establish their own culture of acceptance. Sometimes they meet with success, even stardom. But Freddie Mercury — born Farrokh Bulsara to Zoroastrian parents of Parsi descent — turned his otherness into one of the greatest rock acts of all time. And he may have fooled everyone at the time about what he was really doing.

Mercury may have been the first great example of hiding in plain sight. With his bandmates Brian May, Roger Taylor and John Deacon, he gave his band the name Queen, projected raw sexuality into arenas (not clubs) and even popularized gay leather culture without officially coming out of the closet until the day before his death, in 1991, from complications from AIDS at age 45. (In later concerts, he was a walking Tom of Finland poster; the Village People wish they had his balls.)

Bohemian Rhapsody, the much-anticipated big-budget biopic of Queen (but mostly of Mercury), tracks the creation of not just a collection of musicians but of a style of rock that had not been seen before. Queen as a group lasted barely 15 years in its original formation, but it transformed the landscape of pop culture.

This is not unfamiliar territory to the director, Bryan Singer, whose X-Men movies brim with suggested queer content (mutants as outsiders vilified for having different natures). Here, he gets to be more explicit, and do so in the context of an historic figure who really did revolutionize identity. How was Mercury able to get not just eccentrics and geeks but truck-driving heteros to sing along to his operatic, gender-bending imaginings? By being true to his clear vision.

It wasn’t easy, and a lot of Bohemian Rhapsody trods the familiar ground of artistic temperament, band in-fighting, drug abuse, self-destruction and eventual redemption. That comes with the territory. But Singer tells it with a compelling through-line that makes you care about how they did what they did. (One of the great touches: After the band finally releases the single “Bohemian Rhapsody,” Singer follows it with a montage of reviews… all trashing the song as nonsense. He lets history speak for itself, and gets a dig in to critics at the same time.)

Every element of the film comes together, from the costumes to the soundtrack to the makeup, but even under the big teeth, Rami Malek’s Mercury is a masterstroke of uncanny characterization. He doesn’t just look like Freddie, he seems to channel him (even though most of his singing was dubbed). During the climactic finale — the famed concert at LiveAid, which Singer virtually reproduces in its entirety — we see the band come together and go all out. It’s like being there, only made more powerful by all the backstory we know about Freddie’s life until then, but also after. Bohemian Rhapsody is a moving document not just of a man, but of an era haunted by AIDS. 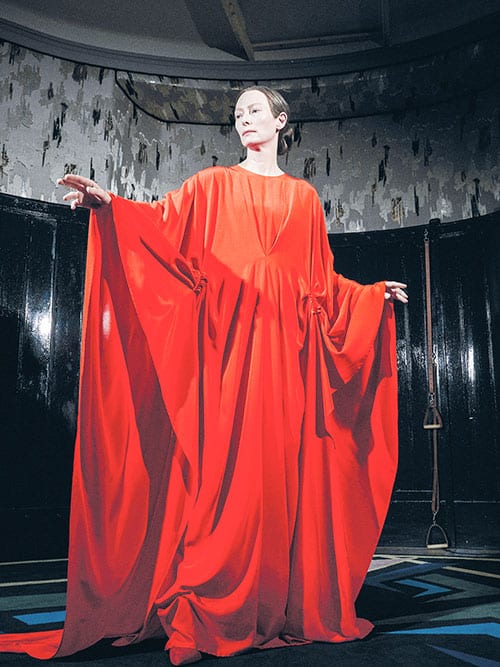 Tilda Swinton’s lizard-like movement is just one of the compellingly weird aspects of ‘Suspiria.’

Remakes are tricky things. Sometimes, recycling plots and characters for a new generation, or with new technology, makes perfect sense… at least when done well (see the recent A Star Is Born); sometimes, you just scratch your head and wonder, “What were they thinking?” (Gus Van Sant’s shot-for-shot remake of Psycho jumps to mind). I went into Suspiria open-minded but at least with the lingering feeling that the latter might be the case.

The original 1977 film from Italian director Dario Argento was a garishly bloodstained slasher that became a cult hit, less for its compelling story than for its stylistic excesses and camp outrageousness. Truth be told, I haven’t seen that one since I was a teenager, and was left more with impressions and images than a vivid recollection of plot points. So the idea of taking a film of shaky pedigree and redoing it just for the sake of redoing it — trash gratia trashis — filled me more with curiosity than hope, more suspicion than dread. What did Luca Guadagnino, himself an Italian director of mostly artsy, lustful dramas (Call Me By Your Name, A Bigger Splash, I Am Love) want to say?

I’m still not sure how to answer that. But I was fascinated by how he said it.

This Suspiria is set in 1977, in Berlin, a divided city being plundered by the terrorist group known as Baader-Meinhof. Into this ravished world comes Susie Bannion (Dakota Johnson), an American farm girl with a penchant for modern dance, auditioning for an acclaimed troupe run by the charismatic Madame Blanc (Tilda Swinton, whose presence in any movie ups the weirdo factor geometrically). Susie gets into the company but has a sense for a lot of strange goings-on; the girl she replaced disappeared under circumstances nobody is willing to talk about.

It doesn’t take long for the audience to get clued in: The academy is basically a coven of witches whose leader, called Mother, is dying, and it seems she needs a sacrifice to increase her powers… though to what end, we can’t be sure. We just know that what’s going on in the bowels of this old building is gruesome, demonic, violent … and very, very noisy.

Some horror films (including the original Suspiria) are wet; this one is crunchy. Where Argento’s film became synonymous with candy-apple blood and gaudy, supersaturated colors, Guadagnino’s palette is muted, dark, moody. And his style is more insidious. Even if you can’t watch some scenes, you can’t not listen to them.

But while the violence is visceral, often to the point of nauseating, it never feels exploitive. (It seems significant that the film is being released after Halloween — it’s not a fan-boy fright extravaganza, but a deeply unsettling quasi-feminist epic; at more than two-and-a-half hours, fully 60 minutes longer than its predecessor. It’s art-house horror.) I looked away many, many times… but I never walked out.

That says something about the performances, or at least the one by Swinton. The way she moves across the screen suggests those of both a dancer and a conjurer; it’s lizard-like. You’re not quite sure the arc her character will take, but I have to say, I didn’t see it coming where she ended up. Johnson, on the other hand, is not an actress for whom leaving an element of mystery is an option. She’s a flat, two-dimensional actress at best.

Maybe she would have done better with a better script. Guadagnino’s Call Me By Your Name (which won the screenplay Oscar earlier this year) was magnificent because it had so little dialogue, and what dialogue it did contain didn’t comment on what was happening onscreen, but rather undercut it. Suspiria is the opposite — it’s talky, but you’re not entirely sure what’s going on (even in the post-credits sequence). Guadagnino is riffing not so much on Argento as on Kubrick (The Shining), Polanski (The Tenant) and the paintings of Hieronymus Bosch. It’s a feverdream without logic, playing with you on a mental, physical and emotional level. It exhausts you.