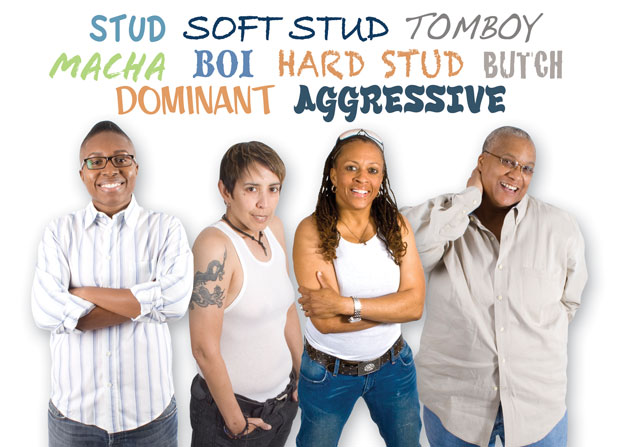 ‘Masculine of center’ women say that, all labels aside, it’s about being comfortable and confident in being yourself — whoever you are

TAMMYE NASH  | Senior Editor
nash@dallasvoice.com
At 53, Theresa Strong is used to being called “sir.” She’s accustomed to the double-takes when she uses a public restroom. She’s used to the stares. None of it bothers her.
“I’m very comfortable with who I am. I have been a tomboy all my life,” Strong says.
In “the old days,” Strong would have been called a “butch.” Although some people still use that term, today it’s more common to hear “stud,” instead. At least, in some places.
The terminology varies from region to region, from culture to culture, even from race to race, says Q-Roc Ragsdale, a Dallas lesbian who, like Strong, is considered a “stud.”
Ragsdale, who works with the group that stages the national Butch Voices conference, says that here in North Texas terms like “aggressive,” “dominant,” “boi,” “tomboy” and “macha” are common, depending on where you live and your cultural background. And then there are the “degrees” of butch: “hard stud,” “soft stud,” and so on.
But whatever label you use, Radsdale says, its about a “masculine of center” identity that is a natural state for some women but that, at the same time, can put them at odds with the society around them.
“It’s not male; it’s masculine. There’s a difference,” Ragsdale says. “A lot of people don’t understand the difference between sex and gender. Gender is so fluid. It’s a spectrum. … There are woman-identified butches, trans-identified butches. Some use male pronouns and some use female pronouns. Some are just butch in presentation. Some don’t like gender roles, and some live gender roles.
“You can’t make assumptions. You can’t generalize. Our community is so diverse, just like any other community,” Ragsdale says.

But one thing most masculine of center women share, she adds, is a sense of living outside the mainstream. And that can often leave them facing many disadvantages.
Butch Voices aims to help correct those disadvantages with its three-pronged mission focusing on physical and mental health, social and economic justice and community building.
As a masculine of center woman, “there are just so many different social norms that you challenge,” Ragsdale says. “You challenge gender norms. You challenge the mainstream notion of lesbians.” And those challenges can sometimes make life difficult.

When that happens, Ragsdale says, it can affect a person’s mental health. “Butch women often have to go through a double coming out. They have to come out as lesbians, then they have to come out again as butch women. Depending on where you live, geographically, that can be hard, and it can affect a person’s mental health,” she says.
Lesbians in general often don’t have the same access to health care, and it can be even more pronounced for butch women.
“It’s very uncomfortable sitting in that waiting room with a lot of women, and then they call your name and all the other women are looking at you, wondering why ‘that dude’ is there,” Ragsdale says. “And it’s hard for a lot of butch women to have the kind of conversations they need to have with a doctor.”
She cites, as an example, trying to explain to a doctor why she wouldn’t agree to taking birth control pills, which can be used to control menstruation as well as to avoid pregnancy.
“I had a girlfriend who went on birth control once, and it made her breasts bigger. [As a stud], I don’t want my breasts to be bigger. It’s hard to explain that to a doctor who is not understanding me and my relationship with my body,” Ragsdale says.
It’s even more conflicting for women in the category that used to be referred to as “stone butch.” A lot of butches, Ragsdale says, “don’t want anybody at all ‘down there,’ whether it be a partner or otherwise.”
Women who don’t fit traditional gender stereotypes also often find themselves unemployed or under-employed, especially when they are unwilling to compromise on their identity or gender presentation, Ragsdale says.
“I have a mentor in her early 50s who has always been butch, and even she has advised me that ‘you need to femme it up’ to get a job or keep a job. Personally, I am against that. I won’t do it. But I know a lot of people who do it, a lot of teachers especially,” Ragsdale says.
And then there’s that third prong of the Butch Voices mission: building community.
“We are working to create an environment where everyone can be themselves and still get the kind of health care and work they want and need,” Ragsdale explains. “A lot of that work is about awareness. There is a lot of mystery surrounding the butch identity; it’s plagued with so many stereotypes. That’s why I always encourage people to have the courage to ask questions.
“A lot of people are deterred from asking questions because they don’t understand us. But if they’d take the time to get to know us on a personal level, it would make a big difference,” she adds. “And that’s not just in the mainstream community. I think there are a lot of stereotypes and misconceptions about butches in the lesbian community, too. We have to start at home, in our own community. To the lesbians who don’t get it, who don’t understand us, well, I say just know that we are still women, still lesbians, still part of your community.”
Even among the masculine of center community itself, Ragsdale acknowledges, there are differences. “Every butch, every stud is different,” she says. “Sometimes people get caught up in labels. It’s like the word ‘dyke.’ Some people have reclaimed ‘dyke.’ Others hate the word. What I say to them is, at what point do we stop worrying about the semantics and just get things done? We have to celebrate all our identities and work for all the community and not spend time debating the labels.”

But while masculine of center women face any number of challenges, that more masculine identity and presentation also “comes along with some male privilege,” Ragsdale says. And with that bit of male privilege comes responsibility.
“If you are a butch, or a stud, and you get that bit of male power and privilege, then you have a responsibility to use that power and privilege in the right way and not abuse it — not in your personal life, and not in the world,” she says.
And in the same vein, butch women need to pool that male power and privilege to work for positive change for the community as a whole.
“We have got to get our whole community more involved [in the battle for LGBT equality],” Ragsdale says. “If you go to a meeting or event for one of the more mainstream LGBT groups — like Lambda Legal or Human Rights Campaign — you’d be really hard pressed to find any butches or studs. Maybe that’s because the mainstream LGBT community looks down on us. But maybe it’s because we don’t try to be involved.
“We have to focus on mobilizing our base. We can’t sit around and cry about how we aren’t being included if we aren’t even bothering to show up in the first place,” Ragsdale says.

Ragsdale, like Strong, can trace her stud roots back to her childhood. She remembers her mother giving her a Barbie doll, when what she really wanted was the Ninja Turtles and the G.I. Joes her brother got. Still, she played with the Barbies, wanting to fit into the role her parents and society had mapped out for little girls.

Eventually though, Ragsdale came to terms first with her sexual orientation and later with her more masculine identity as a stud. It’s all about, she says, finding that comfort level that allows you to be who you are.
Eva Rivera and Michelle Paris both describe themselves as “soft butches.” While they may lean toward the more masculine end of the gender spectrum, that doesn’t mean they always ignore the more feminine accoutrement, like makeup or jewelry.
“I guess a soft stud is kind of a mixture of femme and stud,” Rivera says. “I am tomboyish. I always have been. I came out at 19, and the way I dressed then was sporty — you know, tennis shoes and baggy jeans. I never wore a dress, and I have always been attracted to feminine women.”
Being a stud is partly about the way a woman dresses and her mannerisms, Rivera says. “You take on a role. But we’re not all the same. Being a butch or a stud, being hard or soft or whatever — it’s just what makes you comfortable,” she adds.
Paris agrees: “I am a soft butch. That’s just the way I am. Underlying that is who I date. I like feminine women. And in a relationship, I am the more dominant one. But I don’t have to make a big deal of it.
“I am the same with everyone — family, friends, people I know, people I don’t know. I am the same; I am myself,” Paris continues. “When you see those women who are always trying to prove what studs they are, that’s because they have low self esteem. They make it more of an issue because they are trying to prove something, to themselves or to other people. Me, I don’t care. I am who I am.”
And that, says Strong, is at the core of the issue: Self-esteem and confidence and a sense of self that doesn’t rely on labels or clothes or mannerisms.
“You have to be comfortable with yourself. You have to be confident in yourself,” Strong says. “We [as masculine of center] women are so diverse. Everything that women are and do, we are and we do. My best friend is a stud, but she has a son, so she’s playing all the roles.
“The fact is, I dress the way I dress because it’s comfortable for me. You like who you like, and I like very feminine women. I am courting a woman right now and she is totally femme,” Strong adds. “This is who I am. I am not playing a role. This is just natural for me. We may be butch or studs or whatever word you want to use, but at the end of the day, we take off our clothes, and we’re still women. A lot of people forget that.”
This article appeared in the Dallas Voice print edition March 4, 2011.