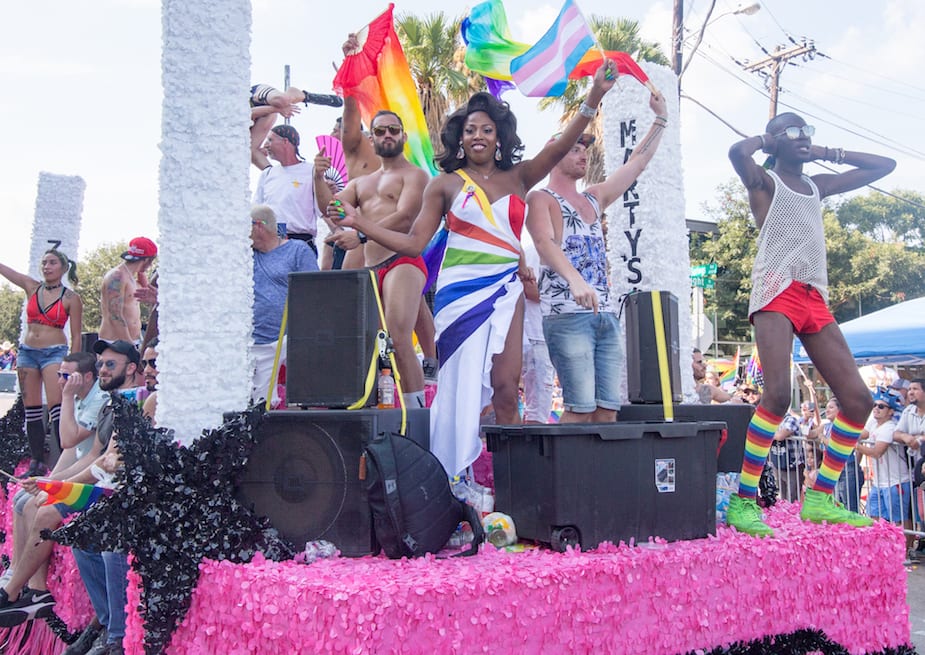 The Marty’s Live float in the 2018 Alan Ross Texas Freedom Parade on Cedar Springs. In 2019, the parade moves to Fair Park in June. (Photo by Chuck Marcelo)

Dallas Pride events — including the Music Festival and the parade — will be moving to the first weekend in June in 2019, and both events will be held at Fair Park, Dallas Pride and Dallas Tavern Guild Executive Director Jarron Turnbow confirmed in a press conference this morning (Monday, Dec. 17).

“While we will never forget and will always be grateful to Judge Jerry L. Buchmeyer, who was the first federal judge to rule the Texas sodomy law unconstitutional in September 1983, the month of June has become known nationwide as LGBTQ Pride Month,” Turnbow notes in the press release. “LGBTQ history has been made in the month of June in numerous years, including several recent U.S. Supreme Court rulings that validate and empower our community.

“This year, Dallas will open LGBT Pride Month with a bang.”

Turnbow also stressed that changes in Pride in 2019 are “stepping stones” toward the goal of turning Dallas Pride into a “world-class LGBT Pride celebration by 2020.”

Dallas Tavern Guild moved its November meeting to the Rose Room in the evening last month to give more people a chance to attend and voice their opinions about plans to move Pride to June and to Fair Park. The Tavern Guild had already voted to make the move by the time of that meeting, but, as Turnbow says in the press release todau, “We heard you, we took notes, and we are hopeful that our plans for 2019 and 2020 will make you proud.”

The Miller Light Music Festival in Fair Park, including the Family Pride Zone and Teen Pride, will be held Saturday, June 1 next year, from 11 a.m. to 10 p.m. in the Esplanade and the Centennial Building at Fair Park.

“The new venue provides more than triple the space to add more activities and include more organizations that serve and support the LGBTQ community,” Turnbow says.

The Centennial Building offers “a massive space” that is air conditioned, has restrooms and “shelter in the event of inclement weather,” he continues. It is also handicap-accessible with “ample parking for everyone.” But those who choose not to drive to Fair Park can take advantage of the DART rail line, which stops just “a stone’s throw” away from the building.

Turnbow adds, “Fair Park is ecstatic to work with us and joins our vision for growing into a LGBTQ Pride celebration that will rival other major cities.”

Turnbow says that the city will be completing a streetscape improvements project on Cedar Springs Road between Douglas Street and Oak Lawn Avenue, the parade’s traditional route, making the street’s availability for the parade questionable.

While the project will bring “massive improvements” to The Strip, “with larger sidewalks, more lighting, beautification improvements and more,” he notes, “we cannot safely have a parade through a major construction zone, and we do not want to impede on the improvement project. To ensure that the parade happens, we have decided to relocate the parade to Fair Park for 2019.”

Turnbow encourages the public to watch the

and social media pages for further news and announcements regarding Pride for 2019.